Before we start, a word about some of the airguns shows that are coming up. First there is this:


NRA Annual Meetings
April 13-15, 2012
St. Louis, MO
This is like a mini SHOT Show that’s open to the public. It has a 10-meter airgun range (run by Pyramyd Air) for shooting manufacturer-supplied airguns (there’s a charge for shooting). Free to NRA members, $10 for non-members. Click for website. Pyramyd Air is giving away free tickets to the show. If you’re not an NRA member and want to get in for free, read the announcement on their facebook page and follow the directions.

Okay, on to today’s report.

I didn’t think this day would come so soon, but I’m going to show you what happens when you shoot the FWB 300S at 50 yards. Or more correctly…when I shoot it! I say that because 50 yards is a distance at which all false pretense of accuracy falls away. Fifty yards is a harsh challenge for a 650 f.p.s. air rifle like the 300S. All the wonder of those tiny groups at 10 meters becomes doubt that you can even shoot this far when the range stretches out more than four times as far.

I needed a windless day and as luck would have it, I got one. Or at least one where what little breeze there was could easily be managed. When I got set up to shoot, it was about 8:15 a.m., and the breeze was running from still to an occasional puff of about 1 m.p.h.

I used the sandbag rather than the rifle rest because I already knew the 300S did well on it. I first fired about four rounds to warm the action and to “awaken” the mechanical parts. I’ll talk a lot more about that in a PCP primer I’m writing, but even spring-piston guns have to wake up if they’ve sat for more than a couple hours.

I’m shooting the JSB Exact RS pellet for this test. We all agreed that to test the gun with wadcutters at this range would be unfair, because wadcutters are known to be inaccurate after about 25 yards. And the RS pellets proved to be the most accurate domed pellets in the accuracy test I did.

For targets, I wanted to use the 50-foot timed and rapid-fire pistol targets that I always use at 50 yards. The bull measures just larger than 3 inches, which is a good size for most peep sights at 50 yards. I like these targets also because they measure 10.5″x12″, which gives a lot of room for the pellets to miss the mark and still be seen. I knew the pellets would drop when going 50 yards, and I’d planned to stack two targets — one above the other, so I could aim at the top bull and possibly hit somewhere on the target below. But I only had two of these targets! I’d failed to pack enough of the right kind of targets in the range box. Though I had plenty of targets, only two were what I wanted.

No problem, I thought. Years ago, I figured if this ever happened I would use 10-meter pistol targets instead of these larger targets. They’re on smaller paper, but I could still place one above each larger target to use as an aim point. Ten-meter pistol targets have a bull that measures 2.35 inches across. It looks similar to the larger bulls when you look at them casually, but at 50 yards the difference through the sights is noticeable. They’re too small in the front aperture, which leads to possible aiming errors. I could see that on the first group I fired and also when I examined the group afterwards. 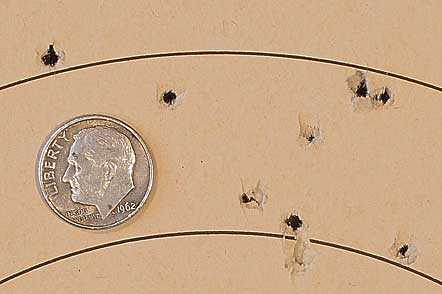 The first target suffered from an aim point that was too small for precision. It measures 2.407 inches between the centers of the two holes farthest apart.

As I predicted, the group dropped about eight inches at 50 yards, so the group was printed on the target below the one I aimed at. I knew that the smaller bull was too small to work well at this distance. But there was another way of doing this.

I still had two of the 50-foot timed and rapid-fire targets stapled to the target backer; and underneath everything, I’d stapled a 2’x4′ sheet of plain target paper. It’s the back of a silhouette target that I always use when I’m unsure of where my bullets or pellets will go. The plain light paper allows me to see the holes even though they don’t strike the intended target. Because it’s so large, it covers the entire target backer; so, unless the rifle is really out of whack, I’ll see where the pellets are going.

Then, I proceeded to shoot another 10-shot group of unsorted pellets at the larger bull on the left, knowing that they would strike the plain target paper below this target. They landed about two inches below the target and gave me a perfect group of 10 on the plain paper.

This time, the bull was filling the front aperture as it should, so the group was much better. It measures 1.689 inches between centers. Remember, this is a 10-shot group. It’s about 40 percent larger than a 5-shot group fired under similar conditions. That doesn’t mean that it’s exactly 40 percent larger; and, yes, it’s possible for the first 5 shots to land the farthest apart, so that a 10-shot group doesn’t grow any larger. But the probability that you’ll do that is very low. If you keep on shooting after 5 shots, it’s more likely that your group will continue to enlarge until it’s, perhaps, 40 percent larger after 10 shots than it was after the first 5. 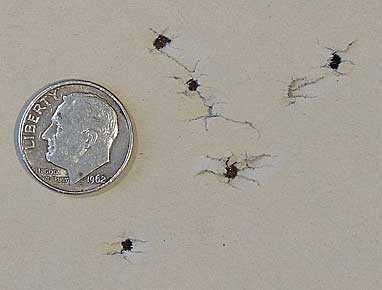 Ten-shot group at 50 yards with unsorted pellets. Ten shots made a 1.689-inch group. Nine of the shots went into 1.015 inches. The larger aim point helped reduce the group size.

Some notes on sorting the pellets
I had sorted the JSB pellets the evening before going to the range. Because JSB pellets are so accurate, I thought they’d also be very uniform, but they weren’t. To get 20 pellets that all weighed 7.30 grains, I had to sort through almost 40 pellets! The weight ranged from 7.10 grains to 7.40 grains. While that isn’t as large a spread as other pellets, it was still a surprise. I thought I might find two or three pellets that didn’t weigh the same, but it was worse than that.

By this time it was around 9 o’clock, and the breeze was picking up. I had to wait for breezes of 3 m.p.h. to die before shooting. When they did die, though, the air was perfectly still again. This time, 10 pellets that were sorted by weight grouped in 1.383 inches. That isn’t much better than the unsorted pellets, and it was not the result I’d expected. 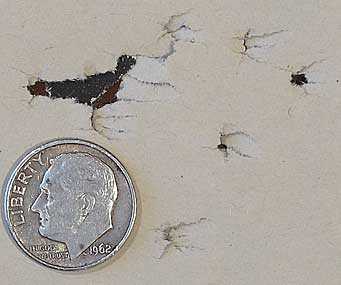 Ten-shot group of weight-sorted pellets at 50 yards made this 1.383-inch group. Not much improvement over the unsorted pellets! You can see a very small 5-shot group at the left of the larger group. That group measures 0.577 inches between centers, but I can’t say that it indicates anything.

What happened?
This test didn’t turn out as I’d expected. Either the weight of the pellets doesn’t matter that much, or something else was happening to skew the results. I think I may know what that something is. It was apparent as I shot that I was unable to detect any slight canting of the rifle. There’s no bubble level on this rifle. And look at all three targets. They’re all wider than they are tall, which is a giveaway that I was canting the rifle randomly. In fact, this is such a telling result that I believe I have to rerun this test, just to eliminate the cant!

I’ve conducted a host of special cant tests in the past to learn about the effects of canting the rifle; plus, when I shoot my Ballard rifle — which has a bubble level attached to the front sight, it’s always difficult to center the bubble because it’s so sensitive. So, canting is a known problem with which I have some experience.

By the time I completed the group of weight-sorted pellets, the breeze had picked up and the day of testing this pellet rifle at 50 yards was over. But like I said, I’m not satisfied with these results and will have to run the test again. Next time, I’ll mount a scope, just for the additional precision it will give, plus it’s lot easier to use a bubble level with a scope than with a peep sight. 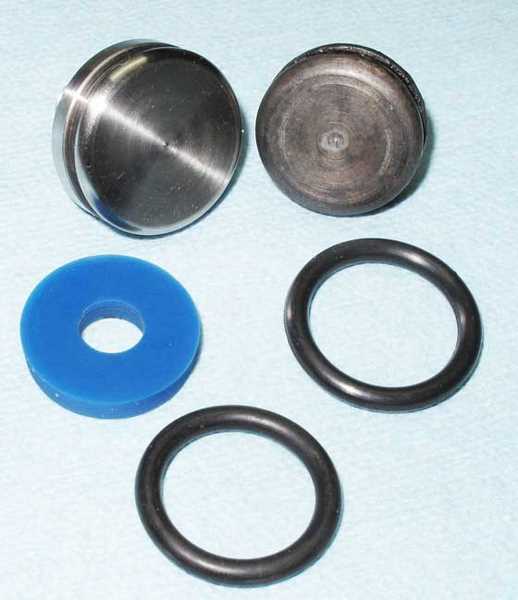 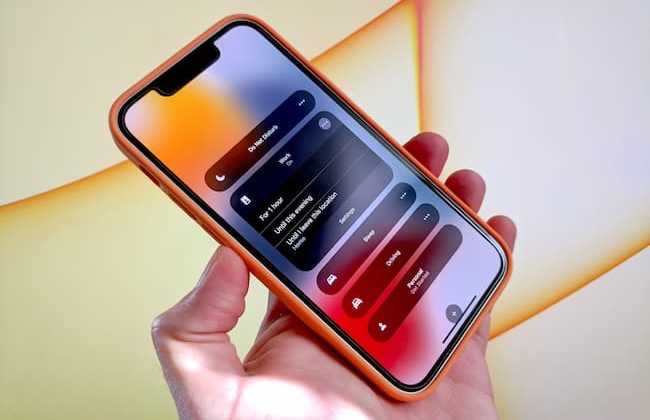 The Pitfalls of Taking Your Phone into the Woods