Hatsan’s Torpedo 155 underlever is a large and powerful spring-air rifle. This is the actual test rifle. Isn’t it beautiful?

Today, we’ll begin a look at an underlever air rifle from Hatsan — the Hatsan Torpedo 155. This rifle has a beautiful checkered right-hand walnut stock. Those Turks can really work wood!

There are two small sling swivels attached to the stock. One is in the center of the butt at the bottom, and the other is on the left forearm. Inside the loops, they measure .75″ (21 mm), which is the European size for a leather carry strap. American shooters need to be aware of the smaller size so they can buy the appropriate slings. And, given the weight of the rifle, you’ll want one. The average size of an American sling is one inch.

The sling swivels are the smaller European size. The rear swivel is under the butt.

I cannot find a serial number on the rifle I’m testing. I’ll look into this for you; because if there’s no serial number, there can be no extended warranty! The end flaps of the box carry no number, nor is there any documentation inside that has it.

The rifle is .22 caliber. The manufacturer rates the gun at 1,000 f.p.s. in this caliber, so I’ll test it with a wide range of pellet weights to check the power potential.

This rifle is BIG. And I don’t mean Diana RWS 350 Magnum big or Beeman R1 big. I mean really BIG! According to Hatsan’s own numbers, the gun weighs 11 lbs.; and on my balance-beam scale, the test rifle weighs 10 lbs., 12 oz. The variability of wood weight is what makes the weights approximate on rifles that have wood stocks.

An overall length of 47.6 inches puts the Torpedo 155 in the upper 98 percent of guns for length, but the thing you really notice when you hold it to your shoulder is the forward weight bias. Everyone will notice this from the first moment they pick up the rifle, so be prepared for it. A heavy scope may alter the balance a bit, but it will also add weight of its own.

The length of pull without the three extenders is 14.75 inches, which is the maximum I can use, so I won’t be adding anything. Like other higher-end Hatsans, the Torpedo 155 comes with the shock absorber system (SAS), the adjustable Quattro trigger and the Triopad rubber recoil pad that comes with the three spacers I mentioned.

All metal is finished with a deep black oxide, and the surfaces that are polished have a matte sheen. A brass button under the forearm and forward of the triggerguard is for unlocking the underlever after cocking. So the anti-beartrap is built into the cocking mechanism, even though the method of loading negates its need. I will get to that in a moment.

The underlever latch has two spring-loaded buttons on either side of the rifle that are pushed forward to release the lever. It takes a lot of effort to drop the lever, but it can be closed without using the latch. That makes noise, though, so use the latch if you want to be quiet. 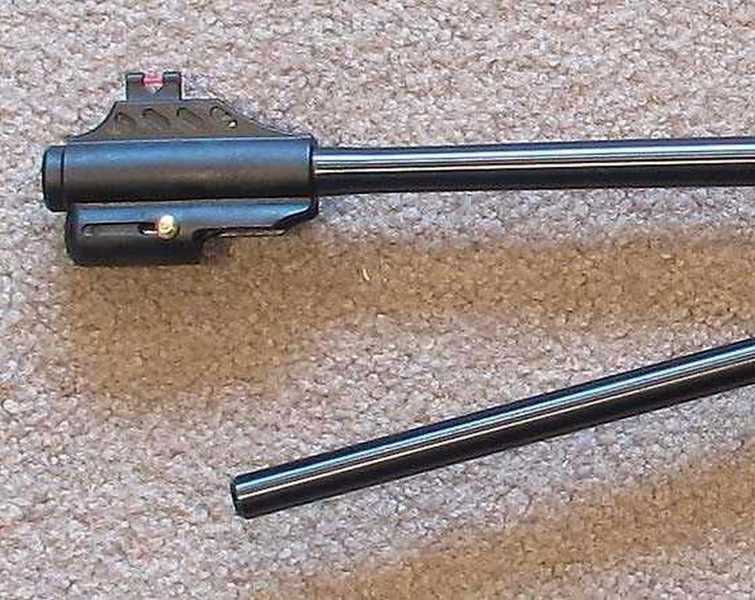 There’s a brass button on either side of the underlever housing. Push it forward to release the lever. The lever can be closed by snapping it shut.

The underlever has an anti-beartrap mechanism built in. Once the lever is cocked, a brass button under the forearm must be pushed to release the lever so it can be returned home. 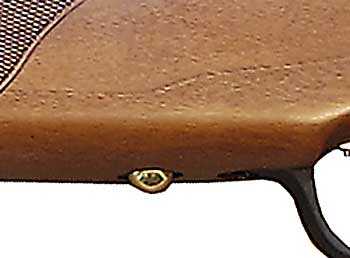 Once the lever is cocked, the brass button in front of the triggerguard is pushed to unlock the lever so it can be returned to the stored position.

Sights
The scope base on the rifle accepts both Weaver and 11mm dovetail scope rings, and there’s a scope stops that comes in the box but is not mounted to the rifle. The Torpedo also has finely adjustable open sights that have fiberoptic inserts, front and rear.

Cocking effort
I’m going to estimate the cocking effort is between 60 and 70 lbs. I’ll weigh it for you in the velocity test, but I had to cock and fire the rifle once when I was looking for the serial number and could not avoid mentioning it.

The breech
And now for the big news — the breech that puzzled me so much at the SHOT Show. Well, what it is, is simply the rear of the whole barrel. When you work the brass knobbed “bolt,” you move the entire barrel forward, giving access to the breech for loading. That’s why I said it would be impossible for this rifle to have a beartrap accident, because there’s no sliding breech. Your fingers have nothing to get caught in, because the area behind the breech in the picture is ahead of the air transfer port. Maybe Hatsan put the mechanism in just in case people let go of the cocking lever when loading the pellet, so the sear wouldn’t release the lever and slap it down on their hand. That’s a safety violation of proper airgun handling; but they’re wise to put it in, for not everyone follows safe handling procedures. 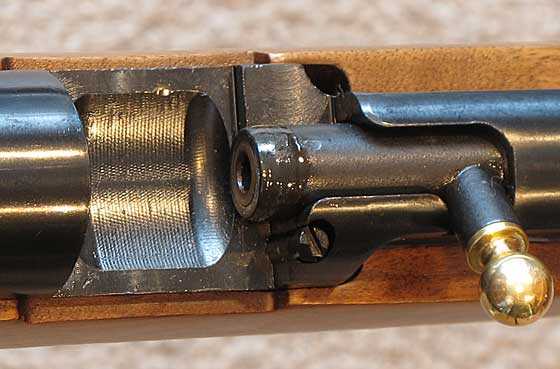 To access the breech for loading, the whole barrel is rotated and pushed forward. This can work if the barrel always returns to the same position when locked closed. Because of how this works, you don’t want a scope hanging over this area where your hands have to work the bolt.

On the other hand, the whole barrel moves when the gun’s loaded! So, it’s lying loose in the gun. Only when the bolt is closed does it draw up tight and hopefully index the same every time. That can be bad if it doesn’t index in the same place every time — as in the case of the Anics Skif A3000 air pistol. Or it can be good if the indexing is always the same — such as with the M1911A1 pistol. The only way to know for sure is to test the rifle, and that’s exactly what we’re going to do.

This is certainly a different air rifle. Because I’ll probably never test each and every Hatsan model, I’m counting on this Torpedo 155 to be representative of the entire Torpedo line.

Since this rifle has both open sights and a great scope base, I’ll test the rifle both ways — with open sights and then with a scope. That’ll give me more time to become familiar with its handling, and hopefully that will mean I can see it at its best.

Hatsan has made another interesting rifle for us. The Torpedo 155 is large and powerful, have no doubt. If it’s also accurate, hunters will have another magnum spring gun to add to their wish lists.