I found this rifle at the 2012 Roanoke Airgun Expo a few weeks ago. The thing that caught my eye was the beauty of the finish — and that’s a stretch for most Chinese air rifles. Especially the vintage ones, which this most assuredly is.

I made the mistake of commenting to the dealer that it resembled an older TS-45 sidelever like the ones Randy Mitchell is selling, and I received an earful of protests that it was most definitely NOT a TS 45. And it really isn’t; but when you see the two guns side-by-side, you know their makers at least saw the competition.

The TS-45 appears to be the Fast Deer’s close relative. This test will determine how close.

The Fast Deer (or, as some call it, the Fast Dear — referring to their wives or girlfriends?) is finely finished, as I noted. The metal parts are deeply blued and the wood is very shiny. The fit of the action to the stock, however, leaves little doubt as to the rifle’s origins. The label on the box says the gun is made by the Zhongzhou Machinery Plant China North Industrial Corporation, or Norinco, as it is known in the U.S. Norinco is to China what Ishmash is to Russia — a huge arsenal that also makes items of a commercial nature.

When Mac first saw the gun, he remarked that the sidelever release appears similar to the one on the FWB 300S. Because this is a Chinese air rifle, you would expect the release to require a huge amount of pressure to operate, but it doesn’t. It’s smooth and as light as it can be for what it does. 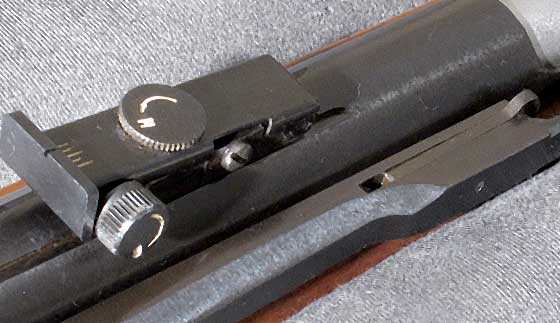 The rear sight looks robust enough, but the adjustments are vague. You can make out the parallel dovetail grooves in the spring tube that might serve as a scope mount base. Also, note the sidelever release that works smoothly on the test rifle.

I haven’t removed the action from the stock, but so far the only marking I see on the gun is the serial number stamped into the left side of the spring tube. So, how do I know it’s a Fast Deer? Simple — it came in a Fast Deer box with a Fast Deer owner’s manual.

The graphics on the box tell you the name of the rifle.

As I was admiring the rifle (I was not yet its owner), the dealer told me that it shoots at an honest-to-goodness 715 f.p.s. The TS-45 I tested for you earlier this year launched RWS Hobby pellets at an average 552 f.p.s. This gun may do a lot better than that.

Two things I can tell you for certain at this point. First, the rifle has an incredibly heavy trigger. It feels like at least 12 lbs., but it could be even more. There isn’t any creep in the single-stage pull, but the release is much heavier than it should be or even needs to be. The other thing I can say is that it feels like a tuned gun when it fires. It isn’t tuned, because it still smells like bacon frying after a few shots, and that smell is a telltale sign of Chinese grease. But there’s very little vibration and recoil with the shot. It feels like there’s a wonderful air rifle struggling to get out of the Fast Deer.

The sights are a hooded square blade in front and an adjustable rear notch that sits too close to the eye. Your eye cannot focus well on a notch that close, so aiming should be something of an adventure. I do note, however, that the TS-45 rear sight sits in the same place, and I managed to do okay with it. As nice and crisp as the rear sight appears, though, the detents on the windage adjustment knob are soft and mushy — and on elevation, they’re nonexistent.

The rear sight sits on parallel rails that might be pressed into service as a scope mount base. There doesn’t appear to be a scope stop on the gun, but as smooth as it shoots, maybe you don’t need one.

When the rifle is cocked, you can both hear and feel a ratchet dragging scross the coils of the mainspring. That ratchet holds the sidelever in case you slip before the gun is cocked. Once cocked, though, there doesn’t seem to be any anti-beartrap, so use the safe cocking method I recommended for the TS-45. 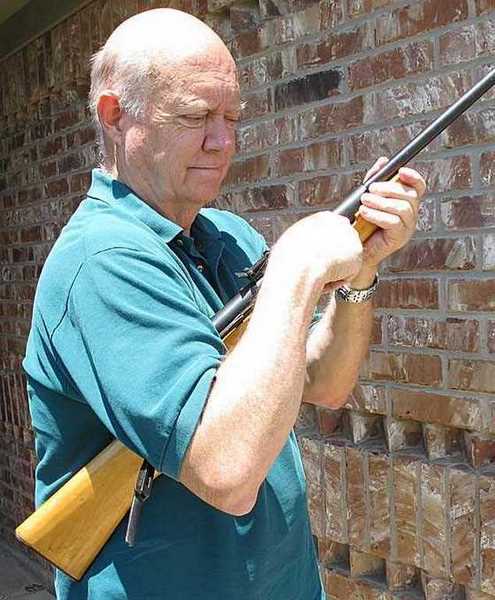 The sidelever is safely restrained by your arm during loading. If the sear should slip, you might get a welt on the arm, but your digits would have time to get away from the sliding compression chamber.

I was ready to buy this rifle when I overheard another dealer telling this dealer that he also had a Fast Deer on his table. It didn’t have a box, but I thought I’d better check it out first. So, I wandered over to his table where there, indeed, was Fast Deer No. 2. It wasn’t in as good condition as this one, though, and the price was a little higher. I returned to the first dealer and bought the gun seen here for $40.

Some people might ask for a price break on a deal like that; but as far as I was concerned, the dealer had already marked it with his best price. It was cheaper than the other rifle in lesser condition and was only $40. That’s two trips for a couple to Pizza Hut. How could I go wrong?

What’s different?
The single standout difference in the Fast Deer over the TS-45, other than the overall level of quality, is the manual safety. On the Fast Deer, the safety is a switch on the rifle side of the stock, just above the trigger. The TS-45 has no safety. 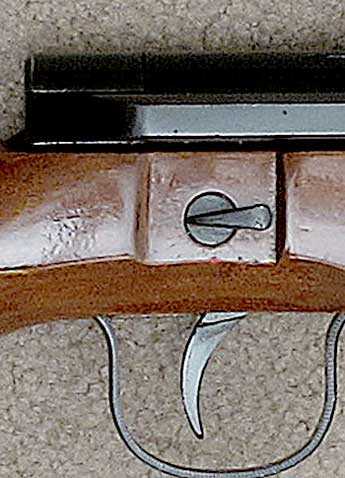 The safety is on the right side of the stock, above the trigger. It’s set to fire now.

I can tell you that the Chinese pellets I’ve used thus far fit the bore well, so it doesn’t seem to be oversized like so many Chinese air rifles are.

More cheap Chinese airguns, B.B.?
I think that hope springs eternal in the human breast. I know it does in mine! I always hope that I will find some overlooked little wonder than shoots well, is accurate and doesn’t cost a fortune. I have very high standards, and the trigger on this rifle is already a bust — but I’m curious to see if there’s a diamond somewhere amongst all this coal.

I would like to hear from those who own Fast Deer air rifles, because I think they must like them a lot. Either way, though, please let us know what you think of this airgun.

One last thing: Why “deer”?
Edith and I wondered why the term “deer” was used…and this also made us wonder why Leapers (makers of UTG optics, bipods and more) uses a deer for their logo. Plus, their name relates to the leaping of deer. After a bit of research, we found a site that explains this…if the data is true: The deer is a Chinese symbol for longevity. The word for “deer” in Chinese is “lu” which could also be translated to mean “revenue” or “earnings.” It’s a mark for desire for fame, recognition and enduring success. If any of you are fluent in Chinese culture and language, maybe you could shed some light on this.