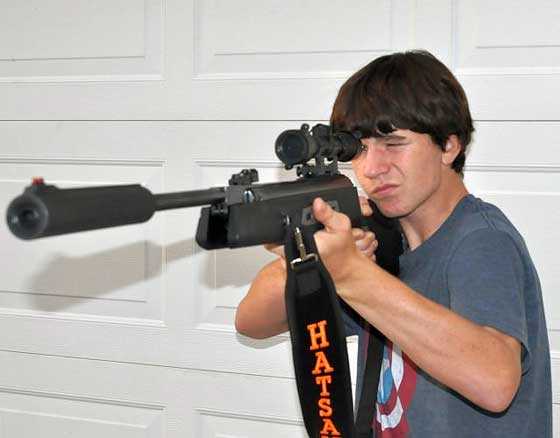 Brett Latimer is the Big Shot of the Week on Pyramyd Air’s facebook page.

Today’s report was influenced by blog reader Kevin, who suggested that I use some of the old articles I’ve written in the past. Well, I’m always open to something that makes my life easier, plus I’ve had access to some of the most unusual airguns in the world over the years. So, today, we’ll take a look at one of them.

I wrote this article in 1999, and I’m not changing anything in it — apart from making some corrections to spelling, grammar and punctuation. It was originally published in Airgun Revue 4.

Someone said they wanted to see how Tom wrote in the old days. Well, here we go! 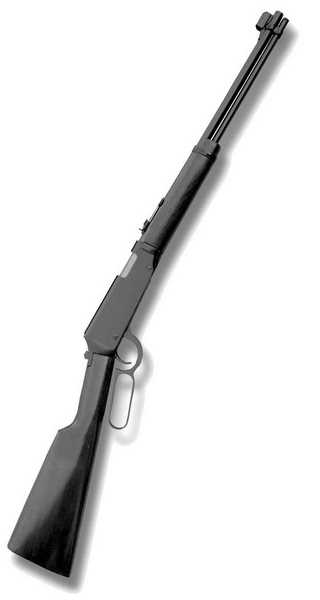 Erma’s ELG 10 was a single-shot underlever spring gun, though it looked like a western repeater.

There are never enough models to satisfy the curiosity of collectors of very finely made airguns. They struggle along, first discovering 10-meter guns, then German sporting models and finally coming to rest with the finer British guns like the Webley Mark III or the BSA Improved Model D underlever. And that’s where many believe the road ends. Unless they want to branch out into tinplate and cast iron toy guns, they think they’ve seen it all. But they have not yet turned over all the rocks. Not until they own an Erma ELG 10 will their collections be complete.

To look at it, the Erma is a curiosity. You find yourself looking for the plastic parts or where to put the CO2 powerlet. Your eye tells you the gun is solidly built, but your doubting airgunner’s mind tells you it can’t be as nice as it seems. It looks too much like a Daisy model 1894. You keep waiting for the rug to be pulled out from under you, and it never is. The ELG 10 is exactly what it looks like — an extremely high-grade spring air rifle built from all wood and metal, in the best Winchester tradition. In fact, the Winchesters of today should be made so well!

The gun came to the United States in the late 1970s through the Beeman company, where they were sold for a short time. Their retail price of over $300 was what killed them, coming as it did at a time when R1 rifles sold for the same money. The ELG 10 is a low-powered plinking rifle, and few people were willing to shell out big bucks to buy something that couldn’t even keep up with a Diana model 27. Never mind the fact that they produced the same power as the FWB 300 target rifle, which was selling for twice as much. The Erma simply looked too much like a toy; and until you hold one in your hands and realize what it is, there’s no sale.

There was an article in American Airgunner in 1991 about the Erma that spawned some desire for the gun. After that, people were placing ads to buy one in Airgun Ads and elsewhere. I even had the strategy of watching the Gun List ads for Erma firearms, hoping that one would mistakenly pop up. It’s a habit I haven’t shaken to this day.

My first ELG 10 came from Airgun Ads, and I paid plenty for it — $550, as I recall. It came with a Beeman box and was in pristine cosmetic condition, but the power seemed low. The gun was shooting lightweight Hobby pellets only in the low 400s. Knowing that Erma is not primarily an airgun maker, I reasoned that the gun might well have leather seals; so, I lubricated mine with Beeman’s Chamber Oil and saw the velocity jump up to the mid-600s…where it belonged. Despite what the article in American Airgunner said about the gun growing tired over time, all it usually takes to rejuvenate one is a little oil on the seal. I still don’t know if the seal is leather or not, but the gun responds to oil as though it is.

As luck would have it, after paying so much for that first one, I stumbled across a SECOND Erma just two weeks later. This one was in a local gun store, where they were asking $175. I bought it, figuring I could average the cost of the two guns and realize two good bargains. It, too, was shooting in the 400s until a shot of chamber oil fixed things.

Although the rifle is short, at just 37.75 inches, it’s a handful. It weighs six full pounds, and never does your hand touch anything except wood and metal. It’s as accurate at 10 meters as a Diana model 27, which validates the integral scope rails machined into the top of the receiver. Although the iron sights are quite nice, the Erma is the perfect gun on which to mount a small scope, like Beeman’s SS3 or SS1.

Firing behavior is a quick forward jump with a small but noticeable spring vibration. It comes at the end of a 6 lb., 12 oz. trigger-pull that’s crisp but definitely not light. Part of that extra weight is safety engineering, no doubt, because this rifle is loaded with it.
The gun is cocked by swinging the finger lever all the way forward. Although it looks like a lever-action firearm, the cocking lever is really much longer than just the finger lever because it has to provide some mechanical advantage.

The finger lever is part of a longer underlever that retracts a sliding compression chamber, opening the way for loading the breech.

This is not a gun you hold up to your shoulder and just flick the lever with one hand. No, indeed. You dismount it and work the lever with one hand while restraining the rifle with the other hand and your leg. Not that it is hard to cock, for it isn’t. It cocks with about the same 17 lbs. of effort as the FWB 124 breakbarrel rifle, but it’s not a job for one hand, alone.

As the gun is cocked, the sliding compression chamber retracts, just like on a TX 200 or HW 77. As it retracts, a clicking ratchet catches the chamber at intervals, so there is little possibility of an accident should your cocking hand slip.

When the chamber is all the way to the rear, there’s access to the rear of the barrel for a pellet to be inserted. It’s a tight fit, but elevating the muzzle helps you balance the pellet on your thumb until you make contact with the barrel. All the while, the sliding chamber is retained by an anti-beartrap mechanism to keep you from chopping off your digits. 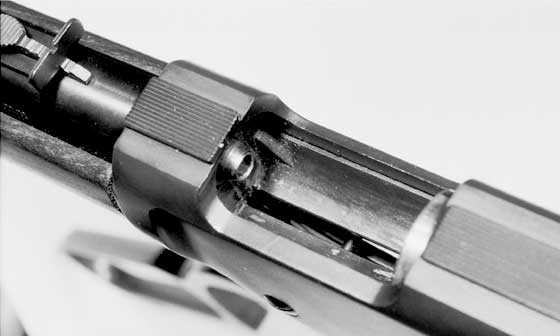 The compression chamber is retracted, leaving lots of room to load the gun. The slot at the bottom is for clearance for the cocking linkage.

The cocking cycle is completed by returning the lever to the starting position. To shoot, upward pressure must be maintained on the finger lever, just like so many lever-action firearms. There’s also a safety behind the receiver, profiled to look something like the hammer on a firearm. It’s not automatic, but you can put it on at any time. The way it functions is very strange. Instead of blocking or disconnecting the trigger, it simply pushes a steel bar straight down through the bottom tang, where it props the finger lever from being squeezed closed. Thus, they use one safety device to force engagement of a second device. It works fine, which says a lot for the Erma engineers’ confidence in their design.

So, the gun is bristling with safeties! That means you cannot decock it. Once cocked, a pellet must be fired. Also, it means that a slot had to be cut in the bottom of the outer receiver to allow for travel of the link that connects the sliding compression chamber to the cocking lever. Unfortunately, the slot looks exactly like the ones in the cheap Chinese sidelevers that were formed from stamped sheet metal stock. Nothing on the ELG is cheap, but this one feature does give that impression. 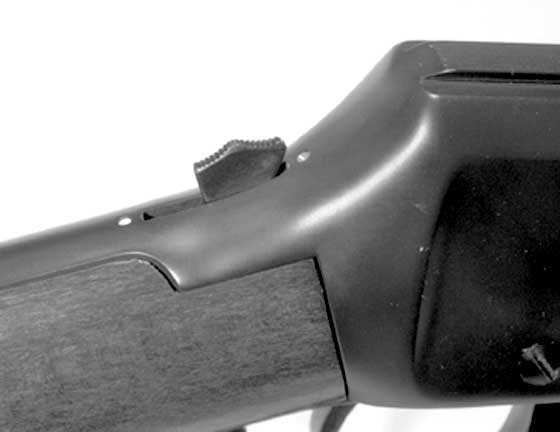 The manual safety looks a little like the hammer. All it does is block the lever from closing completely — so the gun cannot fire. 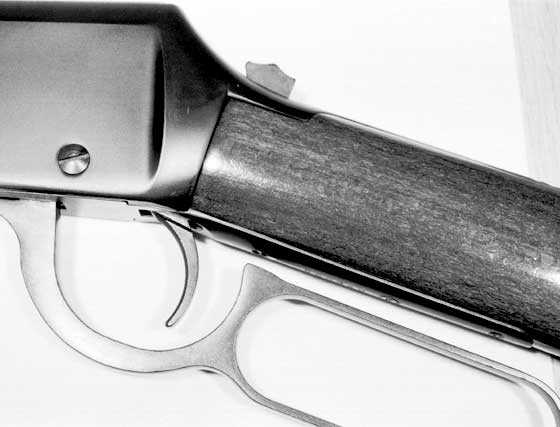 The gun is cocked and the safety is off. 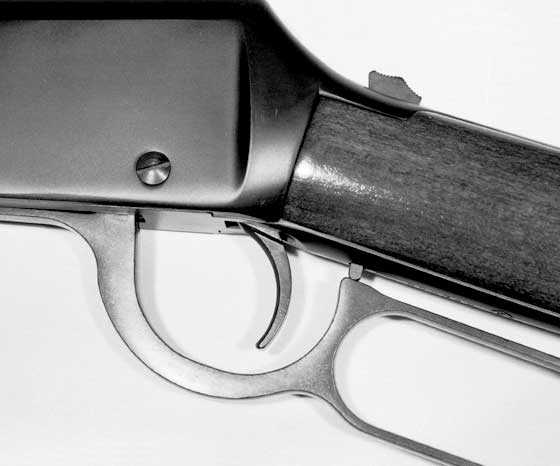 Another very neat feature of the gun is the full-length cleaning rod that’s stored in the “magazine” tube under the barrel. Simply unscrew the cap of the tube, located under the muzzle, and the rod can be dumped out. A cloth mop for the end of the rod serves to wedge it inside the tube without rattling. Of course, there’s no need to clean the bore of the gun for any reason, but it is a nice touch just the same.

The iron sights are simple but effective. The rear is a notch with a sliding elevator, and the front is a hooded square post. It’s no problem to get on target at the ranges this gun is made for — say 5 to 25 yards. Windage adjustments are possible by drifting the rear sight in its dovetail. As we indicated, most people will probably mount a short scope or just use the sights the way they come from the factory because part of the gun’s charm is its fast handling and “plinkability.” 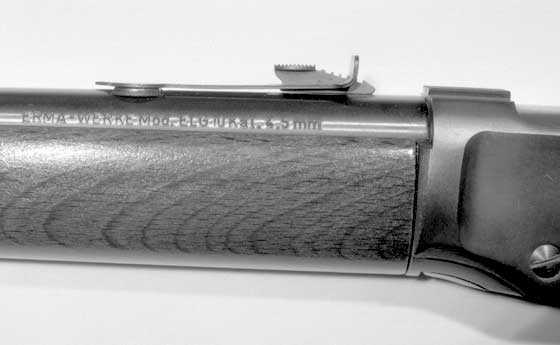 The rear sight is a simple elevator for elevation. Windage comes from drifting the sight in its dovetail.

The butt and forearm are made from beech, stained a dark red on all the guns I’ve seen. They fit as well as any firearm wood made after WWII. The buttplate is blued metal, reminiscent of Winchesters from decades ago.

Throughout this article, the word metal has been used without further explanation. The gun is not entirely made of steel. That would add at least a pound of weight, if not more, and it isn’t necessary. The receiver is made from tough aircraft-spec aluminum, while the functional parts and the barrel are made of high-grade steel. Everything is finished the same, so there is no way of telling what’s what unless you go over the whole thing with a magnet.

The Erma ELG 10 is going nowhere but up in price. Even in Europe, where more were sold, it was never a mainstream airgun. So, sitting around waiting for the market to go flat is a hopeless cause. If you want one, better get it now because it will only cost more later.

RETURN TO THE PRESENT
That article was interesting for me, as I hope it was for all of you. I want to thank Kevin for putting me onto this idea. Edith did it when I was sick, but I just never thought it could work in anything except an emergency. But since I don’t own an Erma ELG 10 any more, I guess this is as close as I will get to one, so we might as well enjoy it for what it is.

Regarding my prediction on the price continuing to rise in the future, it actually did keep increasing until around 2008. When the economy stalled, the prices for vintage airguns like this one all took a dive. Only in recent years have they shown any signs of increasing again, and I would have to say that the price is pretty well where it was in 1999 — around $550-650, depending on condition and if it has a box.

Resurrecting this old article was fun, and I think we’ll do it again as several of you have requested.