Today, we’ll have the first part of a guest blog from reader Vince. For those who don’t know him yet, Vince is our “go-to” guy for fixing all sorts of strange vintage airguns. In this post, he tells us the tale of a wild idea he just had to try.

Over to you, Vince!

“Nitro” is da bomb, right? I mean, in current usage, “Nitro” anything means hot, fast, powerful and overall bad. This normally benign element sure shows its alter-ego when combined in properly mischievous proportions with oxygen to form nitrous oxide. More fun can be had by mingling it with oxygen, carbon, and hydrogen in various arrangements to come up with nitromethane, nitroglycerin, nitrocellulose or TNT (trinitrotoluene). So, yeah, “Nitro” IS da bomb — in every sense of the word.

Now, when Crosman started producing the Nitro Piston series of air rifles — well, it sends the imagination reeling, doesn’t it? That is, at least, until we come back to reality and realize all they’re doing is using something called a gas spring, which uses pressurized nitrogen to exert pressure on a piston-rod and cylinder assembly. Push the rod in, and it pops right out again, with different degrees of enthusiasm, per the individual design of the particular gas spring.

The advantages of the gas spring in an airgun application are numerous. Because there’s no metal coil spring inside, the gun doesn’t FEEL like there’s a metal coil spring inside. No twang, sproing, buzz or anything else of that nature — and no twisting or torquing reaction as the spring extends and slightly unwinds. Because gas doesn’t fatigue, a properly functioning gas spring will never take a set or get weaker with time. This also means you can leave it cocked for as long as you want with absolutely NO effect on spring life.

What’s not to love?

Well, specifically, those two little words…”properly functioning.” Yes, the gas will never fatigue, but sometimes it leaves home and never comes back. And if the gas spring DOES leak, there’s nothing left to do except go get another one. And almost certainly, it means going back to the manufacturer — and praying that they still have them available.

You see, gas springs are something of a specialty item. They kinda have to be designed around a specific application. There are universal gas springs out there, but the chances of finding one with parameters comparable to your airgun is gonna be difficult. Unlike a coil spring you can’t just get a longer one and cut it to length. You can’t tell what sort of rate a gas spring has (or had) just by measuring things, like you can with a coil spring. I believe you can still get custom coil springs made on a case-by-case basis, but making a gas spring is a bit more involved. Heck, you can make a crude coil spring yourself using a paper clip and a pencil. Sure, it won’t be good for much — but it shows that the basic process for making one is, well, pretty basic.

That’s why I’m not terribly tempted by all these Nitro Piston (of any sort) air rifles that are out there. Will you be able to get it working 50 or 75 years from now? I certainly won’t, cause I’ll probably be gone by then. But that’s beside the point. I’ve got future generations in mind here! I don’t want little Billie- or Betsy-Bob cussin’ out their great granddaddy simply because he bought a gas spring rifle they can’t fix. Heaven knows they’ll probably have enough reason to do that anyway. Why add fuel to the fire?

That’s when I got to thinking. How about gas-springing a spring gun? When the gas stuff craps out, I (or whoever) will easily be able to cram in all the old conventional spring stuff and the gun will be back in business. After examining the Crosman gas guns (for some reason this makes me think of the “fart gun” from Despicable Me), it seemed obvious that they’re based on the ubiquitous Quest platform. That rifle, as we all know (except for those of us who don’t) goes back to the old BAM B18/B19 air rifle. Which, in turn, was a near-clone of the old steel-barreled Gamo series of the time (Shadow, 220, 440, 890, etc.).

Seems to me that a proper pickin’ of replacement parts ought to let ANYONE with a Quest variant (which are as numerous as the stars in the sky) or a Gamo 220 variant to gas ’em up without giving up long-term serviceability. The best part is that Crosman is generally the most tinkerer-friendly airgun company out there. Not only do they sell parts — ALL parts — for many of their springers, but they’ll sell them to anyone. And they’ll let you keep your first-born, your arms and your legs, and your very soul because their prices are so reasonable.

So it is that I started combing through the parts list for the Storm and the Titan GP air rifles. My suspicion of the close relations was confirmed by Crosman’s designations for these guns — both start with C1K77. I believe C designates the gun family, the 1K means 1000fps, and the 77 points to .177 cal. In any event, the commonality of parts (especially the cocking link, trigger assembly and piston seal) tells me I’m on the right track. Things can get a little tricky, as some parts that are virtually identical might have different part numbers depending on cosmetic details (like lettering). Trusting my own judgment, I came up with a list of 5 parts that I THINK will fill the bill:

I ordered the parts and waited. As a side note, I told the customer service rep at Crosman what I was trying to do, and he seemed rather interested in my results. I think I’m gonna just send him a link to this blog. As another side note, there’s some commonality between Crosman’s part numbers (which were revamped a couple of years ago) and Stoeger’s. Of course, both guns are made by BAM in China.

A week or so later, the package arrived! 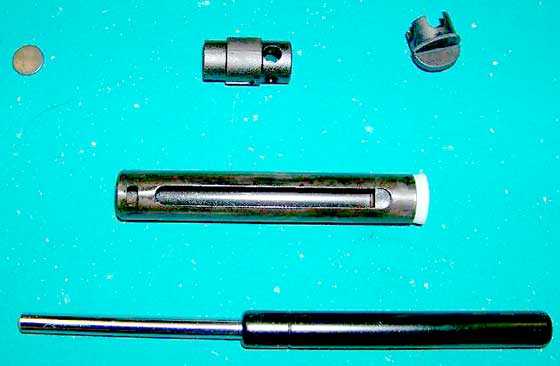 The parts received from Crosman. The camera perspective distorts the gas spring at the hottom. It’s really straight.

Picking a guinea pig is easy. I immediately turn to a tried-and-true, long-time member of my collection: a Gamo 220.

The Gamo 220 is a bit of a mule, frankly. All the 1000 fps Gamos of that period used essentially the same powerplant with a 25mm bore, a 100mm stroke, and the same 29 lbs./in. spring. The Shadow, which was the first decent airgun I ever bought, had a nice-to-hold, if utilitarian, synthetic stock and the low-grade rear sight. The significantly more expensive 440 had a nice-looking wood stock with Gamo’s “better” micro-metric rear sight (which, incidentally, is actually inferior to the lower grade one). The upscale 890 was a sightless 440 that came with a scope.

The 220, price-wise, sat in the middle — with a completely unadorned, mud-brown and slippery wood stock with about as much aesthetic appeal as an old shoe. It lacks the utilitarian friendliness of the Shadow and the visual appeal of the 440/890. It really was the least-appealing of the Gamo magnum breakbarrel lineup. Why do I have one?

As a result, it periodically becomes a test-bed for projects when I don’t want to mar up a NICE gun. Projects like this one.

The first thing I do is baseline the rifle for accuracy and power. In the accuracy department, it didn’t disappoint — a 0.30-inch 5-shot group at 36 feet. That’s about what I remember for the gun. Power-wise, however, was a different kettle of fish. I used RWS Basic pellets for velocity and averaged only 814 fps with a spread of 22 fps. The spread isn’t too bad, but the velocity stinks and represents a measly 10 ft-lbs of power. Oh, well. Frankly, I don’t even remember what guts are in this thing.

The gun comes apart in pretty much standard Gamo/Quest fashion, starting with the three stock-to-action screws. Once the action is out of the stock, you go to the rear of the spring tube, where the big bolt comes out first. 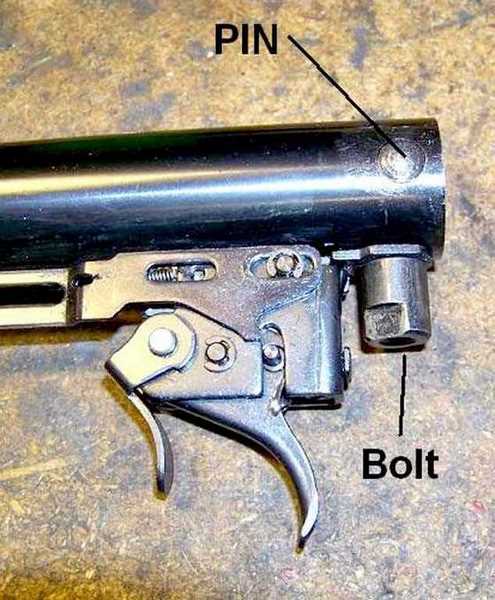 The big bolt comes out first. Then, the pin is drifted out, but only after the end cap is restrained.

The pin is next, but the rear retainer has to be suitably restrained in order to contain the approximately 2 inches and 60 lbs. of mainspring preload typical for these Gamo’s. Or not, as the preload in this gun turned out to be less than an inch. What happened? We’ll find out soon enough.

Next step is removing the trigger, which means the barrel has to be broken open so the trigger can slide backwards a bit.

Break the barrel to put slack in the cocking linkage. The slotted bar that runs back to the trigger is the link for the anti-beartrap device.

Then, the cocking link gets pulled down, freeing it from the piston and allowing you to disengage the anti-beartrap link. 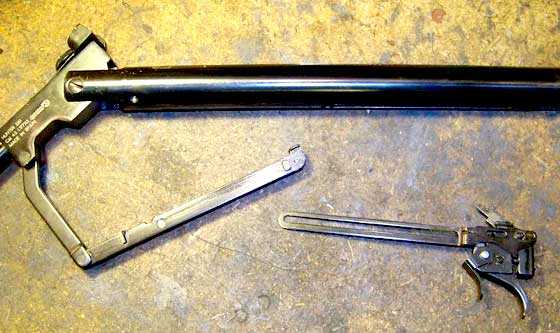 At this point, the piston just slides out. So — what’s up with that low power and lack of preload?

Wow! That mainspring sure is short. And that rear guide AIN’T Gamo.

Oh, yeah — that’s right. I detuned this thing with a Crosman 500X spring. Incidentally, that spring is part #B12-1-00-4A, for anyone who wants a real pleasant detune on a similar Gamo or a Quest variant. That’s why velocity was so low and why I could cock it with my pinkie! That also explains the lack of preload.

But the guide? Near as I can tell, it was a custom guide I picked up somewhere. It’s dimensionally close enough to the normal Gamo parts that I can be sure it isn’t affecting power. 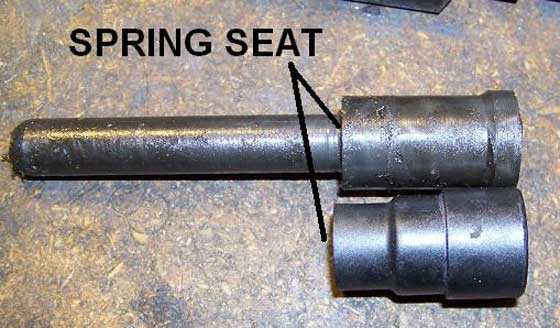 As a matter of curiosity, I looked at the two pistons side-by-side.

The new piston that goes with the gas spring (bottom) has a slightly shorter stroke than the old piston.

The upper one is the original — and it’s a little shorter, but it appears that, for whatever reason, the gas spring wants a slightly shorter stroke than the coil spring. Also — although it’s hard to tell from the pictures — the inside of the old piston has a flat surface for the top hat, while the newer one has a shallow hole meant to locate the rod end of the gas spring. You will see why this is needed in the next installment.

That’s where we are going to leave this story for now. Vince has the old parts out, and the new parts ready to install. We’ll see what happened in the next installment.