Today I’ll tell you the rest of the story. And, what a story it is! I had no plans for this part of the BSA Meteor report to go as long as it did. Circumstances just led me to this point. All I did was faithfully chronicle what happened.

When we left the Meteor yesterday, I’d removed the piston body, but the piston head was still stuck inside the spring tube in the forward part we call the compression chamber. The best access is through the air transfer port — a hole 0.125 inches in diameter. I had a pin punch that fit the hole, and I hoped it would need only a couple taps to come loose, but it was far tighter than I’d thought. The pin punch went in as far as it would go (about 1.5 inches), and the head was still out of reach from the other end. I needed a longer punch. 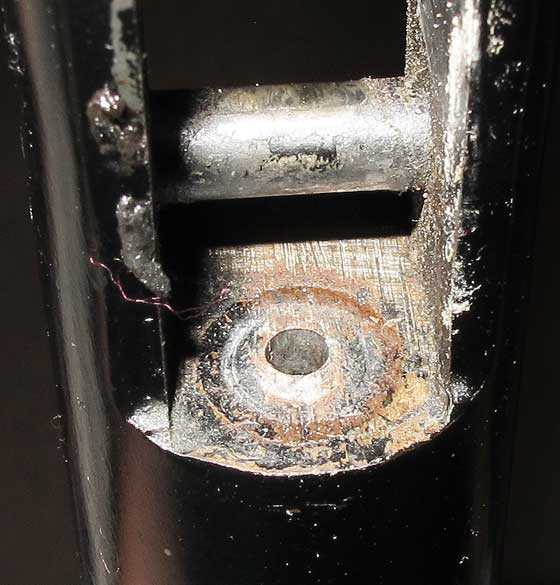 The air transfer port provided the best way to get to the stuck piston head. With the barrel removed, it was easy to insert a pin punch through the hole and tap the piston head out of the compression chamber.

I flipped the spring tube straight up, with the transfer port on the lower end, and poured Kroil (penetrating oil) on it to loosen the head. This is similar to freeing a stuck piston in an old tractor, except that this is smaller and a lot easier to work on. I left the Kroil in the spring tube overnight; and by the next morning, none had passed the piston head. The piston was stuck tight!

My shooting partner, Otho, made me a 12-inch pin punch from music wire that was exactly 0.125 inches in diameter. I met him out at the rifle range, where he gave me the new punch. All it took was a couple taps with a ball peen hammer and the head came right out. The Kroil on the walls of the spring tube made removal that much easier once the head got to the place where the oil covered the walls.

What came out of the gun was surprising, as it didn’t look like a Meteor piston head was supposed to look. But it did appear to be factory-made. Experience has taught me to, “Make haste slowly,” as Benjamin Franklin once said, so I studied the piston head and thought about the project for a day.

Looking on the internet, I found one other person who had the same problem — the head separating from the piston. And his gun was filthy dirty inside, just like this one. When he described his piston head, it turned out to be exactly like the one in my gun and also is not a head that’s normally seen in a Meteor. Then a happy thing happened.

New blog reader Dag Evert told me my rifle looks like a blend of different Marks to him. He sees some Mark IV and some Mark V characteristics in my gun, and he told me that he has seen 3 different piston heads in these rifles. For some reason, the guy on the internet thought someone had substituted a BSA Scorpion piston head in his rifle.

The piston head of a normal Mark IV Meteor has a large o-ring near the front of the head that is backed by a buffer washer. The head is either keyed to a slot in the end of the piston or there’s the newer (cheaper) kind of piston head that’s held on the piston by an E-type circlip. That kind can separate from the piston just like mine did.

My piston head appeared to have leather around the sides. I had to destroy the leather material to find out if I’m right about the composition, but I also don’t care for the weak way this head attaches to the piston. According to what I’ve read, it’s actually very weak! I would like to replace it with a new piston that uses a more conventional head that won’t separate from the piston while inside the gun. 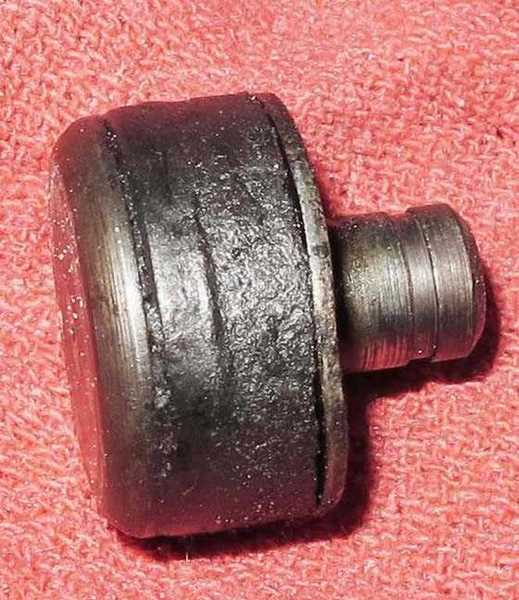 This is what the Meteor piston head looked like when it came from the rifle. This is an enlarged and enhanced photo, so you can see the separation of the o-ring and buffer washer; but when looked at in normal light at normal size, this head looked like the sides were all leather. The shallow groove in the end of the head is for the E-type circlip that holds it fast to the piston. 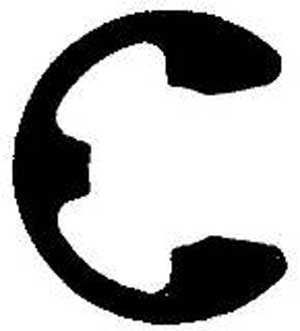 This is an E-type circlip that’s used to hold the piston head to the Meteor piston.

John Knibbs in the UK has an entire rebuilt piston with a new head that’s ready to go, but the price is 45 British pounds, which is about $72.00. Add shipping to that, and it comes out to around $80 — which is more than the rifle cost. Of course, I have to either fix the rifle or sell it for parts, and I do want to fix it. So, I’m going to have to spend some money. I don’t want to make parts for this gun if I can get around it…because most of our readers can’t make parts, either.

John Knibbs sells this BSA Meteor piston assembly complete with new piston head. This is everything needed to fix my rifle, but the cost is high.

I kept searching for something that was less expensive. I had a perfectly good piston, so all I needed was a new piston head. Instead of being attached with a circlip, as mine is, I wanted one that had a more positive attachment so it wouldn’t separate again.

At this point, I wasn’t entirely sure that the head in my gun was the same as what was being offered on the internet. It was time to take my piston head apart, and that probably meant destroying the soft parts. But since this head wasn’t going back in the rifle again, I saw it as no loss.

The first step was to remove the rear washer behind the buffer material. It should have been free to come off, and it was. 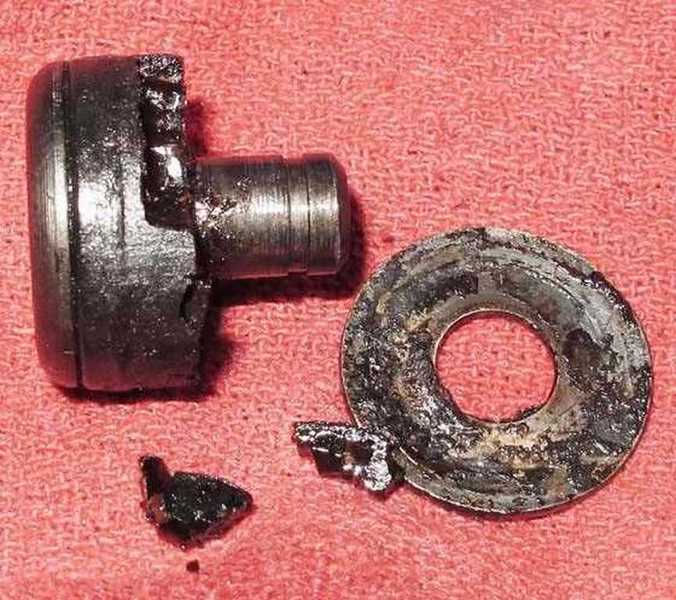 Whatever material the buffer washer was made of, it was completely gone by this time. The simple act of pulling off the metal washer behind it caused the washer to begin to disintegrate. It wasn’t the leather I thought it was.

The o-ring was so flattened by years of compression inside the chamber that it looked like something else. I cut it off to show that it is really a conventional o-ring. 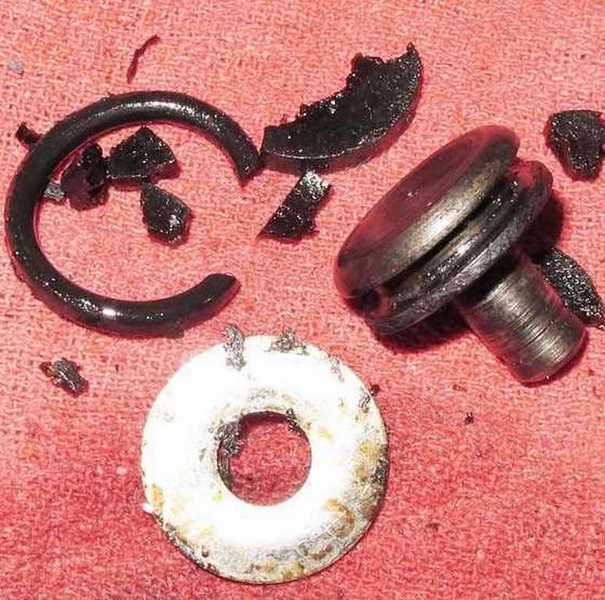 With the o-ring cut off, you can see that this piston head is the usual one found on a Meteor. But the method of attachment to the piston by a single circlip is far too weak for reliable operation.

What I needed was a piston head with all the parts that attached to the piston with something more positive than just a circlip. And with more searching on the internet I found what I needed. On T.R. Robb’s website, I found an adjustable piston head for BSA Meteors that comes with the buffer washer, 2 o-rings and a nut to fasten the head to the piston. 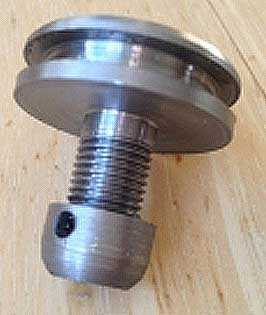 This adjustable piston head comes with everything needed to fix my Meteor piston. Note how the fastening nut is tightened by a rod inserted from the side. The soft parts are included with this item.

Best of all, the cost for this piston head shipped to the U.S. is just 17.25 British pounds, which is only $27.51. That’s affordable in my book. I ordered one, and hopefully it’s on it’s way.

The fact that such a piston head exists tells me that others have had this same problem. That, by itself, is reassuring to know.

Last word
Before I end today’s report I want to draw your attention to the old piston head once more. Notice that the top of the head is bare metal. That’s the part that rests against the end of the compression chamber. But it doesn’t slam against it — or at least it’s not supposed to. If it did, it would hammer the gun apart in a relatively short time.

No, the compressed air in front of the piston head cushions the head from striking the top of the compression chamber when the gun is working right. Hopefully, all that’s needed to get this rifle working right again is a new piston head with fresh seals and some cleaning and lubrication of the gun’s other parts. 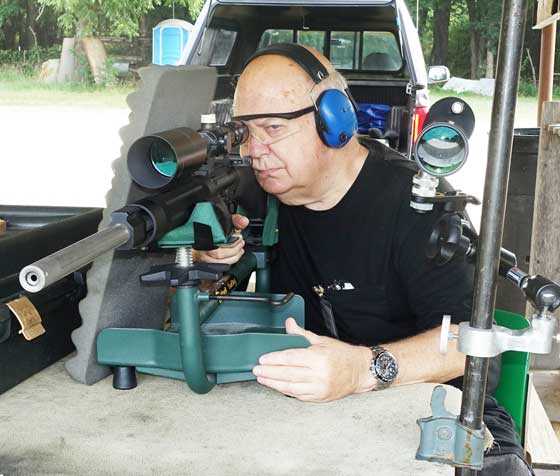