Today is a special test of the C96, requested by blog reader RidgeRunner and seconded by several others. You want to see if the pistol will be more accurate with Daisy’s Avanti Precision Ground Shot, which is made expressly for the Avanti Champion 499 BB gun. More accurate than what? More accurate than the best BB tested in Part 3, which turned out to be the Daisy Premium Grade zinc-plated BBs that shot the tightest groups with this pistol?

Velocity first
We know that the Daisy Premium Grade BB averaged 395 f.p.s. with a total velocity spread of 18 f.p.s. (from 386 f.p.s. to 404 f.p.s.). RidgeRunner suspected the Precision Ground Shot would be faster in this pistol because it’s usually slightly larger and also more uniform. So, I first shot it over the chronograph.

On to the accuracy test
I offered to do a blind test, but RidgeRunner trusted me to try my hardest with each BB: and that’s good because there’s a definite difference in appearance between the Premium Grade BBs and the Precision Ground Shot. The latter are not as shiny and appear more silver than steel in color than the Premium Grade BBs. I would have known which BB I was shooting.

The distance was the same 5 meters that was used for the first test, and I used the back of a chair to steady my hands as I held the pistol, just like I did before. This resulted in a very stable hold for every shot.

Daisy Premium Grade BBs
I shot 2 groups of 10 with each BB. The first group of Daisy Premium Grade BBs measured 1.115 inches between centers. Two BBs landed outside the black bull. The second group measured 0.644 inches between centers. That’s almost half the size of the first group, so you can see how much latittude there is with BBs — even at 5 meters. 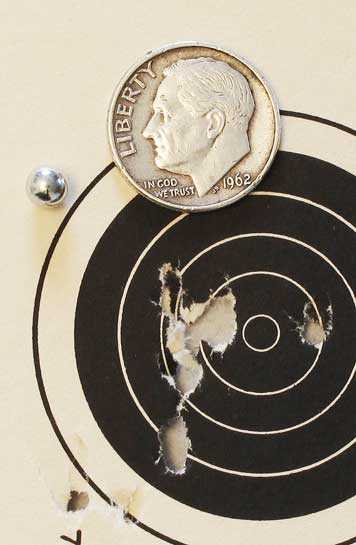 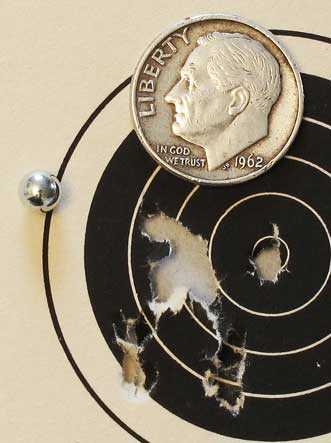 These 10 Daisy Premium Grade BBs went into a tight 0.644-inch group at 5 meters. This is the second-best group in this series.

Avanti Precision Ground Shot
Now, it’s time to test the Avanti Precision Ground Shot. This shot is ground to work best in the 499 BB gun, only. But you readers wondered if it would also be more accurate in the C96 BB pistol. To test that theory, I shot another 2 groups of 10 shots each at the same 5 meters. The first group measured 0.954 inches between centers. One BB was outside the black, and 2 more were right on the edge.

The second group I shot with this ammunition measured 0.556 inches between centers. It’s the smallest group of this session and would seem to lend credence to the Precision Ground Shot being more accurate than the Daisy Premium Grade BBs. However, the difference in group sizes of the 2 different BBs is not so great as to be overwhelming. Yes, both groups with Precision Ground Shot are tighter than the corresponding 2 groups made with the Daisy Premium Grade BBs, but the differences are not large. I don’t think they justify shooting the Precision Ground Shot in the pistol since they cost roughly 2.5 times more. 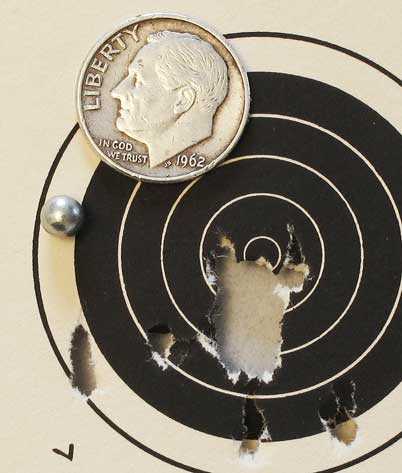 These 10 Daisy Avanti Precision Ground Shot went into a 0.954-inch group at 5 meters. 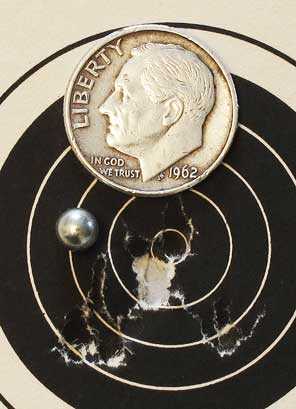 These 10 Avanti Precision Ground Shot went into an ultra-tight 0.556-inch group at 5 meters. This is the best group in this series.

Conclusions
The Avanti shot went slower than the Daisy Premium Grade BBs and also varied more. However, the difference wasn’t much in either category.

The Avanti shot also appears to be slightly more accurate than the Daisy Premium Grade BBs. Again, the difference is very small, but it is there.

I’m surprised by these results. I predicted the Avanti shot would be faster because of its slightly larger size, but that it wouldn’t be any more accurate. So, I was wrong on both counts. I don’t think the difference between the two types of ammunition weighs in favor of using the Avanti shot in this gun, but it’s really a call the owner of the gun needs to make.

My thanks to RidgeRunner and others who asked for this test. 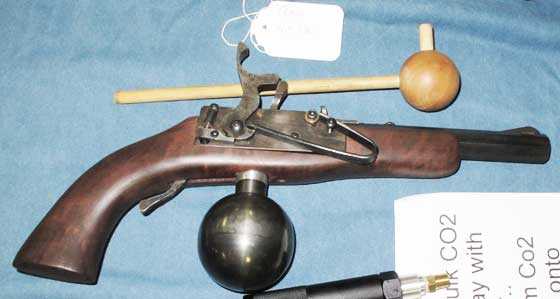