This is the first test of the See All Open Sight. I chose the Crosman M4 –177 as the first rifle to be tested because the See All comes only with a Weaver base, and the M4-177 has a Picatinny rail that will accommodate it. The choice was based solely on that and little else, except the M4 had been shown to be fairly accurate at 10 meters.

For the test, I decided to fire a 10-shot group using the factory sights, which are a peep in the rear and a post up front. Since the rifle was stored in the box without its sights, they had to be mounted and sighted-in. I started with Crosman Premier Super Match wadcutter pellets but switched to 7.9-grain Crosman Premier lites after seeing the size of the Super Match group.

I was shooting from a sandbag rest at 10 meters. Five pump strokes were used for every shot in this test. The group of 10 Premier lites measured 0.84 inches, so that’s what I’ll use to compare the results from the See All sight. 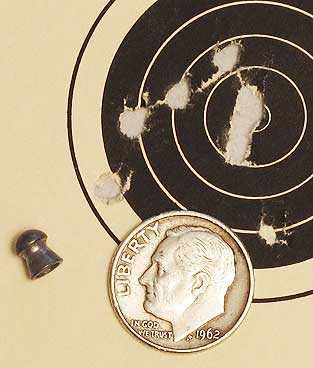 Ten Crosman Premiers went into 0.84 inches at 10 meters when the factory sights were used.

Mounting the See All Open Sight
The sight went on the flattop receiver easily enough, and the 2 screws that hold it in position work well. But after I mounted the sight, I discovered that it was impossible to get my head low enough on the stock to see the reticle. All I could see was the See All name that’s beneath the triangle. The sight needed to be adjusted up.

Sighting-in
I adjusted the sight up as far as it would go and got the reticle up to where I could just barely see it if I held my head artificially low on the stock. To sight the rifle on the target, I had to tilt my head far to the right to get my eye low enough to see the full reticle. I used a 6 o’clock hold on the bull for all my shooting with this sight, which is the only way to be precise with a sight that covers the bull.

With this sight picture, I missed the entire paper at 10 meters. So, I walked up to within 10 feet of the target and aimed again. This time the pellet struck the target backer board about 6 inches below the aim point. Something had to be done, and done quick!

I had positioned the See All sight as far forward on the receiver rail as space permitted, so now I moved it back as far as it would go, like the position of a peep sight. This made sighting easier, though I was still tilting my head way over to the right to see the reticle.

With the sight in this position, I put a Shoot-N-C bull at the top of a blank sheet of target paper and shot 4 shots at it from 10 meters. They landed about 7.5 inches low on the paper, as you can see in the photo. 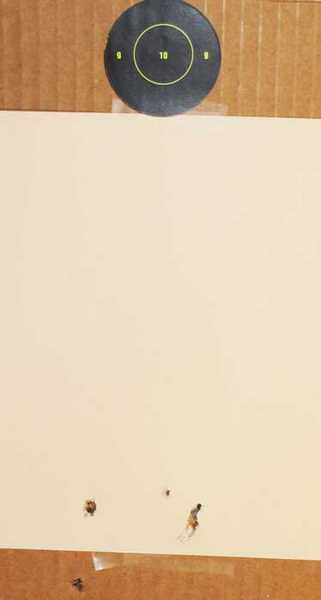 Four Crosman Premiers went about 7.5 inches low at 10 meters. The aim point was the bottom of the bull at the top of the backer board.

This wasn’t working! And the reason it wasn’t is the straight line of the M4-style rifle. The flattop receiver doesn’t permit mounting the See All Open Sight high enough to be seen easily. It’s not the sight’s fault — it’s the rifle’s.

I was ready to call it a day when Edith suggested that I mount the sight to the Picatinny rail where the rifle’s front sight is supposed to go. It was simple enough to move the sight, so I tried it and found I could see the reticle much easier. A test shot showed that it was hitting the target way too low, however. Because the sight had been moved from the rear to the front, the adjustments had to be reversed to work. 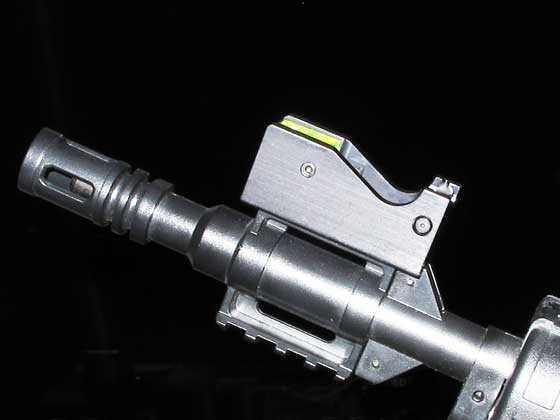 Thanks to Edith, the See All Open Sight was mounted to the front sight base, and the reticle became easier to see.

You move a front sight in the opposite direction you want the strike of the round to go, so  now I had to adjust the sight as low as it would go, to bring the point of impact up as high on the target as possible. The See All sight doesn’t have much adjustment up and down — only 45 minutes of angle. When it was down as far as it would go, the pellet was still hitting the target about 2 inches below the aim point, but that was a lot better than it had been before. So, kudos to Edith for this suggestion that kept the test running!

I shot 2 groups with the sight in this position. The first one isn’t very good, as I had half the aim point covered by the target paper, and the tip of the triangle was on the center of the bull rather than at 6 o’clock. But I still got a group that is good horizontally. It’s just spread out too much vertically. 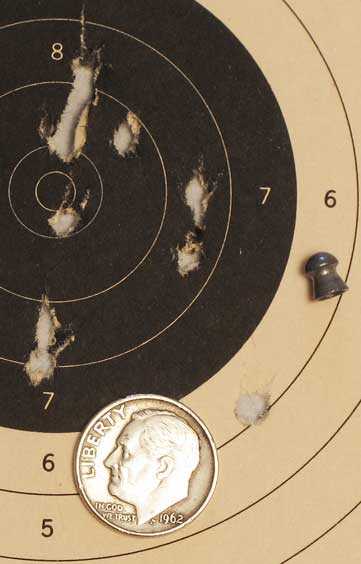 This 10-shot group is tall, at 1.803 inches between centers, but not that wide. The aim point was an estimate of where the center of the top bull was located because the target paper covered half of it.

When I mounted the second target, I fixed the situation. The second group was shot with a 6 o’clock hold on the top bull. The aim point was much more precise in this case, and the group shows it. Although the overall group is the same 1.803 inches as the first group, 9 of the holes are in 1.125 inches. Like the first group, this one is also strung out vertically. 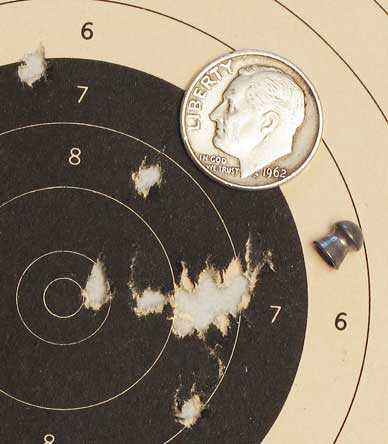 This 10-shot group is identical in size to the first one (1.803 inches), but 9 of the shots are grouped much better at 1.125 inches. Notice that 6 shots went into a single hole!

What’s wrong?
It seems that the See All sight isn’t made for a rifle with a straight stock line like the M4’s. The eye is too high relative to where the line of sight is. This can be seen when the factory sight is mounted next to the See All. 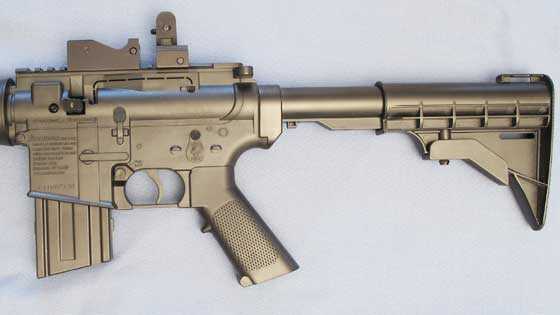 I mounted the factory peep sight and the See All Open Sight together on the flattop rail. 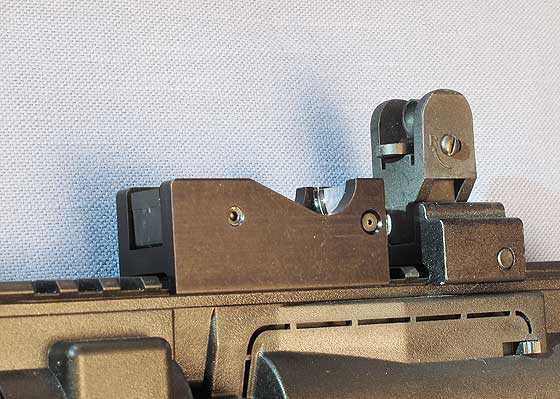 This photo shows how much higher the factory sight line is than the sight line of the See All sight.

Conclusions
The straight lines of the M4 rifle are all wrong for use with the See All Open sight. With a flattop receiver, it’s impossible to get the sight mounted high enough to see without holding your head at an odd angle. So, this test was inconclusive. All it proves is that the wrong rifle was used. However, this should serve as a warning to those who might think of using the sight on their other M4-type rifles. Unless you put a high adapter under the sight to raise it up, it won’t work.

The vertical adjustment range of the See All sight is not large enough for an air rifle whose barrel is slanted downward, as so many of them are. It’ll be necessary to mount the sight on some kind of compensating base for the next test. I’ve selected a TX200 Mark II as the next test rifle, and we’ve already done a test of this rifle with a red dot sight. I have a drooper base that Leapers made when we developed the UTG drooper bases for RWS Diana rifles, and this one has no recoil shock shoulder; so, it’ll go right on the TX200 without a problem.

I’m encouraged by how easy it was to acquire the sight picture once the See All was mounted in the right position. It was much faster than a peep sight picture; and even though the overall group made with the sight is larger than the group made with the peep sight, I see that many of the pellets went to the same place. That gives me confidence that the See All Open Sight will work well when mounted on the right rifle.

I also see a bright future for this sight on pistols. The farther away from the eye the sight is, the easier it is to see the reticle. Holding it an arm’s length from the eye is no problem. I’ve already confirmed that the Leapers base fits my Beeman P1, so a test of that pistol is in the works, as well.