Home > Blog > Flashlights and Optics > Why does the point of impact shift from one side to the other?

Why does the point of impact shift from one side to the other?

This report is for blog reader Roger, who has this problem, and also for RifledDNA, who says he has it, too. Fred DPRoNJ (Democratik Peoples Republik of New Jersey), also expressed interest in the topic. I suspect that hundreds of our readers, if not thousands, are curious. Why would a scope that shoots to the left of the aim point at 10 meters be dead-on at 20 meters and off to the right at 35 meters?

Roger doesn’t state the problem in quite the same way that I do, but it’s the same problem. Gun’s POI changes as the distance changes.

Alignment
The answer is in the alignment of the scope with the gun’s bore. But before I get to that, I want to address an answer that someone else on the blog gave to Roger. Someone guessed that his problem was caused by spiraling pellets. Pellets sometimes fly on a spiral path as they travel downrange. I wrote about it in this report: Do pellets spiral?

Don’t blame scope shift
Too many airgunners are willing to blame problems like this on their scopes. They call it scope shift. Real scope shift is rare, though not unknown. If you want to learn more about it, read my article about scope shift.

But if they’re not aligned, the shots will be off to one side when they’re closer than the sight-in distance and to the other side when they’re farther away. The drawing below illustrates what this looks like, although I’ve exaggerated the offset so you can see it. In reality, both the scope and barrel may appear to be perfectly aligned. 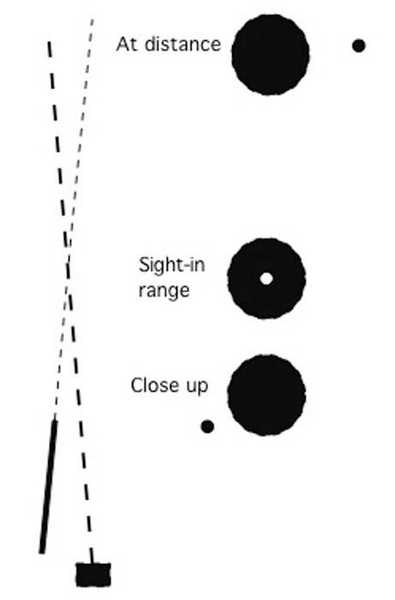 The axis of the scope (at the bottom on the right) and barrel are offset in this drawing, but the scope can be adjusted so they coincide at one distance. Any closer or farther away than the sight-in distance, though, and the pellet will move to one side of the other. This drawing is grossly exaggerated to highlight the problem in a short space.

How to correct it
To correct this problem, the scope must be positioned on the rifle so its axis is parallel to the axis of the bore. This may be easier than it sounds. If you have 2-piece scope mounts, for example, you can turn each of them around backward (one at a time, of course) to see if that corrects the situation. It often does. You can also swap the front ring for the rear ring for further improvement. There are 4 different possible combinations of scope ring positions with 2-piece mounts (scope rings). If you have 1-piece mounts, all you can do is turn them around backward. That’s why I prefer 2-piece mounts over 1-piece mounts in most situations.

If changing rings isn’t enough to correct the problem, you can shim them. Shimming the rings for sideways correction is the same as shimming for elevation correction — you’re just moving the scope in a different direction. A word of caution — when you shim the rings for sideways adjustment, be careful not to extend the shim too low on the ring; because if it gets under the scope, you’ll cause an elevation problem that didn’t exist before.

Now the bad news
Sorry, but almost no scope is ever completely aligned correctly. It’s nearly impossible to do so. The target scopes use bases (and rings) that are separated by much greater length than the scopes we commonly use to minimize the effects of misalignment.

But the problem that started this report was a 7 centimeter (3 inches) shift to the right at 44 meters when the rifle is zeroed at 11 meters. That’s too much of a shift and can be corrected by the methods described in this report.

The good news
The good news is that a majority of airgunners will notice this phenomenon and may eventually learn how to deal with it. But the majority of firearms owners don’t even know it exists. They’re still in the world of “bad” scopes that they sell to buy name brand scopes that have to be trusted because they cost so much! In the end, you’re better off knowing the truth.