• The competition: Where does the Dan Wesson sit?
• You asked for this!
• Where’s it made?
• Details, details
• The big difference!
• Sight options
• Scope rail not strong!
• Reloading speed depends on loading the cartridges
• Things so far

Yes, friends, this report is about a Dan Wesson pellet revolver! It looks like a BB gun, but this one shoots lead pellets. I selected the 8-inch black gun because that’s what I prefer. There’s also a silver-colored version with a 6-inch barrel that more closely resembles the stainless steel firearm.

I’m not going to compare performances of these 3 guns because that quickly devolves into a, “Which brand do I like the most” competition. Because there are so few pellet revolvers on the market, I think it’s good to note where this one is positioned. The maker advertises a velocity of 426 f.p.s. That’s pretty zippy for a pellet pistol, and we’ll test that in the next report.

You asked for this!
Every time I review a nice BB revolver, there are always people saying they would buy one if only it shot pellets. Well, this one does, so no complaints! I also like the other 2 pellet revolvers mentioned above; and if this one turns out to work well, I think it’ll be a fine addition to the market. The S&W can put 10 shots into 1.30 to 2 inches at 10 meters in my hands. It’s been 2 years since I tested one of those, and here’s a link to that report.

Where’s it made?
The CO2 revolver is distributed by Action Sport Games and made in Taiwan, where it appears to have been converted from an airsoft gun. While the manual is clean and larger than a typical Asian airsoft manual, the illustrations are still very characteristic of airsoft manuals. The instructions are written clearly, though you can tell they’re translated because of things, such as the rear sight notch being called the “aiming hole.”

Airsoft manufacturers are making inroads into the conventional airgun market. That’s a good thing because airsoft guns generally have a lot of realism. Since they’ve been mimicking firearms for decades, these guns follow the lines of the firearms they copy more closely than many airguns. And airsoft manufacturers know the importance of all-metal frames and exteriors. They don’t try to get by with plastic parts when the guns get up into the price range that this one sells for. This one has all metal parts on the outside and weighs 36 oz. — lighter than the Dan Wesson model 715 revolver it resembles, but still heavy enough to hang well in your hand.

Details, details
This is a double-action revolver with an 8-inch rifled steel barrel. It can also be cocked and fired single-action if desired. The finish is a black that resembles the black oxide found on steel guns these days, though this metal is non-ferrous. A magnet informs me that many of the action parts are made from steel, but the outside of the gun is non-ferrous metal.

The grip angle is steeper than either a Colt or Smith & Wesson revolver. Some (like me) will like it, while others may find it strangely vertical. Of course, the CO2 cartridge lives inside the grip, which is opened by pulling back on the grip panels. The panels resemble the soft material used on firearm revolvers to counter recoil; but since there’s none with a CO2 gun, they’re hard plastic. I found the grip panel (it’s really a single piece) comes off easily if you don’t pinch it while pulling back. 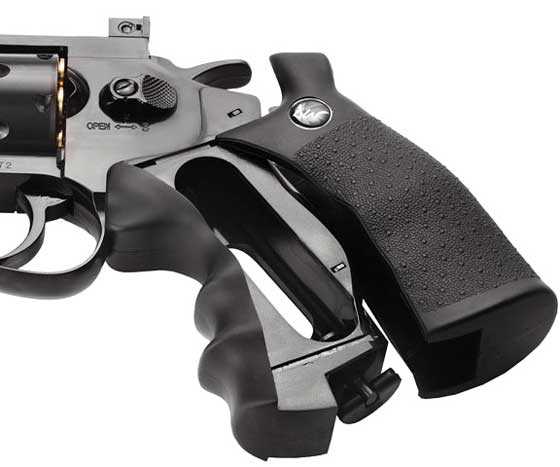 The grip shell is pulled straight back to open the gun for installing a CO2 cartridge. The shell is hinged at the top and doesn’t come completely off the frame. This photo also shows the cylinder release pushed forward to open the cylinder — and back to put the revolver on safe.

The cylinder swings to the left side of the gun, and on this gun that’s all there is to it. The pellets are held in simulated brass and plastic “cartridges” that act and handle like real firearm cartridges. They allow the gun to be loaded and emptied exactly as the firearm is loaded and emptied. 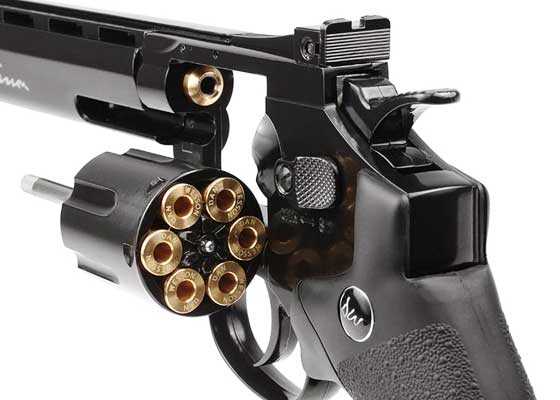 The cylinder swings out of the frame to load the gun and eject the empty shells after firing.

The big difference!
What sets this pellet revolver apart from all the rest is how it contains and shoots the pellet. There are brass cartridges that appear to be the same as .357 Magnum cartridges. Into each, a black plastic “bullet” is screwed. Only this bullet never leaves the gun. It’s really the chamber that holds the pellet, and the shell is nothing but a conduit for the gas to follow to push the pellet into the barrel. The picture tells the rest of the story. 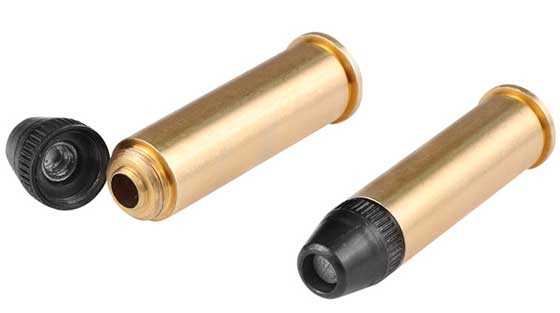 The pellet is held in the black plastic head of each shell. When the gun fires, gas rushes down the tube formed by the shell, pushing the pellet into the barrel.

The gun comes with 6 cartridges, and a set of 12 additional cartridges may be purchased for $30. If you have the gun, you’ll probably want some of these. They will make reloading the gun go faster — especially when the speedloader is used.

Sight options
The Dan Wesson comes with a crisp set of adjustable sights. The front has a white dot for rapid acquisition, but the post is square. The rear notch is fully adjustable. But, wait! There’s more!

Every pistol also comes with a Picatinny rail that can be installed in place of the rear sight, readying the gun for optical sights. Many of you will welcome this feature, which is included in the package. The gun also comes with a speedloader that handles the shells in the conventional manner and an Allen wrench to attach the scope rail. 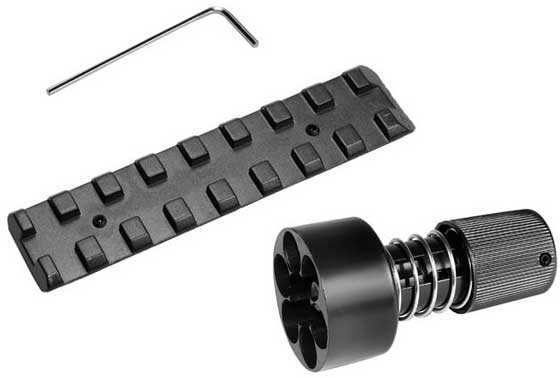 These accessories come with the gun. The Picatinny rail is installed in place of the rear sight, and the Allen wrench tightens the screws. The speedloader works the same as all speedloaders.

Sight rail not strong!
The design of the Picatinny rail didn’t seem robust to me, so just for grins I mounted it on the gun. It’s very fragile; and, in my opinion, it can’t support an optical sight of any weight. It’s held in place by a single jam screw that pushes against the top of the barrel and a thin narrow dovetail on the barrel’s top. The rear screw goes all the way through its hole and past it, supporting nothing. I won’t be testing a scope with this revolver. 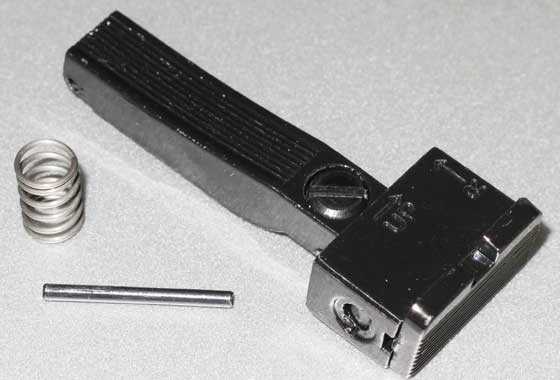 The rear sight comes off the revolver so the Picatinny rail can be attached.

The rear sight, on the other hand, is well-designed and appears to have no flaws. That’s how I’ll test the revolver’s accuracy.

Reloading speed depends on loading the cartridges
The revolver can be loaded fast once the 6 cartridges have pellets in them, but loading each cartridge takes time and is the revolver’s Achilles heel. They load in the same way that Brocock Tandem Air Cartridges (TAC) did without all the extra maintenance, and they were what killed the Brocock gun sales. It took too long to assemble and load the cartridges.

Things so far
There are some good points and some that aren’t so good. From a functionality standpoint, this revolver should work well. I can’t wait to see how it does on paper.

Dan Wesson revolver is a new addition in the world of pellet pistols.