Comparing the TX200 Mark III and the Walther LGU


This test
This will be the first official comparison test report I’ve ever written! I was opposed to comparison reports until it was recently pointed out to me that we buy electronics that way. Since I’d just purchased a new digital camera using the same method, that was hard to argue. 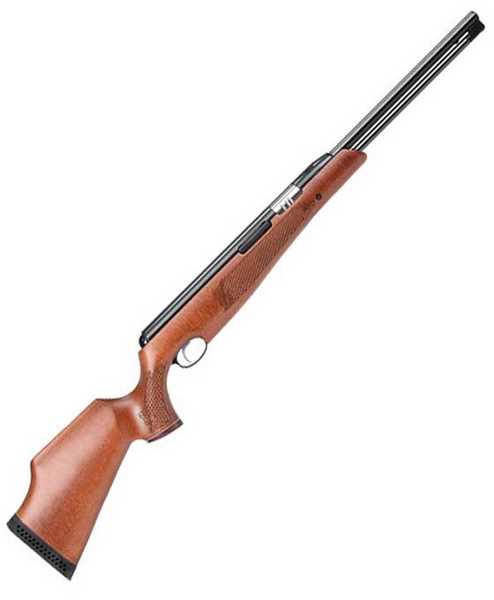 TX200 Mark II from Air Arms is the high-water mark for spring rifles. 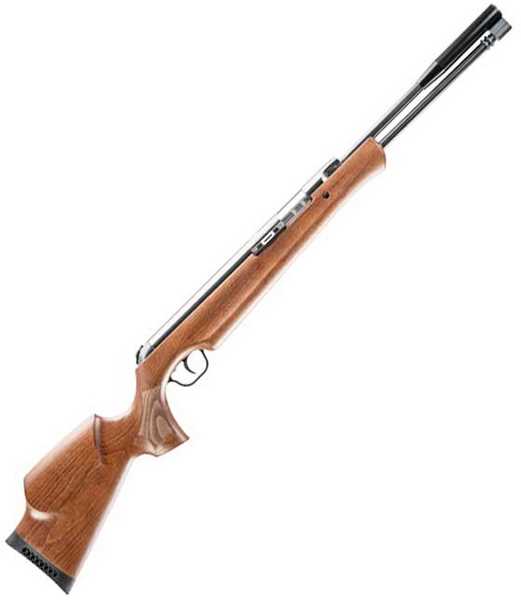 Walther’s new LGU challenges the TX200. Is it serious?

Introduction
I selected the TX200 Mark III and the Walther LGU for this comparison. These are two high-end spring-piston airguns that are similar in price, features and quality. When a buyer looks at these guns, he should not be distracted by other spring guns or even by other powerplants. He wants a good, solid underlever spring-piston air rifle, and these 2 are at the top of the list.

New buyers may be confused by these 2 rifles that appear so similar. This report attempts to show their qualities as well as any differences between the rifles, so buyers can make an informed choice.

I’ve written several reports on the TX200. It’s been around longer, and I’ve tested it many times over the past few decades.

The Walther LGU is brand new, and the 4-part report I wrote about it was thorough, but cannot compete with the volume of reports I’ve written about the TX. It showed itself capable of shooting 10-shot groups that were slightly smaller than one inch at 50 yards, which means it’s a very accurate pellet rifle. With more testing, I’m sure this rifle would produce even better results. Here are some comparative specs: 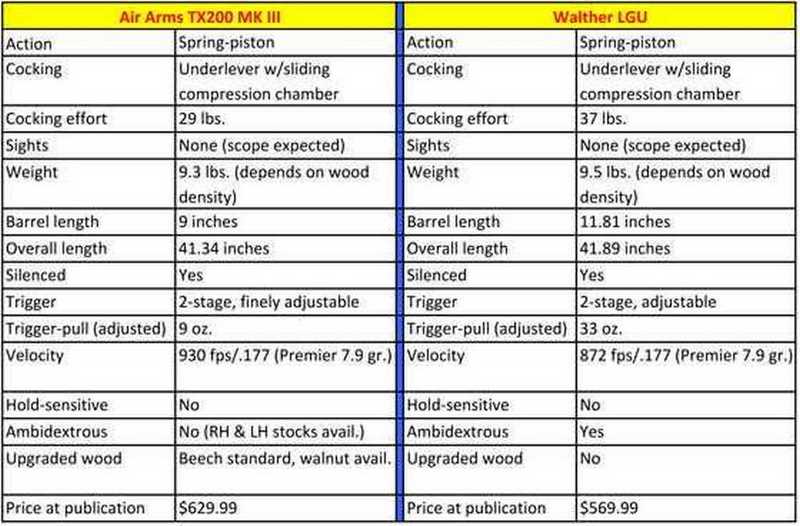 The TX200 Mark III represents the highest point in the evolution of the spring-piston air rifle. It comes from the box with nearly zero vibration in the shot cycle and only a little recoil. Cocking is butter-smooth. The initial velocity of the several rifles I’ve tested over the years has varied from 875 to 915 f.p.s., but within a few thousand shots it was over 930 f.p.s. (with Premier lites) for all of them. My personal rifle, which is over 10 years old and has over 10,000 shots on the powerplant (with no tuning of any kind), now averages 963 f.p.s. with the Crosman Premier lite.

The stock is profiled for the sport of field target, which makes this rifle ideal for hunting and shooting offhand, but also works well in a bag rest. A flat spot on the forearm just forward of the trigger is ideal for the off hand. The rifle balances with a pronounced muzzle-heaviness that competitors feel makes the gun more stable. The pistol grip is very vertical and deeply scalloped for either right- or left-handed shooters, but be sure to get the model you need, for the stock is dedicated only to one side of the body. The left-hand stock also moves the pellet-loading port to the left. All other things are the same as they are on the gun with the right-hand stock.

The rifle has baffles built into a shrouded barrel. The shooter cannot detect any sound reduction, because the sound of the powerplant is conducted through the facial bones, but bystanders can tell the TX200 Mark III is a very quiet spring rifle.

The safety comes on automatically when the rifle’s cocked, and it’s located on the left rear of the receiver, where it favors a right-handed shooter.

Some shooters feel the TX200 is heavy. It certainly is heavier than you want to carry while hunting all day unless you add a sling. The weight does add to the stability of the rifle when it’s fired, and competitors find the weight to be a plus.

The TX200 Mark III has superior accuracy. I’ve shot 10-shot groups at 50 yards that were as small as 0.658 inches between centers, though one-inch groups are by far more common.

The finish of the wood and metal are flawless. This is a rifle you will be proud to pass on to your heirs.

Walther LGU Evaluation
The Walther LGU comes to this comparison as the contender. Its rival has been around since the late 1980s, while the LGU was launched in 2014. A cursory examination of the size, weight, layout of controls and form of the stock shows the designers were well aware of who their competition was. In fact it might seem that the LGU is just a copy of the TX200. That would be incorrect. There are several differences between the rifles

The LGU has a higher comb and cheekpiece on both sides of its butt, which elevates the eye high. High scope mounts can be used easily. The trigger is adjustable, but not to the same extent as the TX trigger. So, the trigger-pull is measured in pounds rather than ounces, once adjustments have been made. The trigger does break cleanly and crisply.

The LGU has a muzzlebrake with one large chamber that does quiet the report. But like all other spring rifles, the shooter’s face touches the stock where all the powerplant noise gets transmitted through the facial bones. Others will hear a quiet report, but to the shooter it will sound loud.

There’s a buzz when the rifle fires. It isn’t annoying, but the shooter will be aware that it’s there. The recoil is very moderate.

The shape of the stock differs from the TX stock in that finger grooves are on either side of the forearm. The tip of the forearm ends in a decorative schnable. The LGU stock is also ambidextrous, with a rollover cheekpiece. The automatic safety is located on the tang — equally convenient to either hand.

Both rifles have similar power; but when I tested a brand-new gun, the LGU was a bit slower than advertised. The TX starts out around 900 f.p.s. with Premier lites and keeps increasing in velocity as it’s shot. The Walther LGU starts just under 900 f.p.s. and will probably increase with use, though my testing was not sufficient to evaluate that. In my limited testing, there seemed to be about a 30-40 f.p.s. difference between the rifles in favor of the TX200 Mark III, though this may vanish as the LGU breaks in.

At 50 yards, the LGU put 10 pellets into less than one inch. While the groups it shot weren’t as small as the best group shot with the TX200 Mark III, I didn’t shoot it as many times at that distance, either. Since this is a brand-new rifle, it hasn’t had the testing exposure that the TX has had. Figure the accuracy to be the same for both rifles.

Fit of the stock and finish of the metal is equal to that of the TX200.

Summary
These two rifles appear very similar on paper. When you shoot them, though, you find the TX200 Mark III to be the more sophisticated and refined air rifle. But the Walther LGU has good bones and should be able to be tuned to equal its rival in all areas except the trigger. Although it has an adjustable trigger, it’s not as refined as the trigger on the TX.

How to find airgun leaks & what you can do about them