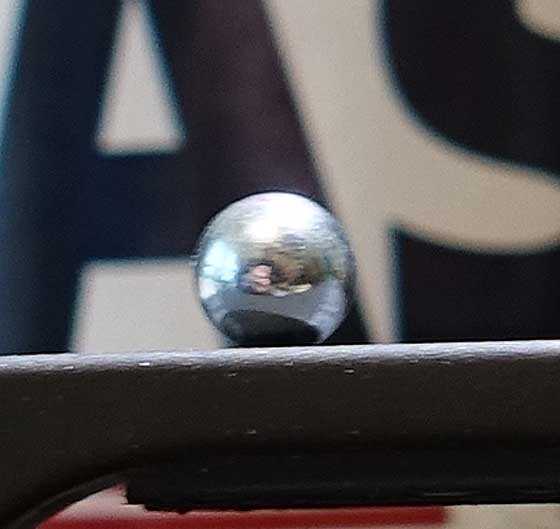 Today, we’ll look at the power and velocity of the CZ P-09 Duty from ASG. If you remember from Part 1, this blowback pistol can shoot either steel BBs or lead pellets from its 16-shot magazine. Each end of the mag has an 8-shot circular clip that rotates as the gun is fired.

Test design
I started the test shooting BBs. I shot 2 different ones in this test. The first was the Daisy Premium Grade BB that’s a standard for premium steel BBs. Because this pistol operates on CO2, which cools the gun and slows the velocity as it does, I allowed 10-15 seconds between each shot. That gives the gun’s parts a chance to warm up after the shot. I shot 8 shots per string instead of 10, because the magazine holds 8 rounds on either end.

Daisy BBs
Eight Daisy BBs averaged 317 f.p.s. The high was 330 f.p.s., and the low was 311 f.p.s. I noticed that the chambers in the circular clip grabbed the BBs with different tension, and that’s what made the biggest difference in velocity, I believe. This 5.1-grain BB produced 1.14 foot-pounds of energy at the muzzle.

The pistol is advertised to get 412 f.p.s., so I think the manufacture’s velocity estimate is a bit high — at least for the pistol I’m testing. Maybe it will speed up a bit when it breaks in.

ASG Blaster BBs
I also tried ASG Blaster steel BBs in the gun. This is a BB that’s new to me, so I also took a close look at it for you. The surface is extremely smooth. When I measured several BBs, the diameter ranged between 0.172 inches and 0.173 inches, with most of the BBs measuring 0.1725 inches. Of course, the bottle says they are 4.5mm/.177 caliber, but every BB manufacture puts that on their packaging.

These BBs did appear to be very spherical — I measured several of them at different places, and the measurements never varied. They weigh 5.1 to 5.4 grains, with most of them coming in at 5.3 grains. That is both a larger weight spread than other premium BBs I have tested, and also a couple tenths of a grain heavier. 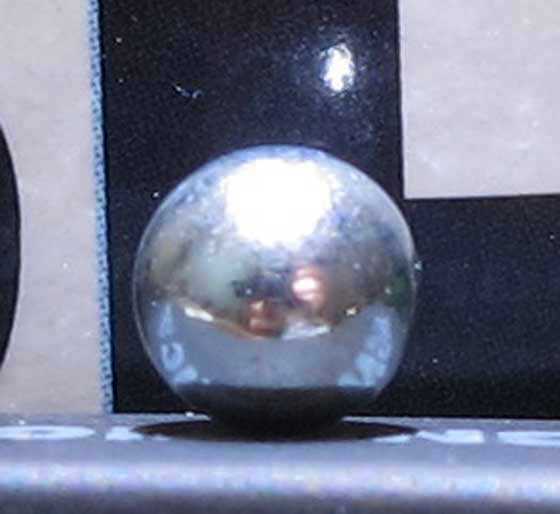 ASG BBs averaged 316 f.p.s., but the velocity ranged from a low of 303 f.p.s, to a high of 361 f.p.s. I attribute a loose chamber in the circular clip to that fast one because the next-fastest BB went just 319 f.p.s. At the average velocity, this BB produced 1.18 foot-pounds of muzzle energy.

It was time to test the gun with lead pellets. Given the power level, I selected 2 light pellets that I thought matched the gun very well.

Air Arms Falcon pellets
First to be tested were Air Arms Falcon pellets. They’re a domed lightweight pellet that often produces surprising accuracy. In the P-09, they averaged 322 f.p.s., with a velocity spread from 303 f.p.s. to 337 f.p.s. You’ll notice that’s faster than either of the steel BBs, despite the pellet’s 7.33-grain weight adding 2 grains over the ASG BBs. Obviously, these pellets fit the bore better and get more power from the expanding gas. At the average velocity, this pellet produces 1.69 foot-pounds at the muzzle.

RWS Hobby pellets
RWS Hobbys weigh just 7 grains and are quite uniform, so I use them to determine the best velocity for most .177 pellet guns. In the P-09, they averaged 335 f.p.s., but the velocity spread was pretty high. It ranged from a low of 319 f.p.s. to a high of 348 f.p.s. At the average velocity, Hobby produced 1.74 foot-pounds of muzzle energy.

Hobbys fit the chambers of the circular clips very tightly. I had to push them in with a pen to get them seated below flush. That fit may account for some of the velocity spread. The accuracy test will be interesting.

Shot count
The lower velocity means the shot count can be higher, but blowback subtracts from that. By this point in the test, there were already 38 shots on the CO2 cartridge, and the slide was still blowing back strong. That’s a good indication of when the pressure is dropping — when the slide no longer blows back.

At this point, I stopped shooting pellets because I didn’t want to jam one in the barrel, but I continued to fire the gun to see at what shot the slide would stop blowing back far enough to cock the hammer. That happened at shot 75. I would say that plinkers will get 8 full clips from the gun and target shooters should stop after 6 clips. Subtract one clip if you want to shoot rapidly without allowing the gun to recover from the cold. Of course, we still need to see if the P-09 is a worthy target air pistol.

Trigger-pull
The last thing I’ll test for you today is the trigger-pull. Double-action went off at 9 lbs., 8 oz. Single-action broke at 5 lbs., even. The length of the single-action pull is very long, and you feel a pause right at the start. But when you get to the break point, the trigger blade stops moving and the pressure builds until the gun fires.

Next, we’ll test the pistol for accuracy. I think I’ll try to test both pellets and BBs in the same report, unless something unexpected happens.