The H&N Hornet is a new pointed pellet. Is it any good? This test hopes to find out.

How do you test a new pellet? You shoot it in as many airguns as possible and compare it to what you know those guns can do.

How do I test a new pellet? Pretty much the same way, only I’m on a time schedule, plus I have to publish my findings — findings that will be scrutinized by thousands of readers for multiple purposes.

I have to be very careful when testing a new pellet, because I could give it a bad reputation without meaning to. For this reason, I’m very careful.

Well, this fact has bothered me, so I came up with what I hope will be a simple solution. I will test the pellet in a few guns of known capability and let the chips fall where they may. One of those guns is my Beerman R8 Tyrolean that I always reach for when I want to test accuracy. Today, I’ll shoot the H&N Hornet .177-caliber pointed pellet in my R8.

Or is it a pointed pellet? It certainly has a point, though not one made from the same material as the body, which is lead. Pyramyd Air calls it a pointed pellet, and I assume H&N does as well, though they didn’t put that on the tin. To my eye, however, the Hornet is a high-tech hollowpoint that has a metal point of different material attached for improved airflow. I know a way of testing that (the hollowpoint-osity), which will be in a future report.

But, today, I just wanted to get a general assessment of the pellet. Is it worth the time spent to evaluate it? And doing that is real simple. It involves a paper target and 25 yards of distance.

Before we get to the test, let’s look at the pellet. The Hornet is a .177-caliber pellet that has a pointed metal insert set into a large hollow in its nose. This insert is brass-colored. The insert metal is harder than hardened lead, and it seems homogeneous — not plated. I’m going to call it brass, although I don’t know that it is.

According to the information on the Pyramyd Air website, the Hornet weighs 8.8 grains. I weighed 10 pellets and found them to range from 9.4 to 9.6 grains. They appear well-formed and clean. But any imperfections should show up in a 25-yard test. I worry whenever a pellet isn’t homogeneous because of issues of inconsistency. But I’ll stop talking now and get on with the shooting.

The R8 was shot off a sandbag rest at 25 yards, indoors. The R8 has demonstrated it can be rested directly on a bag with no problems — which is rare for a breakbarrel.

First to be shot was an Air Arms Falcon pellet with a 4.52mm head. This is the pellet that has demonstrated great consistency in this rifle, so I use it as a benchmark.

Ten Falcons went into 0.403 inches at 25 yards. While this isn’t the smallest group this rifle has ever made at this distance, it’s still remarkable. Most shooters would be happy with 5 shots this tight at 25 yards. 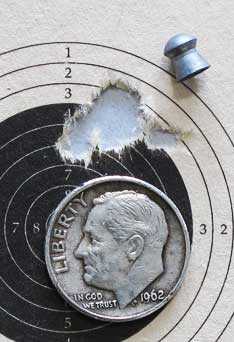 At 25 yards, 10 Air Arms Falcon pellets went into this group, which measures 0.403 inches between centers.

The Hornet’s turn. I wasn’t prepared for the long delay between firing and the sound of the pellet hitting the trap! The Falcons seemed to travel much faster, which I’m sure they did.

The Hornets entered the R8’s breech much tighter than the Falcons did, despite their heads being 4.50mm. I also measured the skirts at 4.61mm, which may be the reason they’re tight. And their greater weight also slows them.

Ten Hornets made a 0.67-inch group when shot in the same way from the same gun at the same 25 yards. Don’t try to extrapolate anything from this, other than the fact that the group is somewhat larger than the first one. But you can look at the results in The great pellet comparison test, where this same R8 shot 7 bargain pellets against the same Falcon pellet. You might find some interesting comparisons there. 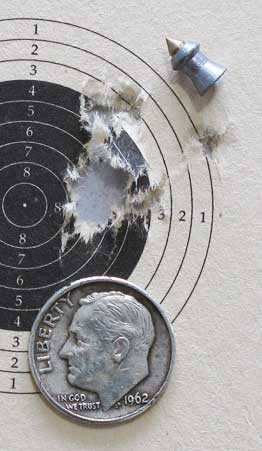 In my opinion, the Hornet has promise. I will test it next in my Diana 34P against its best pellet, which is a Crosman Premier lite. That should satisfy those who believe as I do that the R8 is not powerful enough for this pellet.

And after that, I plan on shooting the pellet into a transparent bar of glycerin soap, to assess the expansion properties. I know that’s not as cool as using ballistic gellatin, but it is far easier to obtain and manage. And it works!