We’ve closed down comments on this blog report as of May 4, 2015. When we have a chance to remove the political attack comments, we’ll open this up again for comments.

Readers suggested I test the Hornet in my TX200 Mark III. I could do that, and it would be easier than the rifle I chose to use for today’s test. But is it realistic? Most readers don’t own a TX and won’t buy one. I chose to test the pellet at high power in my Diana RWS 34P — a rifle of incredible accuracy when the correct hold is used. This is an air rifle that many more shooters around the world are likely to own.

In part 1, we saw the Hornet pellet tested in my Beeman R8 rifle. That rifle shoots the Air Arms Falcon pellet best, so that was the test standard. You can read part 1 to see everything that happened, but the bottom line is that the Hornet is only average. It was okay, but the Falcon outshot it.

Today, I’ll test the Hornet in the 34P against the pellet that it has always shot best — the Crosman Premier 7.9-grain “lite” pellet. I told you in part 1 why I’m doing this: Because I plan to test those bargain pellets in the 34P, and I wanted to get it back into shape for shooting that test. It had no scope, so I mounted one with an experimental drooper base since this rifle’s droop is severe.

It took close to 10 shots to get the shots on paper where I wanted them — not hitting the center of the bull and destroying my aim point. Once that was done, I shot the first group.

I wasn’t on my game today. In the 10-shot group, I failed to exercise a perfect artillery hold twice; and with the 34P, doing that throws the shots wild. Even so, the group I got beats about 50 percent of the good springers on the market — as well as all of the wannabes.

Ten pellets landed in a group that measures 0.696 inches between centers. But as I mentioned, 2 of those shots were made when I wasn’t holding correctly. My off hand wasn’t relaxed. Eight of the shots went into just 0.177 inches (weird, huh?), and that group represents what this rifle is capable of.

I know you’re reading this and saying, “Well, just relax your off hand every time, you fool!” It does sound that easy when I write it that way. But the truth is that it’s far more subtle than just that. This is a technique that has to be applied correctly right down to the last nuance. Those who shoot a lot understand. Those who read about shooting but actually don’t do it will wonder why I can’t get my act together.

Where I place my off hand under the forearm matters a lot with this rifle. This 34P likes the heel of my off hand to be at the beginning of the cocking slot. I actually had to correct my hold several times when I discovered my hand had slid forward by an inch. That’s all it takes to double the size of the group at 25 yards.

When you see the group you’ll see what I’m talking about:

On to the Hornet

Okay, now we know the 34P can shoot. The Hornet is next. Since we also know I’m not shooting that well today, we can also forgive a more open group with the Hornet. But the Premier Lite group does tell us what range to expect.

And, the Hornet did not do well at all. My hold was the same for every shot; but this time, 10 pellets went into 1.89 inches at 25 yards. That isn’t just a slightly larger group. It’s a horrible group. And it was shot from a gun that we know for certainty is accurate. 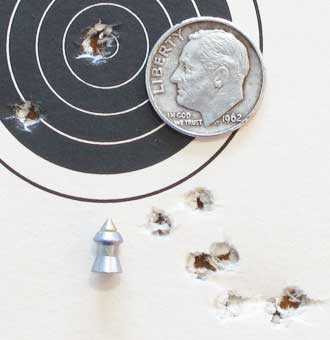 Ten Hornets went into 1.89 inches at 25 yards from the same gun that shot the first group.

Obviously, the Hornet is not the pellet for this rifle. It didn’t do as bad in the lower-powered R8 in part 1, but it did not stand up in the 34P that’s almost 3 times more powerful.

So what? Do I abandon the pellet? Or do I now try it in every other .177-caliber pellet rifle I own?

Normally, I would not test this pellet any more than what you’ve seen here. I suspected from the beginning that because it has two parts (body and point) that are put together mechanically, it might not be that accurate. Pellets that are composites of different parts (the point of the Hornet is brass) have problems getting things symmetrical from one pellet to the next. They’re almost never good.

But because we have a large number of newer readers, I’ll do one more test with this pellet. I’ll shoot it in a PCP I know to be accurate. A third test — just to be sure. I think the results will turn out the same as these first 2 tests; but as you know — I’ve been surprised before. So, stay tuned.

I want to announce the 2015 Pyramyd Air Cup. It will be held September 11-13 at the Tusco Rifle Club in New Philidelphia, Ohio. There’s plenty of time to plan to attend, so start making your plans now. I’ll be there, along with several top shooters.

Last year, attendees found the event to be a wonderful way to shoot as many different airguns as possible. Visit the web page for more information.