The Pelletgage comes in .177 caliber at the present. The holes are in a steel plate. A plastic plate above the gage plate helps guide the pellet head to the gage hole.

The last test I ran on the .177-caliber Pelletgage (reported in part 3) was unintentionally flawed. I wasn’t sure at the time, but when my results were muddled and I examined the test plan, it was easy to see.

The Pelletgage is a device that measures the diameter of pellet heads, so they can be sorted into groups of similar sizes. Pellets that come in the same package often have a range of different head sizes.

We know pellet head sizes matter to 10-meter target shooters; and Pelletgage inventor, Jerry Cupples, wondered if that advantage might not extend to all pellet guns. He invented the gage so you can measure the head sizes of pellets down to 0.01 millimeters. Read parts 1 through 3 of this report to see how I’ve tested his device so far.

In part 3, the test was unintentionally constructed with bias. I discovered that 7.9-grain Crosman Premier lite pellets in the cardboard box come in 3 different head sizes — 4.53mm, 4.54mm and 4.55 mm. The predominant head size in the box is 4.54mm. I sorted pellets into groups by head size for the last test, and I shot 4 targets. Two were shot with 4.54mm heads, and the other two were shot with an equal mix of 4.53mm and 4.55mm heads. In other words, 5 of each head size were shot for each group. That was the bias in my test plan.

The results of that test were exactly opposite what was expected. The 4.54mm head pellets produced the 2 largest groups, and the two mixed-head groups were the smallest. That lead me to understand that there was probably one pellet of the three that was the most accurate, and it probably had either a 4.53mm or 4.55mm head.

Today, I’m shooting three more 10-shot groups at 25 yards. The test gun remains my TX200 Mark III, which was used in the last test. Today, I’ll shoot one 10-shot group of each head size, with no mixing.

I sorted more pellets using the Pelletgage and then gave three batches of pellets to Edith to put into plastic bags. She marked the bags 1, 2 and 3 and I shot them in that order. All shooting was done with the rifle rested directly on the sandbag, which I’ve determined to be the most accurate way to shoot this particular air rifle. Let’s look at the resulting groups now. 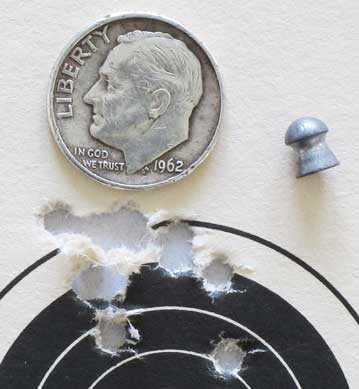 This is group 1. Ten pellets went into 0.807 inches between centers at 25 yards. 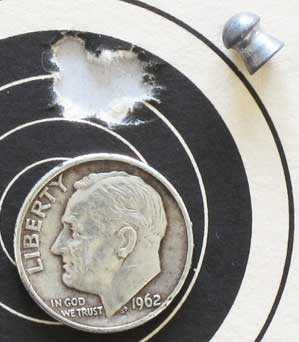 This is group 2. Ten pellets went into 0.241 inches between centers at 25 yards. Yes, there are 10 pellets in that group. 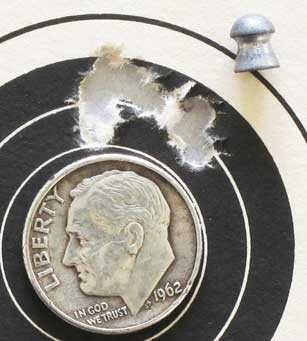 This is group 3. Ten pellets went into 0.426 inches between centers at 25 yards.

The difference is obvious!

These groups speak for themselves. Clearly, the pellet used to shoot group 2 is far and away the most accurate pellet. Group 3 pellets made a 10-shot group that is almost double the size of group 2 pellets, and group 1 pellets are much worse. But shoot them all at a target without checking the head sizes first, and the resulting group will probably look okay, even though it’ll be much larger than it could be if only the best group of pellets was used.

Note the small changes in the point of impact as the head sizes changed. Remember folks — these are all the same pellets from a single box! The only difference is their head size, which we wouldn’t know without the Pelletgage.

Every shot was perfect

As I was shooting, I had no idea which pellets were which, so every shot I took was as perfect as I could make it. I could see that the first group was going to be big, but I wanted to be able to tell you that I shot my best, and I did. These results are solid. Of course, they need to be repeated by someone else to gain some credibility; but as far as I’m concerned, they’re rock-solid, and the Pelletgage works as advertised.

I think Jerry Cupples is due some congratulations for what he’s done. He’s given us a precision gage for sorting pellets that really does affect accuracy.

I’m not finished testing this Pelletgage. I want to stretch the range out to 50 yards, and there are still .22-caliber pellets yet to come.

Parents: Do you know where your children are?And what they’re doing?Part 1 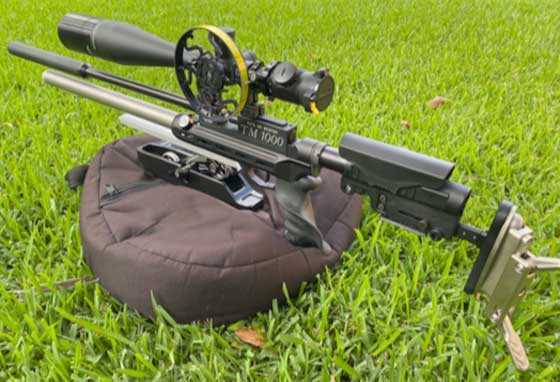