Today we’re starting to look at the ISSC M22 BB pistol from Air Venturi. This is a very Glock-y looking and feeling BB pistol, and it even says “Made in Austria” on the left side of the metal slide, but the name Glock is not on the gun. The pistol box as well as the slide indicates that this pistol is made in Taiwan.

The ISSC M22 is a .22 rimfire pistol with an exposed hammer that is uncharacteristic for Glocks. This Air Venturi BB pistol has the exposed hammer as well, and it actually functions to open the valve upon firing. Like ISSC M22 original the trigger incorporates trigger safety, which is a thin center trigger that comes back even with the main trigger, unlocking the trigger mechanism. It feels different to those trying it for the first time. It is the very foundation of their safe operation, for the main trigger cannot be pulled unless the thin central trigger is first pulled back. It gives the user a sense of control over the arm, once its operation becomes familiar.

Like most modern semiauto pistols, the M22 has a polymer frame. Two decades ago the press called such guns “plastic guns” and rumored they were hard to spot on airport luggage x-ray machnines. But all pistols with synthetic frames has ferrous metal inserts at critical stress points, so they show up on x-rays pretty well. The benefit of the synthetic frame is lighter weight and more reliable functioning, believe it or not!

The BB pistol also has a safety lock on the trigger that allows the trigger to be locked by a special combination tool that comes with the gun. The rimfire version has this as well, though none of the centerfires have it to the best of my knowledge. A parent can lock the gun and render it inoperative this way, though safe storage away from young children is still the best way to ensure safety. 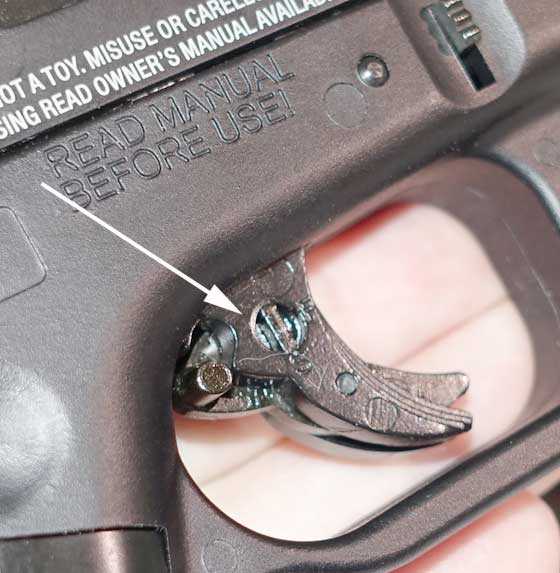 That tiny switch (arrow) is turned to lock the gun’s mechanism. 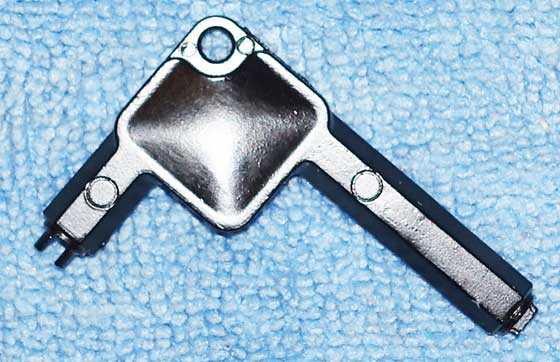 This combination tool both locks the trigger and pierces the CO2 cartridge. There is also a slotted screwdriver.

Once locked the trigger cannot be pulled. If the gun is uncocked, it cannot be fired and if the hammer is cocked it cannot be lowered. Either way this lock is positive, though it is intended to be used with the hammer down.

At the rear of the slide is another safety for lowering the hammer on a cocked gun. It works on the .22 rimfire but is just cast into the slide on this BB pistol.

Like many semiauto BB pistols today, the magazine and CO2 container are in the same drop-free unit. The BB magazine is a single-stack design built into the front of the larger unit. Press in on the mag release on the left side of the frame and the whole thing drops free of the gun. The release button is located where the firing hand can access it.

Magazine drops out of the grip. The BBs go in front in a single stack.

The CO2 cartridge is pierced by turning an Allen screw in the magazine base. The same tool that has the safety key is also for turning the piercing screw. No, it doesn’t store in the grip, so you want to keep it handy whenever you will be shooting the gun.

The sights are combat type. The rear sight notch adjusts sideways for windage, only. The front sight is fixed. Both front and rear have white inserts for rapid acquisition. The front is a square set into the post while the rear has white lines outlining the notch. 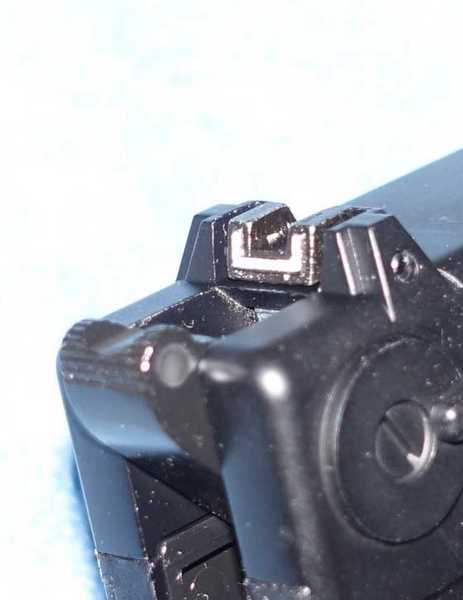 The M22 is a small gun. If it was a firearm it would be a defense-sized pocket pistol. The barrel is 4 inches long and the whole pistol is just 6.75-inches. It weighs 1.3 lbs., which is pretty light.

The metal slide comes back a long way when the gun fires, which should impart a good impulse to the hand. As light as the gun is, I expect to feel a good flip when it goes off.

There are disassembly switches on both side of the frame. They are spring-loaded and I am told they allow disassembly of the pistol. I would just leave it alone, but this is something I will explore further for you.

Many of you have talked about these BB pistols as trainers for the firearms they mimic. In the case of this one, I think that is an appropriate label, because this is one of the most realistic BB pistol lookalikes I have seen in a long time. It will be fun to see what it can do.