My late wife, Edith, once told me that my writing style should be called discovery writing. She said I didn’t have to know everything I wrote about, because I could just discover it as I went and then share what I discovered with my readers. That’s good, because I sure don’t know a lot of the things I write about. Does that make any sense?

Today’s report is on an airgun about which I know very little — the Gat. Over the years I have read things about Gats and one of them is that, while there may be many Gat-like airguns, the true Gat only comes from T. J. Harrington & Son, Walton, Surrey, England. They made them from 1937 through the late 1980s.

I bought mine at either the Findlay or Malvern airgun shows last year. It came in a green box that the Blue Book of Airguns says increases the value by 50 percent. My pistol is in 100 percent condition, but the box is rough, with both end flaps torn off. The blue book value would be about $50, and I think I gave less than that, but I can’t remember. I just knew when I saw it lying on the seller’s table that I wanted one to test after reading about it for more than two decades

The Gat is a spring-piston air pistol. It works in the same way as the Quackenbush spring guns of the 19th century or the Crosman M1 Carbine. To cock the gun the barrel is pushed straight back, pushing the piston along with it until the sear catches and retains it. But that is where the similarity ends.

The Gat’s barrel is also a permanent part of its compression chamber. When the gun is uncocked the barrel extends from the front of the frame by two inches. When the barrel is pushed back to cock the gun, it stays there until the gun is fired, making the gun nearly two inches shorter in the cocked state. I’ll tell you why it isn’t exactly two inches in a moment.

When the gun is cocked part of the breech sticks out the back of the frame. You can see this in the picture above. A breech pin is unscrewed from the breech to load either a pellet or a dart. This pin must be removed each time the gun is loaded. A leather washer seals the air inside. 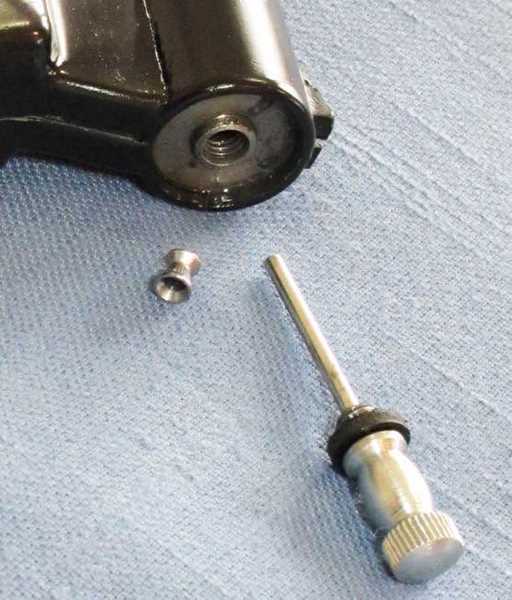 Unscrew the breech pin to load the pellet or dart.

When the pistol fires, the entire barrel springs forward, compressing air between it and the inside of the pistol’s frame. The barrel/piston moves forward violently, causing the pistol to jump in your hand. The compressed air is forced into the barrel through two small holes located behind the pellet that’s been loaded into the breech.

The pistol is just over 10 inches long when uncocked and slightly less than 8-1/4 inches when cocked. The breech comes to the rear end of the frame (what appears to be the pistol’s action from the outside) and the breech pin extends outside the rear of the gun. If this sounds confusing, look at the pictures above to understand how this gun works.

The gun weighs 1 lb. 2-3/8 oz. Mine is all die-cast metal painted black, but later models had some plastic parts. There is a nickel-plated version that is quite scarce and a gun with no finish at all — just polished metal. Mine appears to be the most common of all.

The mainspring is quite strong. It takes 48 pounds of effort against the muzzle to lock the piston in battery. That’s pressing the muzzle straight down on a bathroom scale until the gun cocks. My gun is practically brand new, so you can expect the effort to drop a little as the gun breaks in, but even with that I don’t think this is an ideal youth airgun. Kids would have to put the muzzle against something solid and push in with their body weight. I’m sure that’s what they did, but it was still hard. It’s a little easier for an adult, because you are pushing both hands together which is a powerful move for an adult. Even so, my left palm is sore after only a few shots.

I have seen some hard triggers in my time, and this Gat of mine is right up there with the leaders. My estimate for the single-stage pull is around 15 lbs. Nothing I own will come close to measuring it.

The Gat fires a range of airgun ammo through its 6-inch smoothbore barrel. It will handle diabolo pellets, darts and the mouth of the muzzle is cupped to hold a cork. In this respect, the little gun is quite advanced, for other airguns that do all of this have to be modified with accessory barrels. And reader Reb mentioned he ran a carny game in which Gats shot large plastic balls. 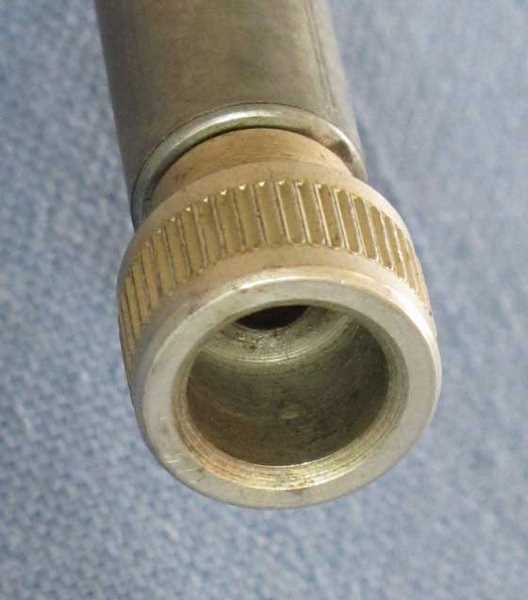 The muzzle cap is a seat for corks.

American airgunners aren’t familiar with the Gat, but shooters from the United Kingdom and its former colonies that are now independent nations, grew up with it. It is as familiar to those airgunners as the Red Ryder BB gun is to Americans. And when you consider all it can do, that doesn’t come as a surprise.

This is a very simple airgun, yet one that brings a lot of capability to the table. Don’t underestimate its importance.

Next time we will test the velocity of some pellets and darts. When we get to the accuracy test I am concerned. The hard trigger plus the violent forward surge when the barrel springs forward causes the pistol to twist to the left in my hand (right-handed shooter). I’m going to have to use a 2-hand hold to keep this pistol on the paper at 5 meters, which is all the farther I plan to test it.