Today we will begin looking at the accuracy of the Hammerli 100 Free Pistol. When I was a kid, I thought these guns were capable of incredible accuracy, and they no doubt are, but today I will tell you some real-life stories of how this exotic handgun works. I bet you will be surprised!

Whenever I test an airgun for accuracy I try to start with the pellets I think will be the most accurate. It shortens the time it takes to test the gun and I am right much more often than not. When I do get surprised, I try to make a big deal of it in the test report. because it seems so out of character for the gun I’m testing.

So, when I went to the range to test the Hammerli Free Pistol, I threw some boxes of ammo that perform well in other .22 firearms into my range box — not giving a lot of thought to exactly which brands they were, because they were the brands I always used first. I knew I would be returning to the range again and again until I learned all the secrets of this strange single shot target pistol. Boy, was THAT ever a prophetic thought!

In general, the number one accurate cartridge in any .22 has been CCI Standard Speed ammunition. It outshoots even expensive target ammo like Eley and Wolf with some exceptions. And it is consistently accurate in gun after gun. So I had the easy feeling I was beginning with the best. But there was just one problem.

I couldn’t get a round to chamber in the pistol. No matter what I did, the round would just not go in far enough to allow the breech block to close. Remembering that this is a rimfire whose priming compund is in the base of the cartridge, I certainly did not want to use force to chamber the round.

Was the chamber dirty? Was the gun mis-marked and chambered for a different round? Were the CCI cartridges somehow out of spec. for the chamber of the Hammerli? If this was an airgun I would know who to call for advice, but it isn’t. All I’ve got is me. The only thing I could think to do was try a different cartridge.

Next I tried Sellier & Bellot high-speed hollowpoints. If there is a cartridge that has less potential for accuracy in a target pistol, I can’t think of what it might be. Maybe some of that hyper-velocity stuff? Or perhaps the cartridges that come packed in bulk in large containers?

Naturally, this round chambered fine. Oh, boy! I get to shoot my expensive Olympic target pistol with discount-store ammo! You know — if they would just detune those AA fuel dragsters a little they could probably get better mileage. You think?

I studied the cartridges at the range and saw that the bullets in CCI standard speed ammo have a longer bore-sized section that reaches farther forward. This section was impacting the rifling and preventing the cartridge from being fully seated. Once I knew that, it was easy to see which cartridges would work and which would not. 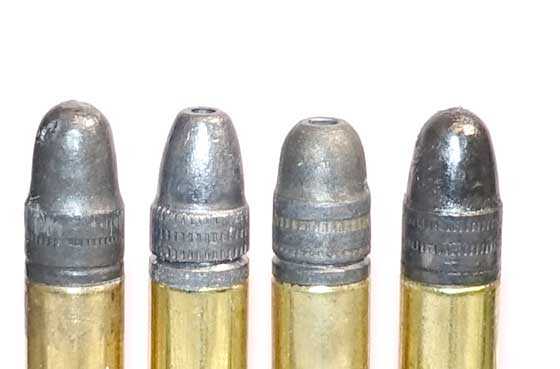 When you look closely at the cartridges you see that the bore-sized section is more forward on the two cartridges on the right. This prevents chambering in the Hammerli’s tight match chamber.

S&B ammo put five into 2.52-inches at 50 yards. I poo-pooed it at the time, not realizing I had just shot the best group of the day. The rounds hit about 7.5 inches below and an inch to the right of the center of the target, so I adjusted the sights up and slightly to the left. Not having a manual for the pistol, I just turned the adjustment knobs pretty far and shot again to see where things went. 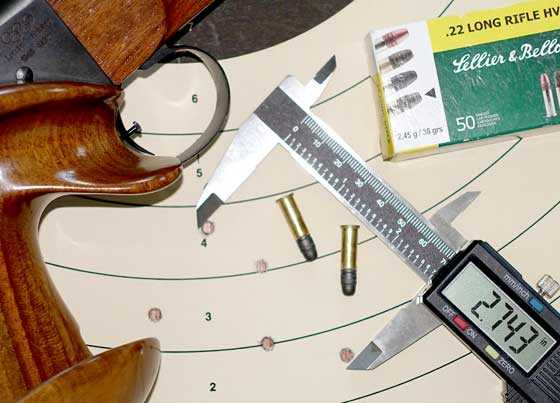 The first adjustment raised the impact point about 4 inches and brought it to the center of the target. A second adjustment brought it up most of the rest of the way, but I discovered something about the S&B rounds. They seem to avoid the center of the target. They shoot all around it without ever scoring higher than a 9. I used to tell people that was intentional — that I was conserving targets by leaving the centers alone. But that was just a joke. These S&B rounds were doing it on purpose!

Feel of the gun

I have shot other tackdriving .22s and they always surprised me with their accuracy at 50 yards. I expected nothing less from this Hammerli. Instead, it was giving me a group that wouldn’t have done credit to a $100 El Cheapo revolver. I waited all my life to shoot one of these things and it was performing like a Saturday Night Special — that is when I could get the ammo to load. Most of the time it wouldn’t chamber the rounds.

I rested the barrel across a sandbag and took special care to aim precisely. The trigger was set only when I was on target and ready to go. The gun was dead-steady and still I got groups larger than two inches. I think you veteran readers have seen enough of my shooting to know I can do better than this. A free pistol is not easy to shoot this way, but it is possible and I did it without hurting the hold or soiling the aim.

A word about the target is in order. It is huge! The paper measures 21 inches wide by 24 inches tall. The bullseye includes the 7 ring and measures slightly less than 7-7/8-inches across. While that seems large when you read about it, it actually isn’t. The bull on a 10-meter air pistol target (also including the 7-ring) measures 2.25-inches across. If it were moved out to 50 meters, it would measure 11.25-inches across, so this free pistol target is really very small by comparison. No wonder the free pistol shooters score an average of 20 points less per match than the air pistol competitors!

Incidentally, if you want to see what a free pistol match looks like, watch this excellent video that was produced by USA Shooting. Those who wondered what Jack was teaching Jill with her pellet pistols will see it in action in this video. I didn’t see anyone locking their elbows in the video, but that may be more of a sport pistol thing.

I went to the range to get acquainted with my free pistol and that did happen, though not in the way I expected. I learned that the pistol has a very tight chamber and I may need to find some real match pistol ammo for it — not ammo that uses that name, but ammo made especially for shooting in free pistols.

I also learned that though this pistol is probably extremely accurate, it’s going to take some doing to get it to that point. I can’t just feed it anything that will fit and hope for the best.

Of course there will be more. I won’t stop until I know how well this free pistol can really shoot. 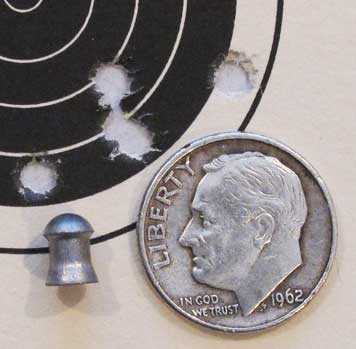