Today we have a safety issue to examine. Here is the question I got last week that spawned this report.

“Wasn’t sure how to reach you so using this venue. Was wondering about safety issue on pcps with regard to repeated pressurization over the years.Most pcps are newer and certainly built with margin of safety, but is it possible as these age and perhaps are handed down that they (the pressure vessel) can become unsafe? Read somewhere repeated pressurization can lead to eventual metal fatigue (in relation to high pressure vessels of non air rifle type). Thinking of future owners down the road. Thanks for all you do for all us airgun fans, read blog everyday.”

This was such a good question that I felt it needed an entire report for an answer. I know that precharged pneumatics (PCP) are starting to catch on, and a lot of shooters are getting into them, bringing lots of fundamental questions. Let’s start with the one this anonymous reader has asked.

The short answer is, yes, they always do. The longer the time, the greater the risk. But there are other factors that play into this. Let’s examine them.

There are pneumatics that are hundreds of years old whose pressure vessels are still functional — although I would NEVER advise using them! The reason they have lasted so long is the low pressure at which they operate. Until the 20th century, 800 psi was considered an extremely high air pressure that most PCPs never achieved. Many of the older guns operate on just over 600 psi. I know that from their terminal velocities, as evidenced by splatology forensic examination, and also by the detailed testing Dennis Quackenbush and I did on the hand pumps of antiquity. I know that some of these old reports were boring to read, but on a day like today they are the only solid evidence I can point to, to say what is and what was with certainty.

Today’s PCPs operate at much higher pressures. A few operate on 4,500 psi, while the majority use 3,000 psi. And now a few use 2,000 psi. Manufacturers build or use pressure vessels that are rated for the pressures at which their guns operate, and they build in huge safety margins. But sometimes the boutique makers will skimp in this safety area.

You risk more when buying from a boutique maker — especially one with only a year of two of sales to his credit. Many of them are building airguns that are just as safe as the guns of the larger manufacturers, but I have met some who think nothing of gambling with your life. The most dangerous I ever saw was a Farco air shotgun that was running on 3000 psi air! I wouldn’t even stand close to that one!

Water in a pressure vessel is an overrated danger — though it is still a danger. Dennis Quackenbush and I intentionally introduced water into a rifle’s reservoir and then shot it several times to see what happens. We weighed the water going into the gun and again, after a number of shots.

We then poured another 22.1 grains of water into the reservoir, assembled it and filled it to 3000 psi once more. This time when we dry-fired the rifle we held the muzzle straight up and once again shot until the reservoir was empty of air. In this test the exhaust valve was at the lowest point on the reservoir. After this test there were just 4.3 grains of water remaining. This simple test shows that PCPs tend to blow water out of their reservoirs as they shoot. But they don’t get completely dry.

I disassembled the air reservoir of a Career 707 Tanker Carbine once and did find a few water droplets inside. The owner had been filling the rifle from a hand pump pretty much exclusively. There was no rust in sight because the inside of the tank was oily with what I assume was silicone oil, but that’s not to say rust could not form this way. I am saying that there is some risk of rust inside an air reservoir from water, but the risk is lower than is commonly discussed on the chat forums.

The fear that water vapor will rust out a pressure tube is not as great as many shooters fear. However — there is some risk.

The greatest risk I know of to PCP operations is the use of the wrong gas — with oxygen heading the list. The use of oxygen in a PCP is nearly a guarantee of disaster. Medical workers see oxygen tanks and reason that air is mostly made of oxygen. Why not use it? They fail to acknowledge the risk that a pure oxygen environment creates, even though their training teaches them otherwise. 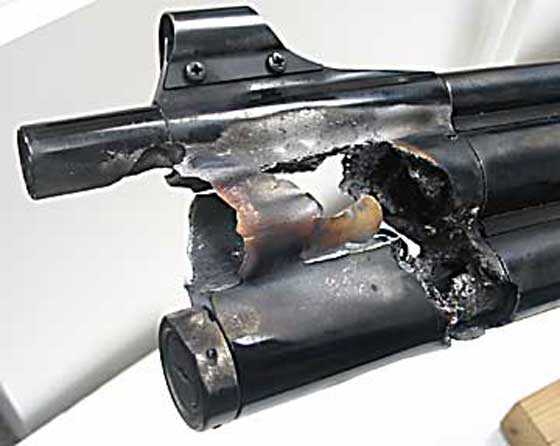 These aluminum parts were incinerated by an oxygen fire. It self-ignited while the shooter was shooting the airgun.

This is the question the reader really asked. I addressed it partly in the beginning of the report, but now I will address it fully. As a pressure vessel is filled and then discharged, the material of the vessel expands and contracts. That causes the material to work-harden over time. Eventually the vessel will become so brittle that it can fail under pressure. This is why air tanks of a certain size (2.0 inches in diameter and greater in the U.S.) are required to be pressure-tested periodically. They are tested to see if they are still flexible — i.e. not work-hardened too far.

But what about airguns? Most airgun reservoirs are smaller than the 2-inch minimum size required for pressure testing, so they don’t get tested. Some companies, such as Feinwerkbau, say their removable air cylinders must be replaced after a certain time, like 20 years. The date of the initial pressure test is stamped into the body of the tank, and that starts the clock.

But the majority of PCPs do not follow any testing regimen. And that is what the reader is asking about. Is there a point at which those guns will become unsafe? Without a doubt there is such a point. It will be different for each gun and will depend on the construction of the gun, as well as the use it has been put to. Failure is inevitable over time, but the exact amount of time is impossible to determine.

Okay, now you know the story. But let’s be safe about this. NEVER test a pressure vessel with air! That creates a bomb that can injure or kill if it ruptures. Pressure testing is always done with non-compressible water, so if the vessel ruptures, all it does is spray water.