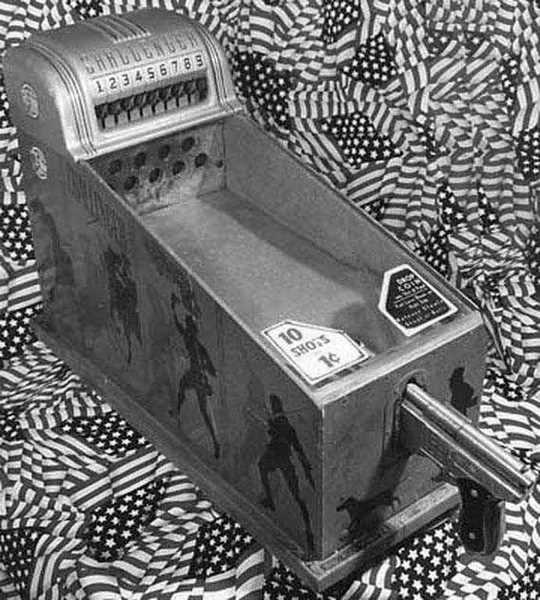 In the 1930s, the world was in the middle of a hard depression, one which many people were not prepared to weather. Lifestyles of the Roaring ’20s had to be revamped to survival in the ’30s. For store owners, the pinch of tight money was particularly defeating because money is the lifeblood of trade.

Not that there wasn’t money enough to go around. There was plenty of money. People were just reluctant to spend much of what they had for fear they wouldn’t be able to get more. Businesses everywhere were failing and people were concerned they might loose their jobs. This fear paralyzed trade at the grassroots level, which, in turn, ruined the entire economy.

Trade stimulators had been around since the 1890s, but the need for them was never so keen as during the Great Depression. Only organized crime was able to generate a reliable income with their numbers rackets, which resembled the state lotteries of today, but on a far smaller scale. For a store owner to be a numbers agent, there had to be ties to the mob, who dictated the rules and the shares of the take, just as states do today. Enter trade stimulators–devices that made all their money right on the premises and could be owned entirely by the store. No waiting for the daily payoff announcement from the mob (or the state lottery commission). 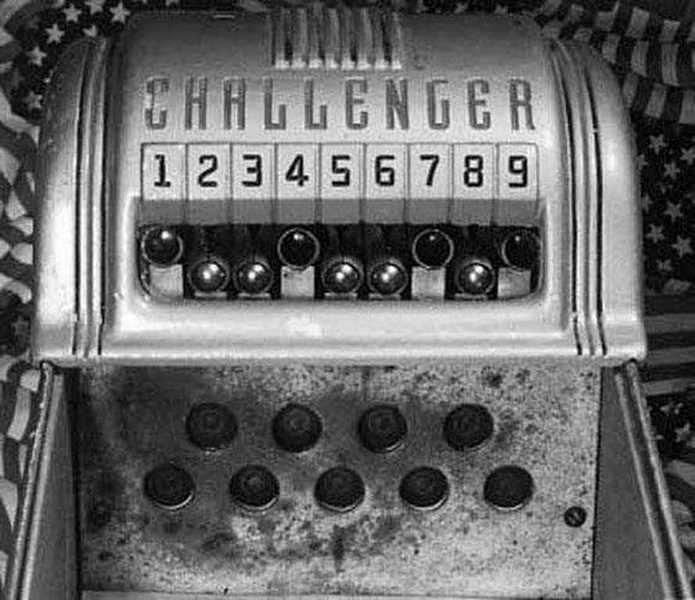  Here’s the payoff. Nine scoring balls relate to the nine disks inside the game. This is what you saw when you played the game. When the scoring paddle dropped, the captive ball inside rolled forward, as seen in paddles 2,3,5,6 and 8.

The “DROP COIN into slot” trade stimulators are a family of seemingly innocuous games that sat on countertops all over the country during and even after the Great Depression. For a penny, a person got 10 chances to do something. In the case of the machine shown here, it was to hit nine different paddles, which were scored by the steel balls showing in the window at the top. Hit the disk and the corresponding numbered paddle dropped, bringing the captive ball inside to the front. Other machines had different games, but the object remained the same–10 chances to do something for a penny. It’s difficult to imagine today, but a penny in the Depression is like more than 14 pennies today.

But it’s more than just that. That is just the effect that inflation has had on U.S. money since 1930. During the Great Depression money was in very short supply because people were reluctant to spend it — not sure of when there would be more. So that penny was a big deal to the guy who had it, and it took a lot to get him to part with it. 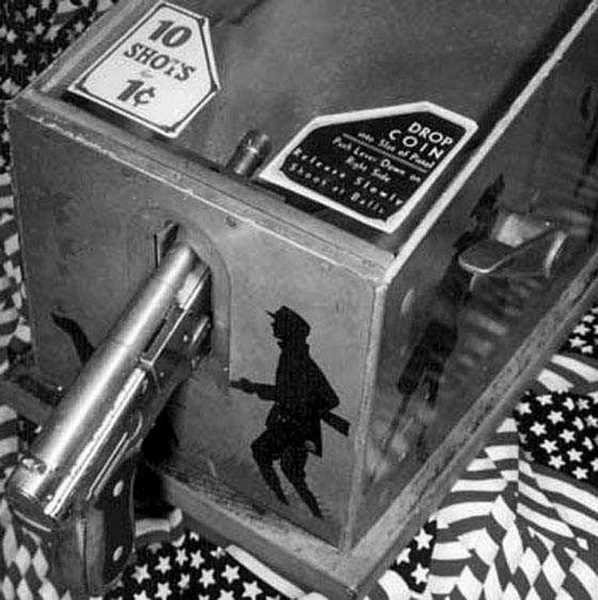 The coin goes in the slot on the gun’s right side; then, the lever on the right side of the case is depressed to start the game. There is no way to use the sights with the gun passing through the case this way.

Now, suppose the store owner told you that if you got all nine paddles in a single try, he would give you $100. Pretty good play for a penny, huh? Of course you’re no dope, so you figure the game is gaffed–which it is. The No. 4 paddle on this one is jammed so it can’t drop and show a score! You can hit the disk for that paddle all you want; that scoring ball isn’t going anywhere. But the store owner takes care of that, too. He pays a shill a fin ($5) to run out of the store screaming that he won the prize! You run in with your friends and, sure enough, all the paddles have dropped and all the scoring balls are showing. He really did it, you think. Heck, you’re a 13-year-old-kid. What do you know about life? So, the word goes out throughout the neighborhood and soon there’s a line in front of the machine–lots of kids and a few gullible adults, too.

These are the signs on the machine.

Folks, the play on this little machine isn’t that easy to begin with. The steel balls are launched by a spring-loaded plunger inside the metal gun, which is attached to the front of the box. Sometimes, the balls come out at the full 50 feet per second and are fairly accurate; other times, they just dribble out and you never know what is going to happen. The gun’s sights are completely useless because you can’t see through the wooden box that the pistol fits through. This is an instinctive thing, not a marksmanship game.

The store owner can, therefore, offer lesser prizes for a run of eight paddles, with little risk of losing. Say a pack of cheap smokes–just the thing to attract 13-year-olds. Since these prizes are possible, there will be a constant, if infrequent, run of legitimate winners to keep the momentum going. Sooner or later, some wiseguy is going to catch on to the gaffed paddle, so the owner changes it periodically. And the law never wises up–because, as you can clearly see, there’s nothing written about any of this anywhere on the game. Even if a grifter tries to cheat the play, the owner simply clears the scoreboard with a penny and chases off the grifter.

Believe it or not, these small simple games had a part to play in the ending of the Depression. They loosened peoples’ grip on their money. They also provided hours of amusement for just pennies; and, perhaps most importantly, they offered hope to people who had all but lost it.

The same concept can be turned into a different kind of game, as we see on the Shoot Hitler trade stimulator that was popular during the war. This one was made by the Paul Bennet company.

This one shot the actual penny you inserted in the gun into Hitler’s mouth. If you hit you got your penny back. If you missed, you got a gumball! The trade card on the front says “A ball of gum or your penny back on every shot.” Gumballs must have been very cheap! 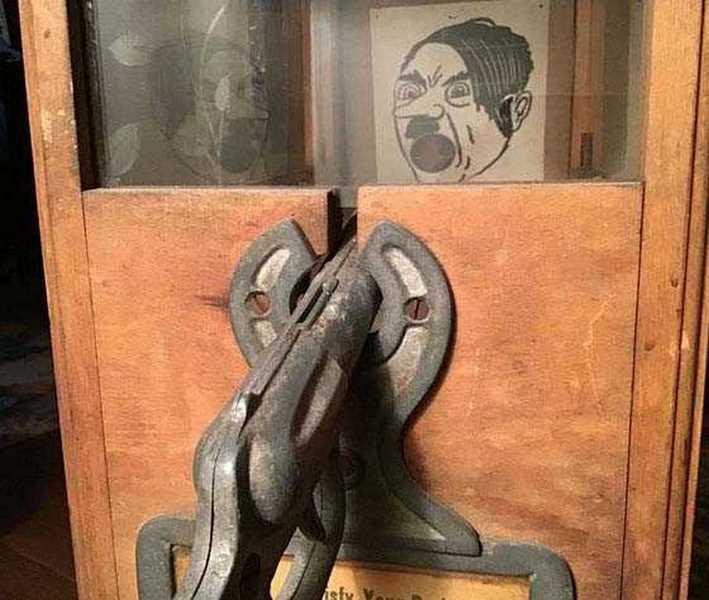 The Shoot Hitler trade stimulator asks you to fire a penny into Adolph’s mouth.

These games started during the Great Depression (late 1929-WW II) but they continued after the war and up into the early 1950s. The Challenger machine I have written about today may have been made before the war, but these exist with rockets painted on the sides of the case, and those are definitely from after the war. Many have dates of 1946 written inside the case.

There are many different types of shooting gallery machines like this one. Many were made by the ABT company and are so rugged that most still work. You can find several websites that deal in these trade stimulators.

This is a large collector field, as trade stimulators go off in many directions. But I like the ones that shoot the best.