Today we begin to look at the accuracy of the Seneca Dragonfly multi-pump rifle. But before we start, there is a picture I owe some readers. 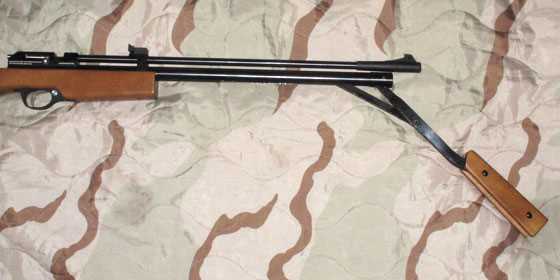 The pump handle is fully extended.

I decided to pump the rifle 3 times per shot for the entire test. In Part 2 we saw how powerful it is, and three pumps are more than enough for any pellet. The distance for this test was 10 meters and the rifle was rested. I used the open sights for today’s test. I shot 5 shots per bull and then selected the best pellet and shot a final group of 10. Let’s get started.

First up were RWS Hobby pellets. These wadcutters loaded hard because of the sharp angle on the nose. Five pellets went into 0.544-inches at 10 meters. The group was low and to the right, so I adjusted the rear sight after finishing this group. 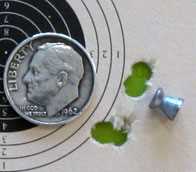 The sight adjustment has no detent so you have to watch the notch move. The test rifle sight was stiff and had to be coaxed to move to the left. However, once it started it moved fine.

Next I tried 5 Qiang Yuan training pellets. These wadcutters are often surprisingly accurate. This time was no exception, as they gave the best 5-shot group of the test — 0.377-inches between centers at 10 meters. The group had moved up and to the left from the sight adjustment, but it still needed to go more to the left, so I adjusted the sight again,  after this group. 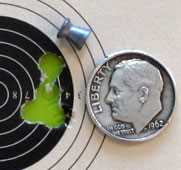 Five Quang Yuan training pellets made this 0.377-inch group at 10 meters. This is the best 5-shot group of the test.

The next pellet I tried was the super accurate Sig Match Ballistic Alloy target pellet. This time they weren’t as tight as expected, giving a horizontal group that measures 0.526-inches between centers. That’s not bad; just not the best. 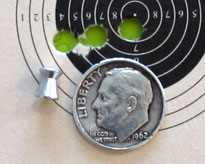 Five Sig Match Ballistic Alloy pellets went into 0.526-inches at 10 meters. It looks like three shots, doesn’t it? This is the second-smallest 5-shot group of the test.

It seemed like the sights were now adjusted pretty close. I left them where they were for the remainder of the test.

Up to this point all the pellets were wadcutters. It was time to test the rifle with a different shape, so the next pellets were JSB Exact Heavy domes. They loaded easier than any of the wadcutters. This is usually among the most accurate of all pellets in any airgun, but not this time. Five scattered around in a group measuring 0.822-inches between centers. The group is centered on the bull, though. 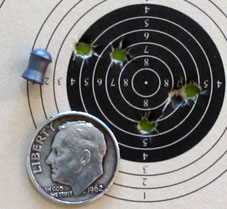 The last pellet I tested was the 7.9-grain Crosman Premier. Five of them made a 0.54-inch group at 10 meters. 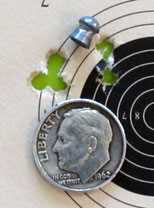 I selected the Qiang Yuan training pellets as the best ones for the final test, which was a group of 10 shots. Same three pumps as before and this time 10 went into 0.69-inches between centers. That group tells the bigger story, I think, because it shows how consistent the test rifle is. 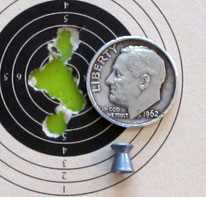 The Seneca Dragonfly is turning out to be a worthy multi-pump. It’s both powerful and accurate, plus it has no bad habits or traits. The pumping effort is a little hard and the lever makes noise, but the trigger is light and, as you can see, the gun can shoot.

While some pellets grouped better than others, only the JSB Exacts were less than promising. We are not finished with this test. I next plan to scope the rifle and back up to 25 yards, and I think all of this test’s pellets other than the JSBs have earned a spot in that test.