Today we begin looking at the Sig Air M17 ProForce airsoft pistol. As many already know, the M17 is the official sidearm of the United States military, with the more compact M18 being issued to elite troops and some others. I have already reviewed the P320 M17 pellet/BB pistol and I also have the P320 M17 9X18mm firearm that I have not yet reviewed for you. This airsoft pistol fits nicely within that group.

The ProForce line of airsoft guns was designed by Sig to use as training tools by the users of the identical firearms. For example, the U.S. Coast Guard currently carries the Sig P229 pistol in .40 caliber, and they will be issuing the Sig M18 in the future. They elected to buy the ProForce P229 airsoft pistol for training. It’s close to what they now carry and won’t be that much different when they switch to the M18. The ProForce P229 is a close cousin of the ProForce M17 airsoft pistol I am testing.

This 6mm airsoft pistol comes with an extended magazine to fit a 12-gram CO2 cartridge that powers the gun. Sig also makes a green gas magazine for this pistol and I hope to receive that magazine, too, so I can test it for you. The pistol that was sent to me for this test has just the CO2 magazine, but it is a ProForce gun that is set up to work with both magazines. Like most repeating air pistols, the magazine houses the firing valve.

The smoothbore pistol I’m testing fires a 0.20-gram 6mm plastic BB at 410 f.p.s. on CO2. When operating on green gas the velocity is 320 f.p.s., which is 90 f.p.s. slower. The slower velocity generates 1 joule of energy (0.74 foot-pounds) at the muzzle with a 0.20-gram BB. In some countries the lower velocity/power may be legal while the higher is not. In the U.S. both are legal. Naturally there is an adjustable Hop Up to tune the pistol to a specific brand of BB.

This is a true semiautomatic air pistol with full blowback of the metal slide. Like the firearm, the frame that carries the slide is polymer with metal inserts at critical points for wear. That’s the way most modern firearm pistols are designed these days. Remember, the U.S. military as well as law enforcement agencies around the world are carrying millions of these types of firearms, so ruggedness isn’t an issue. In fact, several longevity tests have demonstrated they are more rugged than all-metal handguns.

Slide release
The slide stays back after the last BB is fired. That alerts the shooter that it’s time to reload. The magazine release can then be worked with the thumb of the firing hand, and the magazine drops away from the gun freely. As long as you have another magazine that’s charged with CO2 and loaded with airsoft BBs, you’re ready to go. Magazine swaps can be made in seconds and the ambidextrous slide release (yes there is one on both sides of the slide) is also operable with the thumb of the shooting hand.

With a CO2 cartridge installed the M17 ProForce airsoft pistol weighs 28 oz. The unloaded P230 M17 firearm pistol with a standard magazine weighs 29 oz. That’s pretty darn close! The airsoft gun doesn’t gain much weight when all 21 BBs are loaded but the 17-round firearm does get noticeably heavier when its magazine is full of 9mm cartridges.

The trigger of the test pistol is single action only, which means that the slide has to be racked (pulled back all the way) to cock the striker/hammer before the pistol will shoot. That is identical to the trigger on my P320 M17 firearm. The slide on the airsoft pistol is super easy to rack. The firearm slide is somewhat harder to rack, but still not hard. The pellet/BB pistol has a trigger that’s double action only, so racking is unnecessary.

I haven’t tested the airsoft pistol trigger yet, of course, but while just fooling with it, it seems close to the pull of the firearm trigger. And both of them are decent.

There is an ambidextrous safety lever (a lever on either side of the slide that will put the gun on safe). I can put it on and take it off with the thumb of my gun hand. I can do the same with my firearm pistol. The manual says there is a red dot on the frame to tell the shooter whether the safety is on, but the test pistol does not have one.

The pistol has fixed sights. One white dot in front and two in the rear simulate the tritium night sights on the firearm.

The manufacturer’s suggested retail price for this pistol is $179.99, which puts it into the higher-end category. This is a category that is starting to populate with several airguns that are close copies of law enforcement and military arms. They all seem to be designed with training in mind, so perhaps we are seeing a new market in development.

An airsoft pistol at this level has to disassemble, and indeed this one does. In fact, I found disassembly of the airsoft pistol so quick and easy that after I was done with it I disassembled my firearm for the first time. Man, did Sig make it easy for a guy who grew up on 1911s! 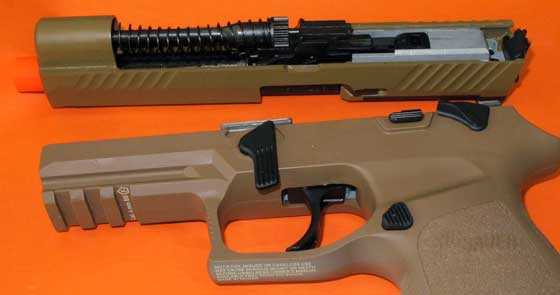 The slide comes off the frame in seconds. The toothed wheel in the center of the slide is the gear for the Hop Up adjustment.

I own the firearm and the BB gun

I am fortunate to review this airsoft pistol because I also own the firearm and the pellet/BB pistol. I don’t have to wonder how those two feel or operate — I can test them side-by-side as I’m examining this airgun! And as you can tell — I have been doing just that! 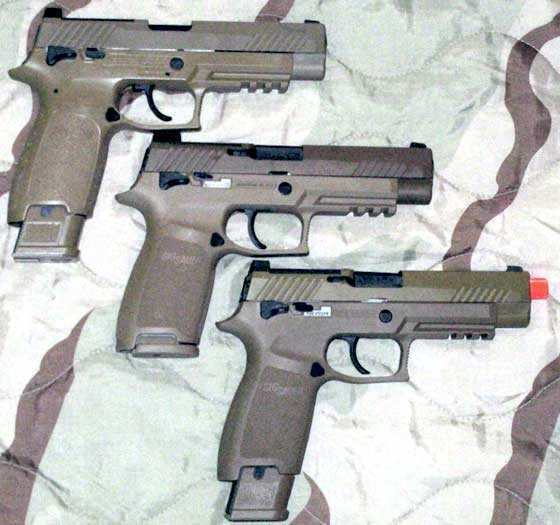 Here they are. M17 BB gun on top, firearm in the middle and airsoft gun on the bottom.

I have a good supply of 0.20 and 0.25-gram BBs, so the accuracy test will be quite thorough. When I test the green gas mag I may even try shooting lighter BBs.

The Sig ProForce M17 airsoft pistol is a high-end airsoft gun that will be my pleasure to test for you. And this is a preamble to a larger series in which I test the firearm, pellet/BB gun and, where possible, airsoft gun side-by-side for training value. Stay tuned!

Should I fix this old airgun?