Today we test the velocity of the new Sig Super Target single stroke pneumatic (SSP) target pistol, plus I have a number of additional things to address. Let’s get started!

First, let’s talk about storage. In the owner’s manual Sig tells you to do two things that I been doing for SSPs and recommending for many years. Number one, they tell you to store the pistol with the barrel (top strap) broken open. They don’t say it but I think this is to relieve pressure on the o-ring that seals the breech. Number two, they tell you that if the pistol has not been used in a while to pump and dry-fire the pistol 3-5 times to ensure the elasticity of the piston seals. I have been doing this for several years and most recently I told you about it in the tests of the IZH MP532 target air rifle. I even gave you a procedure for getting an SSP ready to fire if it had older seals that may have become hardened with age. Today I am going to test that and also answer a couple questions that reader Lian asked me last week. 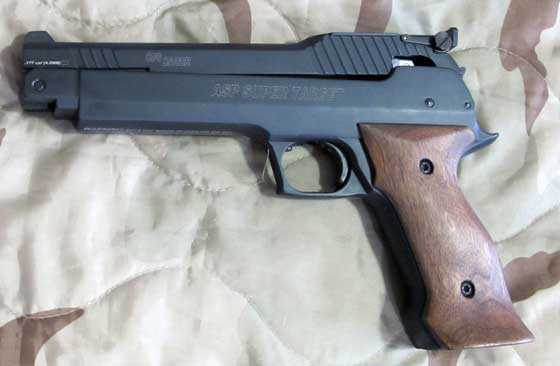 Sig recommends storing the Super Target broken open like this.

The latch for the top strap

Reader Lain asked me about the hammer that I said is used to latch the top strap. He couldn’t see one like that on the FAS 6004, which he believes is the basis for the Super Target. So I photographed this one for him. 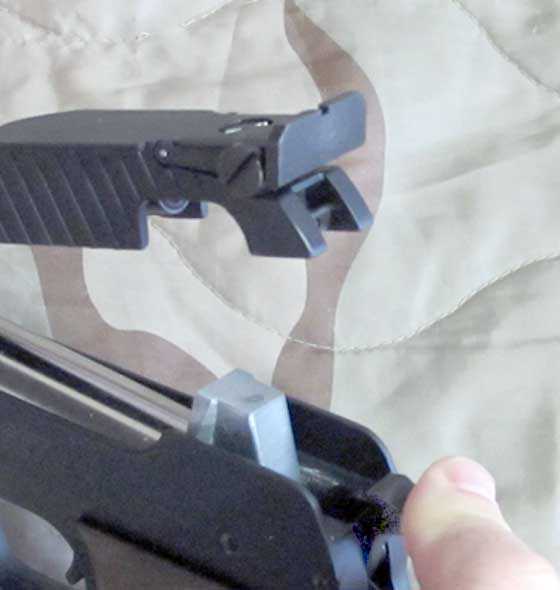 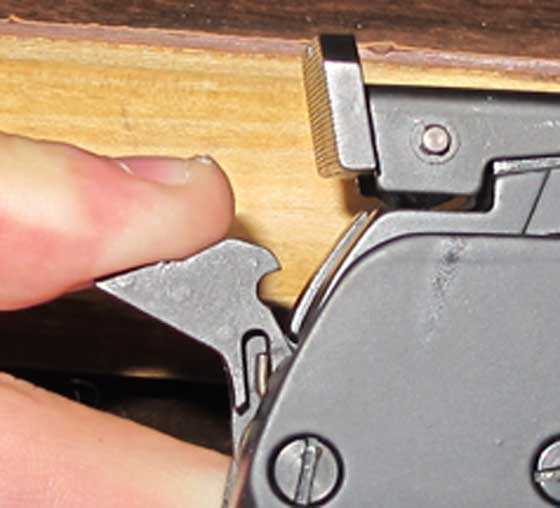 Here is the hammer pulled back. You can see the cutout for the bar in the top strap.

Several readers asked about the valve — is it like the valve on a Beeman P17. No, it is not. The Super Target valve is a dump valve. That is a type of valve that, when the hammer hits the valve stem, it remains open so all the air can exhaust. That raises a second question. Can the Super Target be cocked and dry-fired without pressurizing it?

I will say this — it is possible to cock the gun without pressurizing it by lifting the top strap up almost vertical until you hear a click. It is then possible to dry-fire the pistol. I asked Sig whether dry-firing is okay and they didn’t see that it was a problem. The hammer strikes the valve stem of the Super Target pretty hard when you dry-fire and I don’t think I’m going to do it as a matter of course, though I don’t suppose a few shots now and then can do any harm.

Sig rates the Super Target at up to 400 f.p.s. I assume that is with lightweight lead-free pellets. They recommend Sig Match Lead pellets for the pistol, so let’s start with them. Before I began shooting I dry-fired the pistol (with air) 5 times, per the manual.

I must say this pistol cocks with absolutely no noise that I can hear. It is extremely smooth. And the pumping never gets too hard. I will test it in a bit, but I think it’s lighter than the Beeman P3 or P17. I no longer own a Daisy 777 or 717, but this pistol feels as light to pump as I remember them being, and they are the lightest SSP pistols I have ever seen. If the pumping effort has kept you from an SSP pistol, this may be a good one for you. At least put it on your short list to try.

The next pellet I tested was the 7 grain RWS Hobby. Their light weight makes these wadcutters the speed demons of the lead pellet world. Ten of them averaged 338 f.p.s. in the Super Target. The spread went from 333 top 343 f.p.s., so again a 10 f.p.s. spread. Very consistent.

Can it go faster?

Okay, this is also for Lian. I had planned last week to do this in today’s report and held off discussing it because I wanted everyone to know the answer at the same time. Lian asked me if pumping partial strokes the way I told you for the IZH MP532 rifle would also work on this pistol. The 532 and IZH 46 pistol have a solid pump cup on the end of their pistons. Lian suspects that the Super Target has an o-ring on the side of the piston to seal, because the FAS 6004 pistol on which it is based has one. That’s like the pistons of the P17 and P3 that we have seen and worked on.

I wasn’t sure how this pistol would react, so I decided to test it. I pumped the pistol partially 20 times to work and soften the o-ring It may not be a pump cup but it is a synthetic seal and working it should make it more flexible. And sealing the piston should work regardless of how it is done.

Then I shot 10 Sig Match Ballistic Alloy pellets for speed. Before each shot I pumped the pistol partially once before pumping it all the way. Here are the results.

There you have it. The average for this string is 408 f.p.s., which is 23 f.p.s. faster than the previous average of 385 f.p.s. when I didn’t do partial pumps. Lian, that is the answer. Yes, o-rings respond to partial pumps in the same way that pump cups do. And everyone else — yes, the Super Target pistol is a 400 f.p.s. air pistol. And the spread for this string is just 9 f.p.s. — 404 to 413 f.p.s. So BBs shenanigans don’t disrupt the Super Target’s stability.

I researched the FAS 6004 pistol because Lain had referred to it and I found a problem with some of their breeches. Apparently they have a chamfer in the breech that is sometimes not cut smoothly. So I examined the breech of the Super Target I’m testing and found it had a chamfer that’s as smooth as glass. That’s what I expected from Sig Air and little details like this are what take so much time to iron out before airguns make it to the market 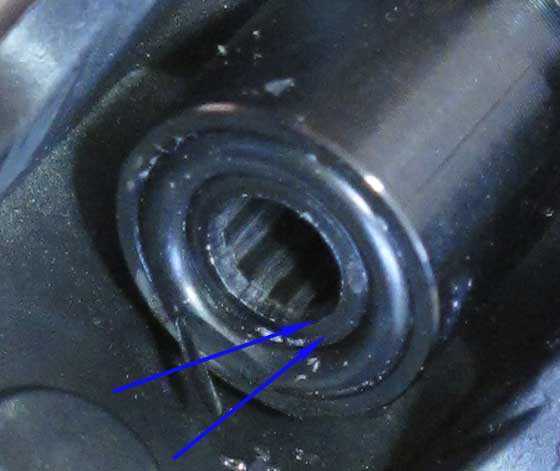 The breech chamfer is between the points of the two blue arrows. It is so smooth that you can see no detail! Yes, the rifling is also cut in a leade (a tapered lead-in to not damage the pellet so much when it loaded), but that’s not what I’m referring to here.

I measured the effort to pump the pistol at 18 lbs. on my scale. As a comparison, the Beeman P17 needed 35 pounds to pump, so this pistol only needs 1/2-pound more than half the effort to pump as the P17. That is what I was talking about when I said it is easy!

This report is getting long. I wanted to adjust the trigger for you today, but I’m not going to rush it. I will just measure the trigger pull as it came to me in this report and give it a longer writeup next time.

Stage one took one pound to complete. Stage two broke at exactly 2 pounds. Next time I will adjust it.

So far, so good. No, strike that. So far — excellent! I hope this Super Target is as accurate as it is nice in all the other important categories. Because I don’t think I’m sending this one back. A guy can’t have too many accurate air pistols! 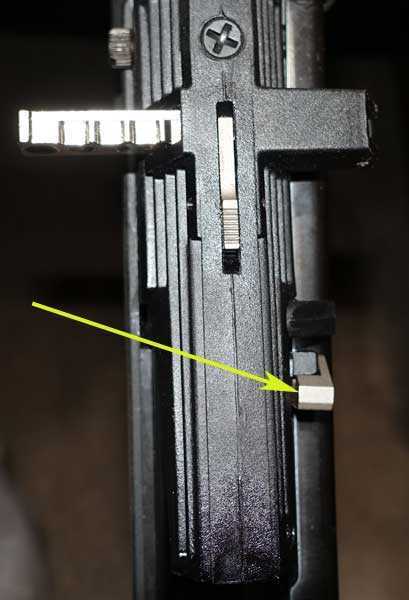