Today we look at the accuracy of the IZH-61 repeating pellet rifle I am testing. And I’ll give you a heads up. There is a surprise coming. At least it surprised me!

I shot off a rest at 10 meters. I tried to use the artillery hold, but the pistol grip of the 61 sort of foils that. Let’s just say I held the rifle gently. And I shot 5-shot groups.

I had planned to shoot one pellet from each chamber of the clip at different targets when I found the best pellet, but as you will see, that will not work today. I will explain as we go.

I also selected one clip that I knew was good from the velocity test and stuck with it throughout today’s test. This rifle has too many variables!

Nothing like an accuracy test to show me the good and bad sides of an airgun. This time it was the bad side, with respect to the rear sight. The notch in the sight is far too wide for any sort of precision shooting. Even though the sight is halfway up the rifle I found myself wondering if I was holding the front sight flush with the top of the rear and also if the front sight was centered. It was so unsatisfactory that I planned a retest for accuracy with a dot sight regardless of how today’s test goes. When you see my test results I think you will agree that was a good call. This is the surprise I mentioned earlier. It affected the whole test.

Falcon pellets did well in the velocity test, so I started with them. I consider the first bull to be the sight-in target. The pellets hit high and to the left. Three are in a small cloverleaf and the fourth is close, but shot number five is far away. I have no idea which one it was — except it was not the first shot. The group measures 1.129-inches between centers, but that little cluster of three made me think I was onto something. 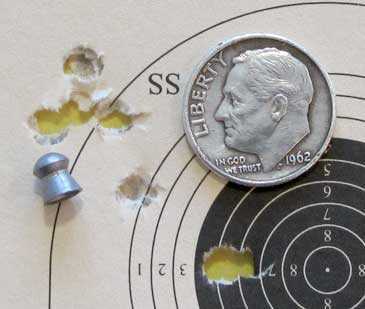 This sight-in group of Falcon pellets measures 1.129-inches between centers at 10 meters. That little cloverleaf at the upper left was what caught my attention!

I adjusted the rear sight down and to the right — or so I thought. The rear sight moves for windage by a hinky method of loosening two screws and shoving the sight plate sideways. It is very hard to control. 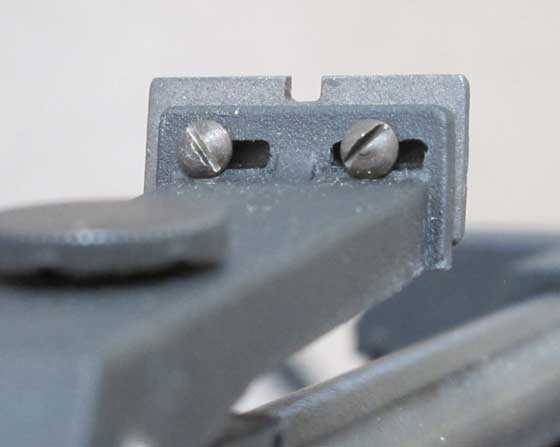 Theoretically the rear sight notch moves in both directions, but I hate it when they adjust this way! One of the screws fell out as I was adjusting.

What if I really, really tried?

I always try my best, but when a gun challenges me like this I have to step up the concentration. If you have shot for any length of time, you know what I mean. The second group landed low and still to the left of the bull. But this time all five Falcon pellets went into 0.453-inches at 10 meters. As you can see — that is a group! 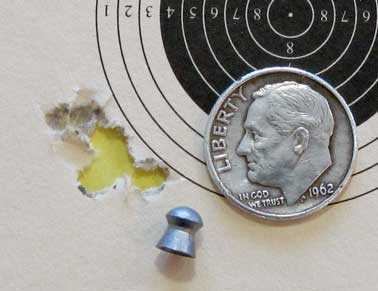 Now we’re talking! The IZH-61 put five Falcon pellets into 0.453-inches at ten meters. It’s not the best group you could hope for, but it’s far better than the first one.

Now that I knew this rifle could shoot I adjusted the rear sight a lot more to the right and I raised it up two clicks. I hoped to get a small group in the center of the bull. What I got was five pellets in 1.367-inches. The center of the group is higher and fairly centered on the bull, but this is the largest of the three groups of Falcons I fired. 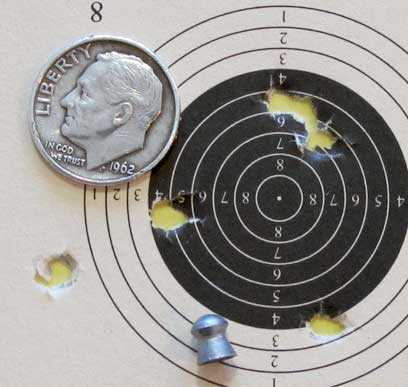 So which target is right? Does the 61 shoot or does it spray pellets all over the place? Well, I know the answer and I’d like to share it with you.

The first target that I am calling the sight-in target had that cloverleaf of three shots that gave me assurance that this rifle could really shoot — if I really tried. The second target proved I was right, and also showed that this clip that I’m using is lining up pretty well for all 5 pellets. The third target shows the effects of that rear sight. The bull for this target was located at the right side of the target paper and the rear sight notch was so far to the right of the bull and the target paper that I had to guess where it was!

This is when I knew that the rear sight was causing the problem with accuracy and not the rifle, itself. But I continued the test to see whether any other pellets stood out.

Since Falcons were good I thought JSB Exact RS pellets might be good, too. They are similar in shape and weight. I also shot them at a bull on the right side of the target, so I really had to concentrate on that rear notch to keep them together. Five pellets made a group that measures 0.724-inches between centers. Given the problems with the rear sight, I think this group demonstrates that JSB RS pellets should be given a second chance. Not today, but in the next test. 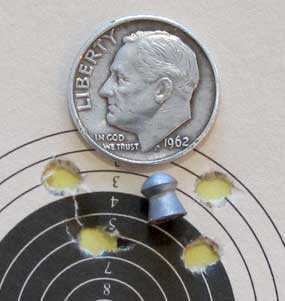 Five JSB Exact RS pellets made this 0.724-inch group at 10 meters. I believe the lower hole that’s second from the left has two pellets in it.

Next up were five H&N Finale Match Light pellets. Despite their name they weigh 7.87-grains, so they are more of a medium weight pellet — especially in the IZH-61! They all landed lower on the target, but four out of five landed in 0.406-inches! The fifth shot opened the group to 1.03-inches at 10 meters. I was now shooting at the bulls on the left side of the target paper, but for some reason that didn’t give me the same problem that the bulls on the right side gave. 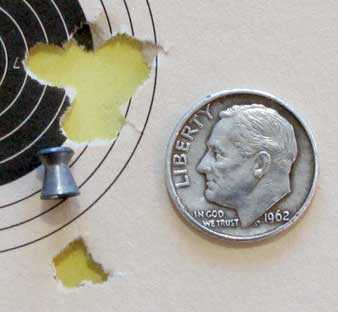 I thought I had discovered the best pellet, so I shot a second group of Finale Match Light, and this time really concentrated on the sights. Unfortunately the rifle decided to act up. I could hear the pellets going downrange much slower than with the previous group and four out of five landed much lower on the target. This group is a disappointing 1.667-inches between centers — the largest of the day! 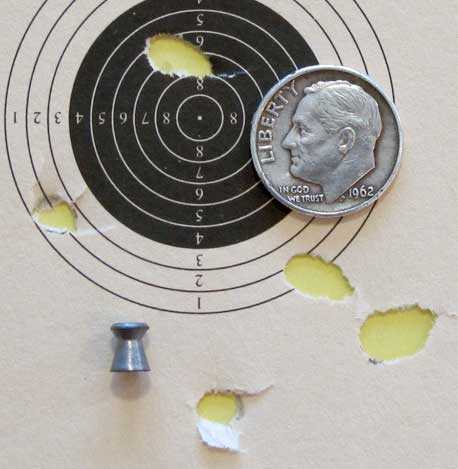 Notice that three of the pellet holes are ripped to the side. Now look at the last target and see that the lower pellet hole is also ripped on one side. I think these pellets are going too slow to stabilize, so this is not a pellet for this rifle.

No longer seating pellets deep in the clip

It was at this point in the test that I stopped seating the pellets deep in the clip. I only did that initially to keep them from falling out, and it seemed they would stay in with finger pressure, alone. They get pushed through the clip and into the breech by the bolt anyway, so deep-seating doesn’t seem to have any benefit that influences accuracy. Of the rest of the pellet, only one fell out of the clip as I loaded.

I needed a lighter target pellet to test with. The next pellet was the 7-grain RWS R10 Match Pistol pellet. Four of them went into 0.584-inches., One pellet went way low and to the right — almost like it hit something on its way downrange. That opened the 5-shot group to 1.626-inches! I have no explanation for that group, but it made me shoot a second one. 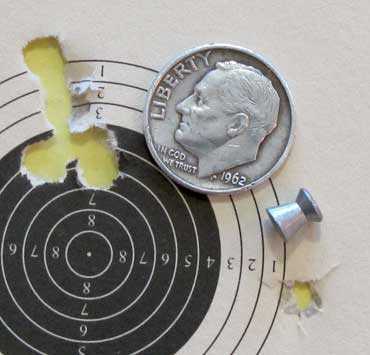 The second group is all together, measuring 0.539-inches between centers at 10 meters. I think the R10 Match Pistol pellet is right for this IZH-61. 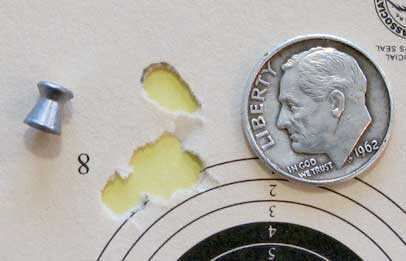 The last pellet I tried was the RWS Hobby. It weighs the same 7 grains as the R10 Match Pistol, but it is a considerably different pellet. Five of them went into 0.958-inches at 10 meters. 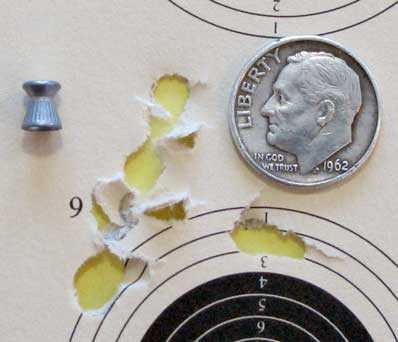 The rifle’s trigger is single-stage and as vague as a rumor. But it is light and does not hinder accuracy.

The rifle has a slight buzz when it shoots. Given the low power level I would leave it alone. Several readers posted similar velocities to those I posted in Part 2, so I think this rifle is performing as it should.

The clip functioned perfectly in this test. Ever since I lubricated it in Part 2 it has gotten better and better, until now it seems perfect.

I have never looked at an IZH-61 as closely as I am in this series. I loved the IZH-60 single shot, which is the accuracy champion of these rifles. The 61, being a repeater, just cannot compete. But it is accurate! And I think I have discovered in today’s test what needs to be done to get all this one has to offer. Next time there will be a dot sight on the rifle and we should see more consistent results.