In checking to see whether they all made it to the timeline, I discovered this report from 2017, in which I mentioned wanting to shoot the rifle with an open rear sight. I never did that, so today is the day. I thought I’d just have to move the rear sight but you know how little projects sometimes expand? This one sure did! This will be the tale of what happened.

I told you in Part 2 that the rear sight can be transformed into a sporting sight by removing the peephole. There is also a forward ramp on the spring tube for the sporter sight, so there is enough distance for the eye to pick up the rear notch.

The Diana 50 has two ramps for the rear sight. The one on the rear is for the target peep and the one in the front is for when the sight is converted into a sporting sight.

The tops of each ramp are serrated with grooves that match the special “foot” that’s on the bottom of the sight. This foot is pressed down into those grooves and makes a mechanical bond that will not slip from recoil. 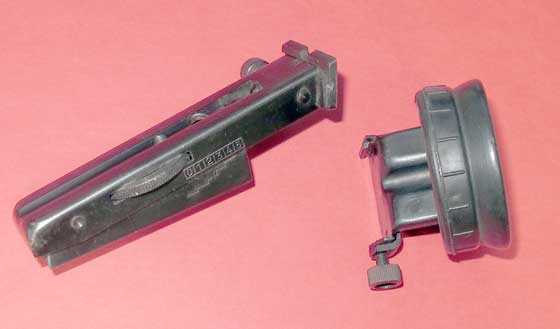 After removing the rear sight from the rifle, I removed the peephole from the sight, transforming it into a sporting rear sight.

That lone screw on top of the rear sight pushes the foot down into the grooves in the ramp.

The foot that contacts the grooves on the ramps can be seen underneath the rear sight.

To use the rear sight as a sporting sight with a notch, I had to move it forward. I moved it to the front end of the forward sight base ramp. Then I screwed that lone screw back down and the foot meshed with the grooves in that ramp to secure it. 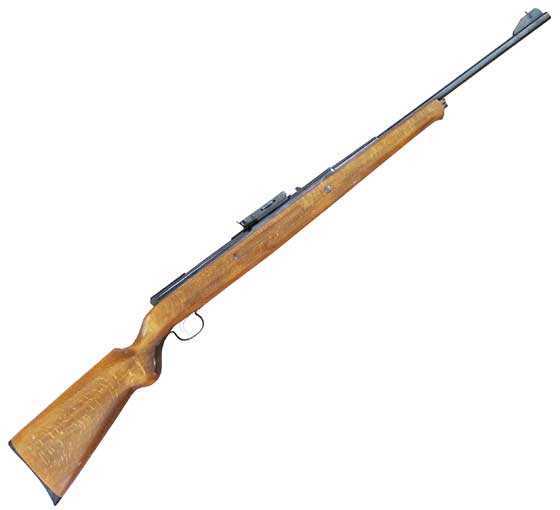 |With the rear sight moved forward the Diana 50 is transformed into a sporter.

One more thing needs to be done to complete the change to a sporter. I have dialed up the wide target post front sight element, and the rear notch has to correspond. It had been set on a wide cupped notch when the peep was installed, but the notch plate was rotated to put a square notch in its place. 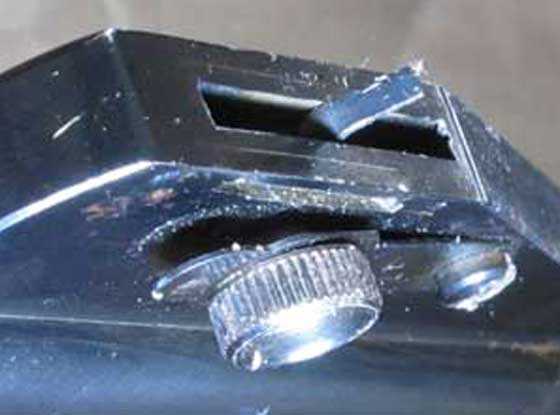 The Diana 50 has four different front sight elements that can be dialed into place. This is the target post.

To rotate the square notch plate, the rear sight needs a little elevation so the corners of the plate can clear the sight base on the rifle. That’s how low the rear sight adjusts! 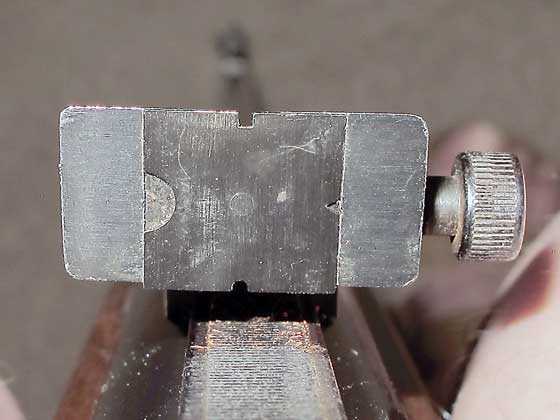 This rear sight notch plate has three notches — a square, a Vee and a U-shaped one. The fourth large U-shaped notch on the left is for visual clearance when the peep sight is clamped on.

I was surprised to see how much elevation adjustment there is in this particular rear sight.

The rear sight adjusts up very far and the wheel that adjusts it has ten clicks for each step seen on the bottom plate of the sight assembly. The numbers on the top plate tell you which range of elevation the sight is in.

Since it’s been so long since the last report, I read Part 4 thoroughly to see how the rifle was performing. I read that the rifle buzzed when it fired in the last test, which is to be expected with these older spring guns. But in this day and age we don’t have to put up with it, do we? I probably know what you are thinking. You think I stripped down the action and gave it a complete lube tune, but this time I didn’t. Instead I did almost exactly what I said I might do at the end of Part 4.

“There is a little bit of buzz when it fires, so it might be necessary to inject some Almagard 3752 grease into the mainspring to quiet down the powerplant. That could only make the shooting experience that much better. I might have a go at the trigger adjustment while the stock is off (for access to the mainspring). Don’t know if I will do any of this, but I’m writing it down as a reminder.”

I thought, “Why not?” The rifle is ready for another accuracy test, so why not do what I thought about last time? Only my tube of Tune in a Tube grease is so low that it no longer injects. I had purchased a 14-ounce grease gun tube of Almagard 3752 grease (same stuff as TIAT), but that can only be applied when the gun is apart and there is access to the parts to apply the grease directly. However, as I was rooting though my lubricant shelf my eye fell on the injector tube of Extreme Weapons Grease.

This tube of Extreme Weapons Grease is nearly full!

I used EWG on my Webley Hurricane we recently tested, and you may remember that it resolved all the problems I had with galling. It’s a thick grease like TIAT, so once more I decided to give it a try.

I didn’t want to completely disassemble the Diana 50’s powerplant, but to get to the mainspring I had to at least get the action out of the stock. And that project turned into the rest of my day!

The action is held in the stock by three screws. The front triggerguard screw threads into the spring tube like we see on most spring guns. The threads are longer than I expected but there were no surprises.

The cross-bolt forearm screw is actually a proprietary two-piece affair, with a threaded bushing that holds the cross-bolt. It’s just as complex as the bolt itself. It came out easily, though the threads were about twice as long as I expected. 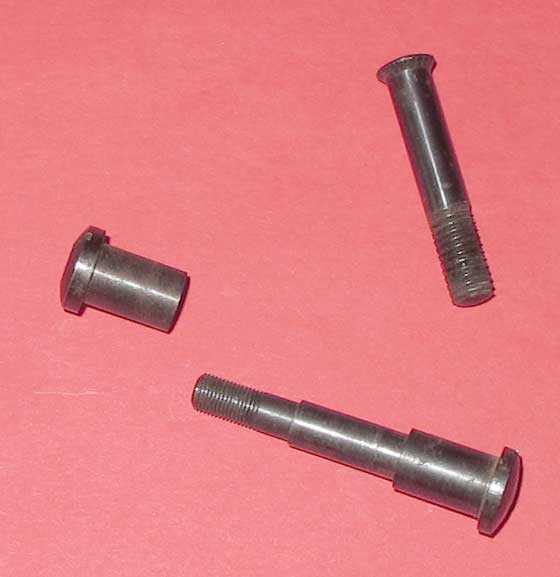 The front triggerguard screw is at the upper right. The stock cross-bolt and bushing are the two lower items. The bushing is actually half of the axel for the underlever during cocking.

With those two screws out I expected to separate the barreled action from the stock. Unfortunately there was one more screw, or nut, to deal with. Diana put a nut and washer on the threaded post that the underlever locks to. It has to come off and I saw the forearm had cracked from some force that could have been applied in the past. 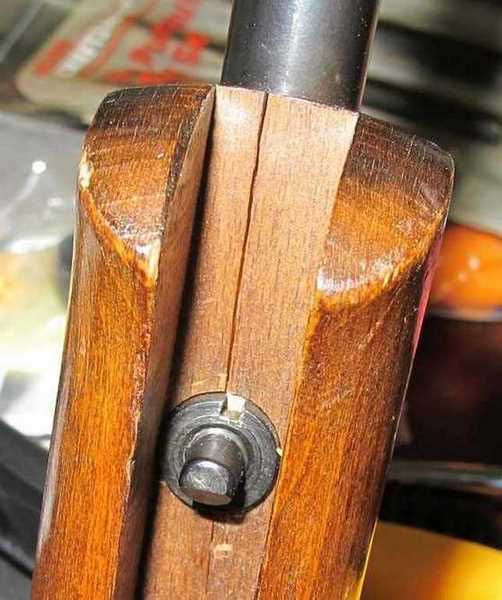 The forearm is also held on by this nut that screws to the post where the underlever latches when closed. The stock has cracked along the grain — probably from someone trying the separate the stock from the barreled action before this nut was removed.

I looked at that nut and thought to myself, “Oh no! I have to make a special spanner to grab that nut!” I then spent the next 20 minutes looking though all my parts and tools to see what I could use to make the spanner. I could sacrifice a small socket from my tool kit and use a Dremel to grind away the sides until there were two short posts to fit into the notches on that nut. I looked and looked, but found nothing. If the socket was large enough to fit the notches it was too wide to fit into the tight channel in the stock. If it was small enough to fit in the channel it wasn’t wide enough to grab the two notches.

Then I thought about a flat piece of steel. That would be even easier to grind to shape, but the only piece I found was the flat tip of my longest screwdriver — the one I use to loosen the long screws in rifle butts that are held to their actions that way. I didn’t want to ruin it, because it took me years of combing though pawnshops to find it!

I decided that after lunch I would go to the hardware store and just buy a piece of steel of the right width. Then I stopped for lunch.

After lunch I decided to try one more thing before going to the store. I put the blade of a small screwdriver in one of the notches and tried to unscrew the nut. It was loose and came right off! I had wasted all that time thinking I had to make a special tool when the solution was so simple! Boy, am I glad I checked! The nut came off in less than a minute and the stock could be separated from the barreled action. I now saw that the washer under the nut is actually a spacer. 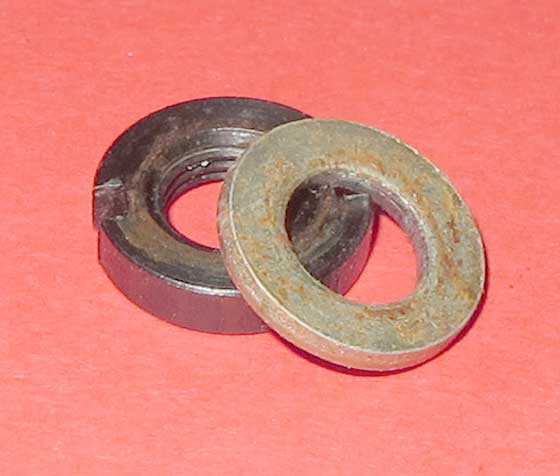 The nut and washer/spacer are off.

Now that the stock was separated, I put some wood glue on both sides of the crack and troweled it in with the flat blade of a screwdriver. Then I clamped the stock to hold for several hours while I attended to other things. I left the repair clamped for about three hours and when the clamp was removed the crack was no longer visible.

With the action out of the stock and the cocking link removed I could see that the mainspring was bone-dry. No wonder the rifle buzzed a little when it fired!

The mainspring was bone-dry. If ever there was any grease or oil on it, it’s now long gone.

Using the injector on the EWG tube I injected grease everywhere I could reach — including some on the body of the piston. I also lubed the cocking linkage with EWG, as it is under considerable stress when the rifle cocks. And I lubed both the bushing and the cross-bolt that the cocking link pivots on.

The cocking link is in two parts and you can see the pivot hole that the stock cross-bolt fits through.

After three hours the glue holding the crack in the stock had set, so I carefully assembled the rifle. When I shot it the first time after assembly, it was smooth. There was no hint of the vibration I formerly felt. As the rifle is fired the grease will slowly spread around the inside and hopefully get to all the parts.

Shooting the rifle was the proof of the job, but I wondered what the EWG had done to the velocity. This was an extremely thin application, so most of the velocity should still be there. I remembered that the Diana 50 was on the hot side for a target rifle, so I tested it with two of the pellets that had been used in the Part 2 velocity test.

In Part 2 the rifle cocked with 25 lbs. of effort. It still cocks with that much force. It has been so long since I last shot the rifle that I can’t comment on any difference in the feel during cocking.

This has been a long-delayed Part 5 report on the Diana model 50 underlever. I still have accuracy to test with the sporting sights, so there is more to come. It’s great to be back with this old sweetie!