Today we look at the accuracy of Diana 23. I sure hope she’s accurate!

It took me half an hour to set up the range indoors, so I wanted to make this count.

I shot the rifle from a sandbag rest at 10 meters. I used the artillery hold and did not test anything else. I rested the rifle on my off hand that was back almost touching the triggerguard. The stock is a little short to allow me to treat it like other adult rifles, so my off hand placement was the best I could do. I shot differing numbers of pellets at each target so I’ll address that when we get to it.

First up was the RWS Hobby pellet. Given that this is a Diana rifle I felt RWS pellets had the best chance to be good. Since the Hobby is a wadcutter and it landed at 10 o’clock just outside the bull on the left I saw the first shot clearly without a spotting scope. But I didn’t see shot number two. And when shot three enlarged the first hole ever-so-slightly, I felt that Hobbys were a good choice.  I decided to shoot ten of these.

After 10 shots I had a nice little group just outside the bull. It measures 0.574-inches between centers and is what I would call a keeper.

I have to tell you that the pictures that follow are poor because I wasn’t able to lug out my heavy camera tripod that I normally use. I had to use a flash and hold the camera by hand. None of that is good for these kinds of pictures. 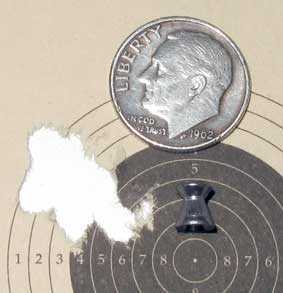 I know what you are thinking after seeing that group. The sights need to be adjusted to the right. But the 23 sights don’t have a windage adjustment. They do have dovetails, both front and rear, and it is possible to push either or both sights to make small left or right corrections. But when I examined the front sight I saw that someone had moved it already — and to the right, which is in the wrong direction for what I needed with this pellet. You move the front sight in the direction opposite of how you want the pellet to move.

Seeing that I thought I should leave the sights alone, because somebody went to the trouble to put them where they are. They may be right for a certain different pellet and with luck I might find it. 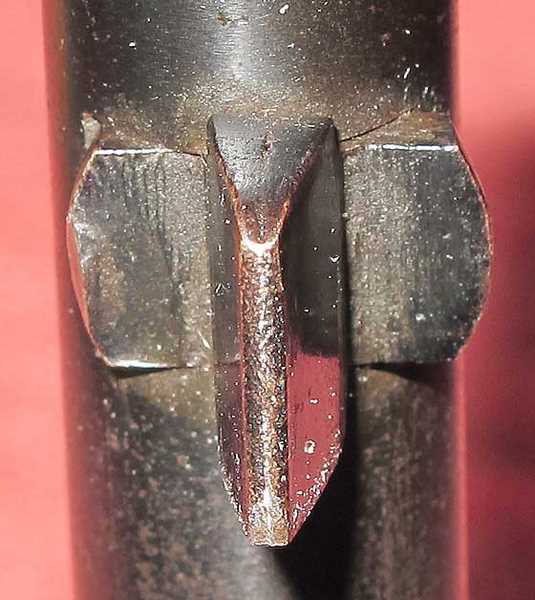 This top-down photo of the front sight shows that someone has drifted it to the right. You can even see the metal distortion on the left side of the sight base where it was hit with a hammer.

The next pellet I tested was the H&N Finale Match Light wadcutter. The first shot hit at 10 o’clock even farther to the left than the Hobbys. When the second shot hit even farther away and opened this group more than the entire first group of Hobbys, I decided to only shoot 5 shots. They made a very horizontal group that measures 0.795-inches between centers.

With open sights a vertical group often means you can’t see the front sight very well. A horizontal group means either the breech joint is loose or you are just shooting a bad pellet for that rifle. The breech joint on this 23 is fine. 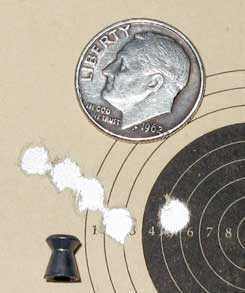 Five pellets gave me a very horizontal group that measures 0.795-inches between centers.

Next I tried 5 RWS R10 Match Pistol pellets. I thought they should do well in a Diana, and they did. Five went into 0.509-inches at 10 meters. However, given that the Hobby group is not much larger and was shot with 10 pellets, I don’t think the R10s are any better. 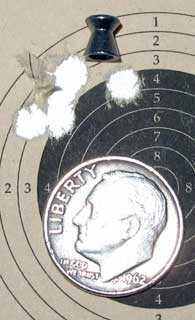 The R10 is a great pellet for the 23, but it’s costly. Hobbys do just as well so I will stick with them.

How about a non-wadcutter pellet, BB? The 23 is not a 10-meter target rifle, after all. Once again I turned to RWS, whose relationship with Diana has always made the two a good match.

I shot 5 Superpoint pellets and, while the group was larger than the Hobbys or the R10s, it was dead-center! See? That’s what I was looking for. So I went ahead and finished the group with 5 more shots. What I got was not a small group, but it is exactly where we want it to be and it just looks right to me.

Ten RWS Superpoints went into 1.162-inches at 10 meters. If you just go by the numbers it’s a horrible group, but when you look at it, it doesn’t seem so bad. 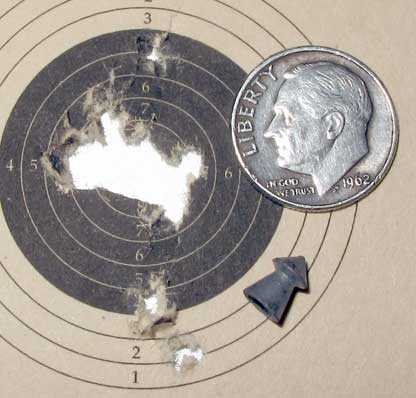 Ten RWS Superpoints went into a 1.162-inch group. The number sounds bad, but the group is right where I want it to be. I think it’s good for a plinker.

The last pellet I tested is the pure-tin H&N Match Green wadcutter. But on the second shot I could see they weren’t going to group, so I only shot 5 pellets. Five made a 1.349-inch group that was the largest group of the test. 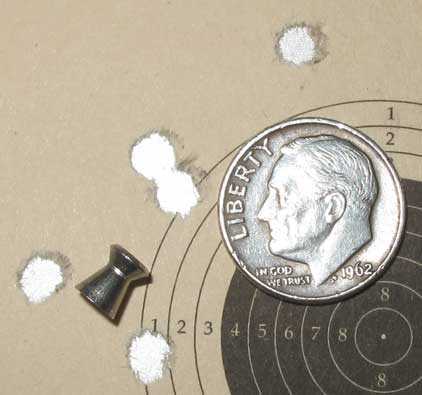 This test brings us to a point that needs discussing. If, after more testing, we find that the Superpoints still hit in the center of the target, but the Hobbys group tighter, do we leave the sights alone and shoot Superpoints or move the sights and shoot Hobbys? I would probably stay with the S-points, but you guys talk amongst yourselves.

Well, I’m quite happy with this little air rifle. It’s small, has a nice trigger and the power is probably where it should be. For once I bought something that didn’t need to be tuned. I didn’t tell you but I paid $75 for this gem, plus something for shipping. I see them offered all the time at $175 and higher and I think that’s a little high. But at this price I couldn’t pass it up.

I’m looking for some oddball airguns to write historical reports on. I would like to purchase these airguns, so at present I’m not looking for loaners. Here is a list of the airguns I am looking for.

I may want to look inside some of these airguns, so I don’t want loaners. I want to own what I get so I can do with it whatever I want. If you or anyone you know has any of these airguns for sale please contact me at blogger@pyramydair.com 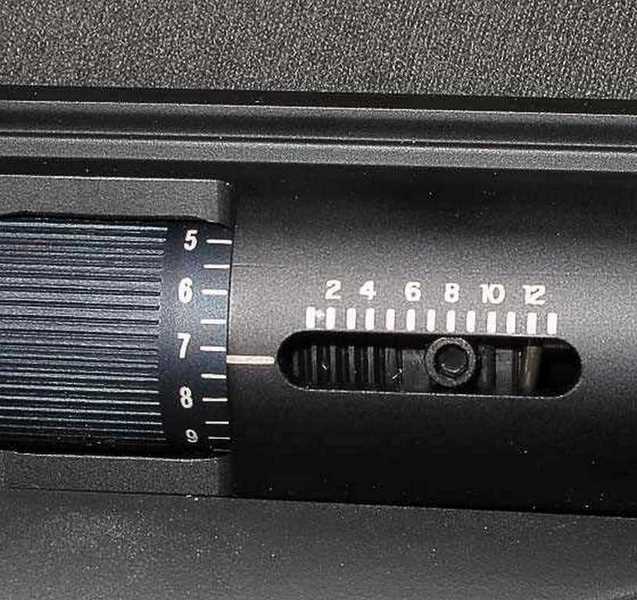