Well, I just can’t put them down! I own four Sharpshooter pistols and one Bulls Eye and I’m finding them so much fun to shoot — now that I have a target that traps all the shot and shows all the hits. And, there is so much more to tell you!

I wrote about the Sharpshooter being the darling of the pistol shooting world. The French especially liked it so much that it was a featured product in World and Olympic champion Leon Johnson’s Paris catalog. Apparently he bought a lot of them because Dr. Bunten of Rawlins Wyoming went to the effort to apply for a French patent! In my research I discovered French markings on one pistol, and also found them on the box! All pistols made at a certain time probably had them, because that particular pistol was sold by a sporting goods store in Pennsylvania in 1942.

One of my Sharpshooter pistols has these marks.

In the 1938 Shooter’s Bible (Stoeger catalog) the entire outfit (gun, loader, tube of shot, stamp pad to make targets and a couple rubber bands) for a plain blue gun sold for $2.00. At the end of the Great Depression that was like $36.57 today. I used an online currency inflation calculator to determine that. You could add a tube of shot a second loader and 6 rubber bands for another $1.60 ($29.25).

A plain nickel gun outfit was $2.20. The Sharpshooter Nickel Deluxe outfit went for $2.75 and the longer Bull Eye pistol was still being sold at $2.50.

The plain blue gun is one whose metal is not polished. It’s just treated with black-oxide as is. A Deluxe Blue pistol has polished metal. Same for the Nickel Steel and Deluxe Nickel pistols.

Dr. Bunten did not go directly from the Bulls Eye pistol to the Sharpshooter. The prototype he made in-between was even better looking, in my opinion. 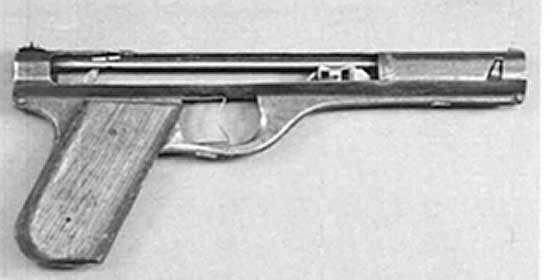 This prototype was an intermediate step between the Bulls Eye pistol and the Sharpshooter.

I expected several readers to note the fact that the Bulls Eye pistol has no trigger guard. What looks like the trigger guard is actually the trigger. It slides straight back and releases the carrier in the same way as the trigger on a Sharpshooter. 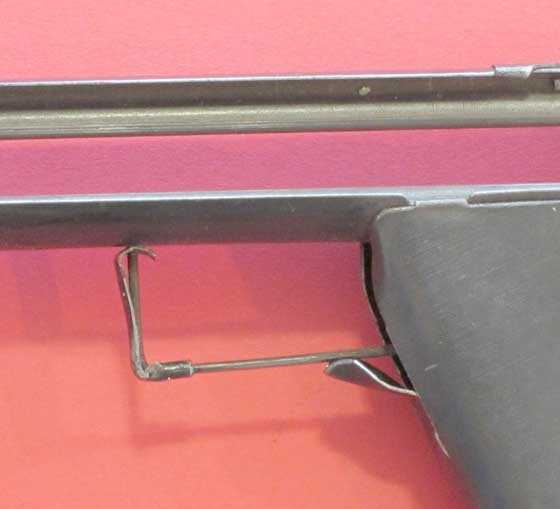 The Bulls Eye trigger looks like a trigger guard. 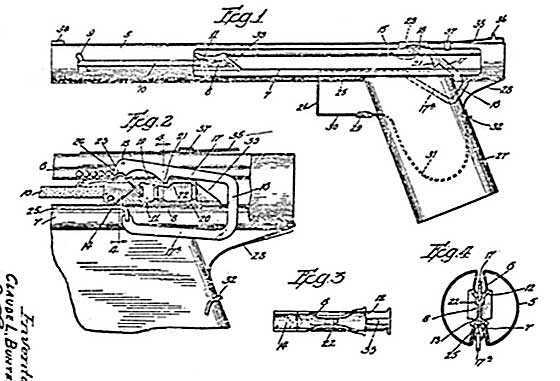 Each Bulls Eye and Sharpshooter pistol came as a kit. In that kit was a stamp pad to make your own targets. In the beginning and up to the end of the La Jolla manufacture, the outfit was a rubber stamp with its own pad in a metal container. Those were the days when people wrote with fountain pens, so liquid ink was easy to obtain. I have a stamp pad that has been used and the rubber pad was fused to the felt ink pad. That came with  my Bulls Eye pistol, and it has scoring numbers for each of the circles.

I also have a pristine pad that was never used. That one has no scoring numbers. When Berry Brow Enterprises took over the company the stamp pad set went away. Customers were given just the rubber pad with instructions to glue a thread spool onto a round piece of plywood and then glue the rubber pad to that. 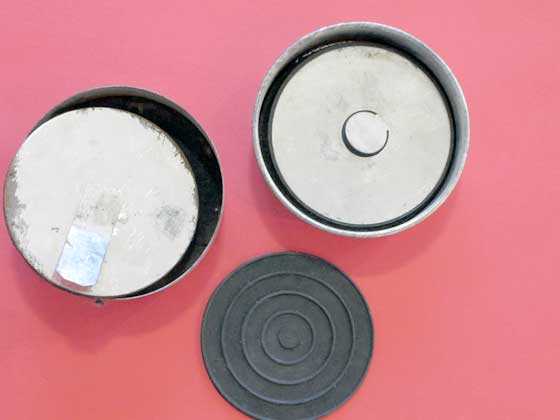 At first the pistols came with complete stamp pad sets to make targets. Later they just gave the rubber pad with instructions for how to complete it.

Besides the pads there were paper Sharpshooter targets. They were folded in half so they would stand on their own and presumably a shot would penetrate the paper. They are numbered but the stamp pads aren’t. 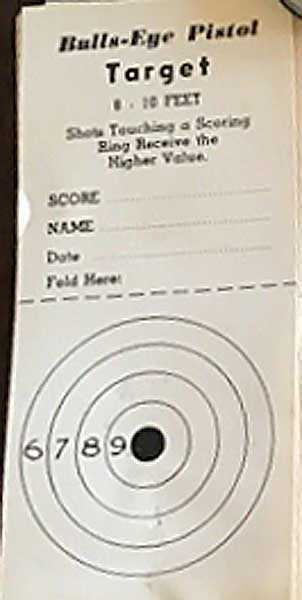 I guess the later guns came with these paper targets. They may not have had a stamp pad included then.

Someone asked how large these guns are. I hope you have a fair idea of the size of a 1911 firearm, because that’s what I used for comparison. The Sharpshooter is 7.5 inches long, overall and the Bulls Eye is 9 inches. 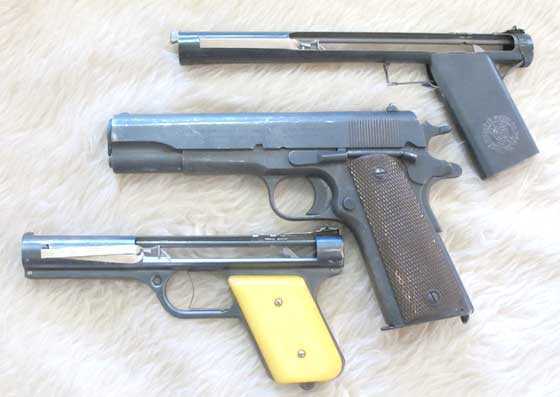 Sharpshooter (below) ands Bulls Eye pistol (above) a 1911 Colt.

I was reading one of the several manuals for my Sharpshooters and noted that I am supposed to be oiling the rails and greasing the rubber band with Vaseline, where it passes through the carrier 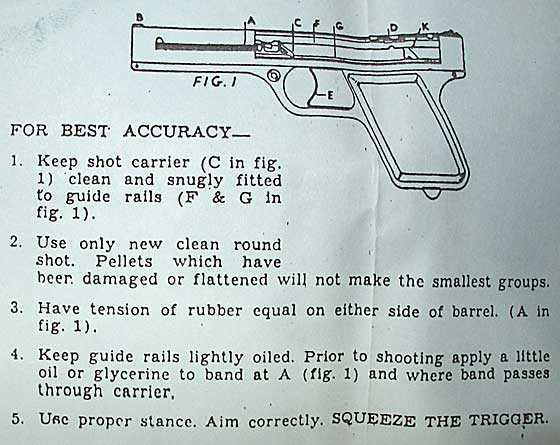 The learning just keeps on coming. Not only is the rear sight adjustable for windage, it also adjusts for elevation! I just discovered this last Friday, when reading the old manuals that are in my pistol boxes! Though I have owned them for 20+ years I never paid much attention to them, but they have stuff that’s important to know. 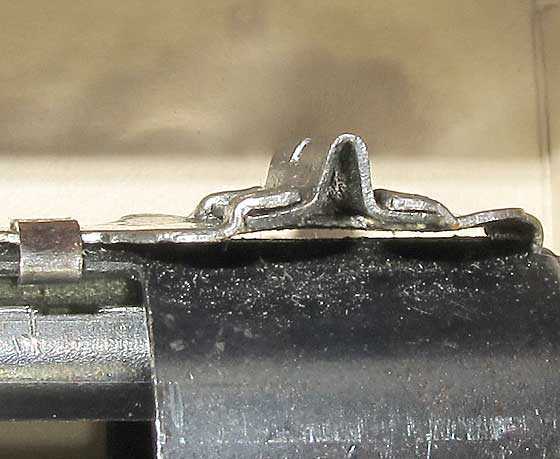 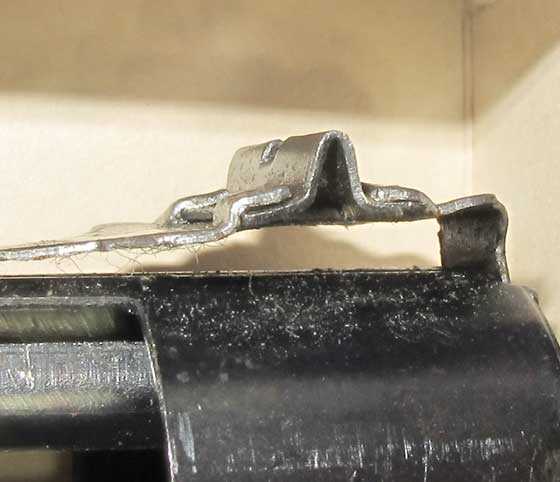 The slider has been slid all the way forward, allowing the rear sight leaf to rise as far as it can.

Shot may be reused

The manual says if you catch the shot in a padded box it may be used over and over and over. When have you ever seen that with any other airgun? Since I don’t have that much shot I am glad for this! I can tell you that my plastic food container (a yogurt container) covered with aluminum foil saves every shot without damage.

There is more! After oiling the rails and the shot pocket in the carrier, plus greasing the rubber band, my pistol was shooting harder. I wonder…

Could the shot now penetrate copier paper? That’s a lot cheaper than aluminum foil and  —YES — IT CAN!

I have now learned so many things about the guns:

Putting all of that to work I now saw improvement in accuracy over several hours of playing around. Let’s see. 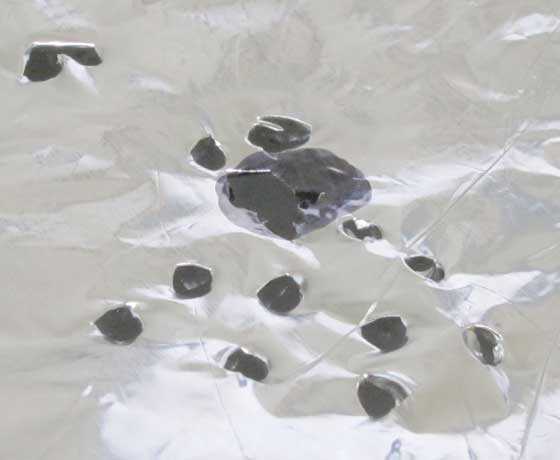 This is the last aluminum foil target I shot. It’s about 25 shots from 8 feet over the course of several hours. 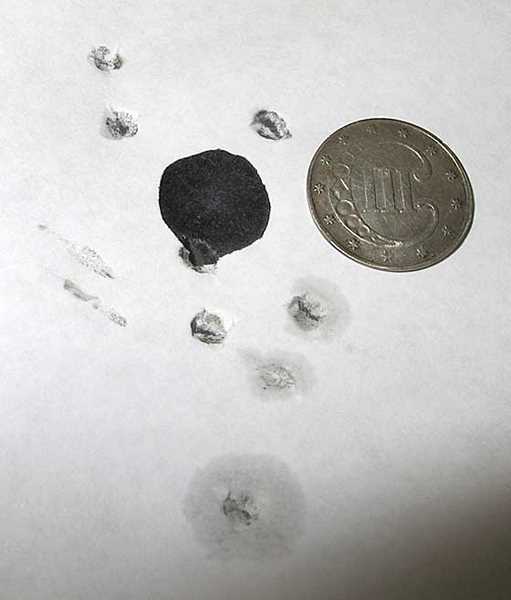 This is the first paper target I shot at. You can see oil around several of the holes. That’s from the oil I put into the carrier shot seat. This target was shot at 8 feet over the course of about an hour and represents eight shots. I told you the black dot was the size of the trime (14mm), but now I see it is closer to the size of the gold dollar (13mm).

I was now shooting just a single pistol, whose adjustments I had been working on. The success of the first paper target prompted me to put up another and give it five shots where I tried my hardest. All shots were fired with the gun in one hand. 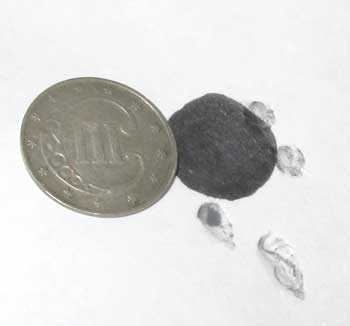 These five shots were me trying to do my best. I shot them at 8 feet in about 5 minutes. This is the first time I have seen the kind of accuracy that is claimed for the pistol!

I know you are waiting to learn the velocity of the gun. It isn’t much, that’s for sure. I’m not going to test it today, but from my previous tests in 2018 I got up to 136 f.p.s. when I used three rubber bands. Back then I lubricated the rails with moly powder because I thought oil on the rails would slow the carrier down. I hadn’t read the manual yet! And we still don’t know what oiling them does.

But there is more. In his article in Airgun Revue 2 Dean Fletcher reported a velocity of 158 f.p.s. when he used 5 rubber bands on a Sharpshooter. And the technical editor of American Rifleman recorded a top velocity of 165 f.p.s. from a Sharpshooter. So, that’s about the best we will see. If you read the book, Man-Powered Weapons and Ammunition by Richard Middleton, you will learn that there is an upper velocity limit to any catapult that’s based on the spring rate of whatever propels it. I don’t know this but I wonder if the real David-type sling — a centrifugal weapon, can be even faster than a mechanical one?

I think the Bulls Eye pistol will be a little faster than the Sharpshooter because the bands are stretched farther. We shall see!

So that’s a quick look at what I know about the velocity of these pistols. I hope that satisfies you until I get to velocity testing.

That’s it for today, but what a report this has been! I finally had the time to just play with these Sharpshooter pistols and learn some of their secrets! And I wrote them down so others don’t have the steep learning curve that I went through.