Oh, boy, has the Benjamin Semiautomatic PCP rifle been anticipated! Ever since Crosman showed it at the 2020 SHOT Show people have been clamoring for it.

What IS a semiauto Marauder (SAM)?

First, let’s understand what a semiauto Marauder ISN’T. It isn’t a Benjamin Marauder that has been converted to shoot semiautomatically. That would be next to impossible to do. The Marauder is a bolt action rifle and there is no way that action can easily be converted to semiautomatic operation, any more than an AirForce TalonSS can easily have a magazine added. So, stop thinking of this as a Marauder and think of it as a semiautomatic Benjamin PCP — a SAM. If you can do that you will stop comparing it to a Marauder in your mind and a lot of the heartache from the differences  will disappear.

What this is, is a 10-shot semiautomatic precharged pneumatic air rifle. It comes in .22 caliber only at present and in a wood stock. If the design catches on there will no doubt be upgrades yet to come.

The SAM comes to you factory preset at around 22 foot-pounds. At that setting Crosman says you will get around 50-60 shots. You can adjust the hammer spring tension up to the point that about 28 foot-pounds are available. That will drop the shot count to about 30-40 shots, according to Crosman. You know that will be one of the things I will test.

The rifle is medium weight at 8 pounds without a scope. It’s not heavy, but the thickness of the stock conveys the impression that it’s heavier than that.

The stock appears very Chinese to me. It has a muddy reddish brown finish with slick flat impressed diamonds along the forearm and nothing at the grip. This is where some stippling would help a lot, because with the weight of the rifle the stock needs to be grippy.

The SAM has a regulator, which means you should get more shots at consistent velocity than if it didn’t. Naturally we will see how that goes.

The semiautomatic capability means that follow-on shots come more quickly. I’m thinking of a way to test this. I might do it while testing accuracy.

The Monte Carlo cheek piece adjusts up and down to suit your needs. Since a scope has to be used, this feature allows the shooter to set up his rifle to suit himself. And the stock is ambidextrous. The cheekpiece is made of synthetic material instead of wood.

Now let’s look at some things that set the SAM apart from the bolt-action Marauder.

Shooters who have heard praise for the Marauder trigger for years will decide to buy one of these semiautomatics, never thinking that this isn’t the same rifle. They will be surprised when they feel this trigger. Some of them will have owned Marauders before and they bought this airgun just because it is semiautomatic. Others will never have experienced a Marauder trigger, but they have heard a lot about it. This one will be their first encounter. Both situations will not go well.

Let me enlighten you. The M1911 pistol and its derivatives were designed as semiautomatics from the get-go in 1911. Their triggers used to be (from 1911 to around 1970) pretty bad when compared to good target handgun triggers. They could always be improved by gunsmithing, but that work often cost nearly as much as the pistol cost. I did that work when I was first in the Army to make some extra money.

These days the century-old 1911 design has been around so long that a factory can put on a pretty good trigger by just assembling manufactured parts. If that isn’t good enough, expect to pay several hundred dollars to make it better. My CZ75 Shadow2 has a decent trigger, but a good trigger costs another $450, plus transportation both ways! So, just improving the trigger on a 1911 or a CZ75 costs as much as a bolt-action Marauder!

Most AR-15s come with a fairly horrible trigger. But that design is now a half-century old and makers have discovered how to make the trigger better, if not good. My Gisselle aftermarket trigger cost me $280 and took about 8 hours to fit and adjust. So a semiauto can have a good trigger, but there  ain’t no way you’re gonna get a Marauder-level trigger in a regulated semiautomatic pellet rifle for a few hundred dollars over the base Marauder price — even if the rifle’s name has the word Marauder in it.

Here is “problem” number 2. The SAM mag. looks like a Marauder magazine but it doesn’t load in the same way. It loads like many other PCP magazines, though. It seems the people who have received their new Semiautomatic Marauder rifles are not used to a circular magazine that requires the first pellet to be loaded backwards from the bottom of the mag. Once that first pellet is loaded the rotary wheel inside is stopped and the rest of the pellets are loaded through the transparent top, just like a Marauder magazine. 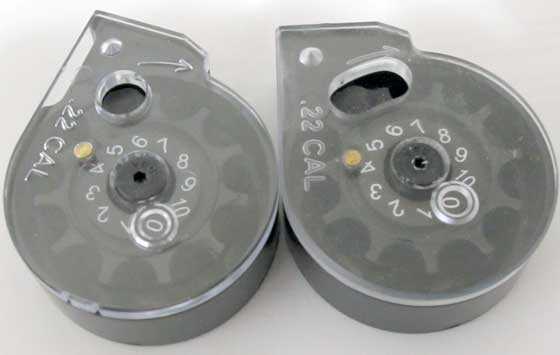 The SAM magazine is on the left and a Marauder mag is on the right. See any difference?

Nearly every new owner says that the Semiautomatic Marauder is too heavy. Well — it isn’t. It just has a wooden stock and is heavier than if it had a synthetic stock. If it had one of those, though, that would be the complaint. The SAM weighs 8 pounds, nominally.

One valid negative observation is that the charging handle that retracts the bolt probe and hammer doesn’t stay back on its own. If you release it to insert the magazine the bolt probe springs forward and gets in the way. Because of that it almost takes three hands to load a magazine into the receiver!

The bottom line of the Semiautomatic Marauder seems to be to get your thinking oriented correctly. This is a different PCP altogether from the Benjamin Marauder. That doesn’t mean anything, good or bad. I will test it and tell you what I see.