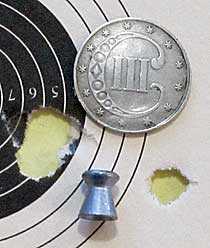 Today we look at the accuracy of the El Gamo David breakbarrel. This little rifle seems to have captured a lot of people’s hearts for some reason. Let’s see if he can do the job.

There is a lot to tell in this section. I shot at 10 meters off a sandbag rest. I discovered in Part 3 that the David likes his pellets seated deep, so that’s what I did today. I used a ballpoint pen to seat every pellet in this test.

I didn’t know whether an artillery hold was best or if I should just rest the rifle directly on the bag. So I devised a way to find out. I’ll talk about it in a minute.

I shot 10-shot groups, except for my first two tests. Let’s get started!

This is the test I thought up to see which method of holding was best. Before shooting the groups of 10, I shot five pellets with the rifle rested directly on the bag and another five holding it with the artillery hold. The first pellet I shot was the 8.2-grain RWS Meisterkugeln Rifle. The very first shot hit the paper to the right of the bullseye, at 4 o’clock. So I adjusted the rear sight to the left. It only went a short distance, but it’s now as far to the left as it will go.

Then I shot a group of five pellets. Regardless of where they land, they are as far to the left as I can make them. When I looked at the group through the spotting scope I was amazed to see a one-hole group. Later, when I measured it, the distance between the centers of the five pellets is 0.166-inches! That is worthy of a trime!

The first shot hit low and to the right. After adjusting the rear sight as far as it would go to the left I put 5 RWS Meisterkugeln Rifle pellets into a 0.166-inch group at ten meters.

Now it was time to see what the artillery hold would do. However, since the David is so light it is very hard to shoot it with a good artillery hold. The trigger pull is heavier than the rifle!

With the best artillery hold I could muster the David put another 5 Meisterkugeln Rifle pellets into a 0.637-inch group at 10 meters. This is actually a 6-shot group, as the 5 shots looked like just 4 through the spotting scope, so I shot a 6th pellet. And it went into the same hole the 5th shot went into. The David wants to shoot! 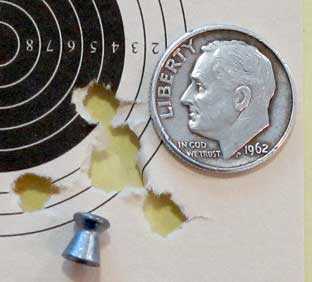 The David put 6 Meisterkugeln Rifle pellets into 0.637-inches with shots 5 and six going through the same hole as another pellet.

Obviously the David prefers to be rested on a bag as it shoots, so that’s the way I shot it for the rest of today’s test.

Now that the question of the right hold was answered I decided to shoot 10-shots groups for the remainder of the test. I began with the same Meisterkugeln Rifle wadcutters I had been shooting. Unfortunately the sun picked that time to shine brightly through the window into my eyes and it probably distracted me. Ten Meisters went into 0.85-inches at 10 meters. 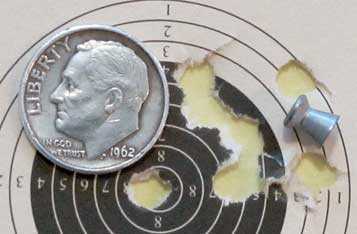 The David put 10 Meisterkugeln Rifle pellets into this 0.85-inch group at 10 meters.

Notice that this group is not only big, it is also in a different place than the first two groups! It’s much higher on the target. I also have to note that the David jolts when firing this pellet.

The next pellet I shot was the 7.33-grain Air Arms Falcon dome. If you recall, this pellet shot very smoothly in the David in Part 3.  I expected it to do well in this test, and, as far as accuracy goes, it did. Ten Falcon domes went into 0.567-inches at 10 meters. Now, that’s a group I can live with! 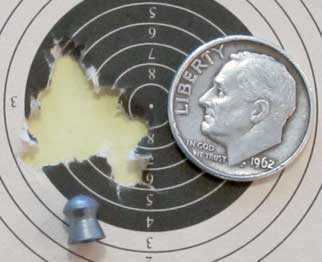 I expected Falcons to shoot smoothly, but they didn’t. They jolted just like the Meisters. Today I was shooting the rifle off a bag rest, where in the velocity test I was holding it in my hands.

The sun was no longer shining in my eyes when this group was fired. And I note that the center of the group is to the left of center in the bull, so the rear sight can be adjusted back a little. This is a good pellet for the David, as is the Meisterkugeln Rifle, I think.

The last pellet I tested this day was the H&N Finale Match Light wadcutter. At 10 meters ten of them made a group that measures 0.804-inches between centers. The group looks okay except for the straggler pellet off to the right. The other nine pellets are in 0.648-inches. That’s still on the large side so I think I would stick with the first two pellets for the David. 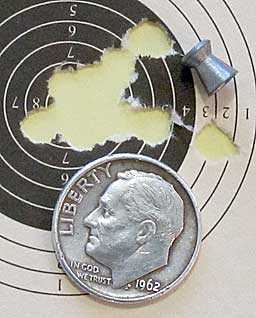 This test has taught me a couple things about the David. First, it’s very accurate. This is an air rifle that’s worth the time to make it shoot smooth and to lighten the trigger.

Next, the David wants its pellets seated deep. And it wants to be rested directly on a sandbag when it shoots.

Finally, as accurate as the David is, I don’t think the heavy trigger helps it. And the jolt it gives when firing is annoying, as well. The David could stand to be stripped and tuned.

We’re not done with the David. I want to pull it apart next and see if I can get it shooting smoother. That trigger also needs to be lighter. You may not see this rifle again for awhile, but I will come back to it.