The AV-46M target air pistol is a reincarnation of the IZH 46M for the American market.

It’s accuracy day for the Air Venturi 46M single stroke pneumatic target pistol. A day I think that will be the first of several.

I shot off a rest from 10 meters. I started with the gun rested directly on the bag and held with two hands, but during the test I discovered a better way to hold the pistol. I will describe it when we get to it.

I shot 5-shot groups so I could test more pellets. That turned out to be a good idea with all the shooting I did.

I said in Part 2 that I would be changing the sights for this test, but when the pistol was extended far from my eyes the sights it came with are sized correctly. I will say, though, that the screws that hold the rear sight blade to the unit are left-hand threads — just like those on the IZH-46M.

The pistol was shooting high and to the right when I started. I adjusted the rear sight as far to the left as it would go, but the pellets still hit the bull too far to the right. However, these pistols have a number of secondary adjustments, so I stopped to examine the pistol.

It appeared that the front sight might have been installed one or two degrees to the left of center. I say it appeared that way, because it was not obvious. There is a single slotted screw under the front sight. Loosen it and rotate the sight unit in the desired direction. I rotated the sight ever-so-slightly to the right (front sight moves in the reverse of how you want the pellet to move) and tightened the screw. I could not detect the difference in angle visually, but the problem was solved. 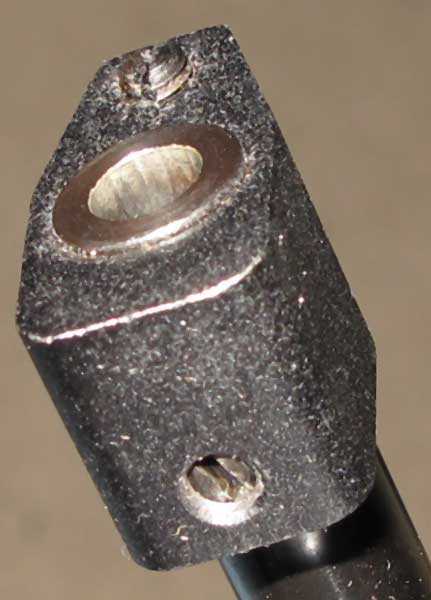 Loosen that screw under the front sight assembly to move the sight blade.

As I shot the pellets today I didn’t worry about centering them on the bull. That will come later, when an accurate pellet has been selected.

I shot many more groups than I’m going to show you here. Some had called pulls that I will explain as we go, and others were just not the right pellets for this pistol. It took me the entire test to discover that this pistol probably wants to shoot a 4.49 mm or a 4.50 mm wadcutter. I’m not certain of that, but the results seem to indicate it. That’s more of a note to me than to you, but owners will want to pay attention.

As a result of shooting so much today (60-70 shots) I got tired. Toward the end of the test when I discovered the best hold, I was no longer shooting at my best.

The first group I will show is one I shot with RWS R10 Match Pistol wadcutters. Five pellets landed in 0.605-inches at 10 meters with 4 of them in 0.326-inches. That turns out to be a theme in today’s test — three or 4 pellets in a nice tight group with one or two that went wide. 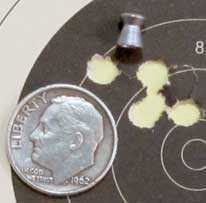 The only domed pellet I tried today was the Air Arms Falcon. The AV-46M put five of them in 0.455-inches at 10 meters. 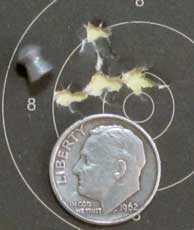 Five Air Arms Falcon pellets went into 0.455-inches at 10 meters. The group looks smaller than it is because it was shot with domed pellets.

New method of resting the pistol

At this time in the test I tried a new method of resting the pistol. I had been holding it with two hands as it rested on the sandbag, but now I stretched out my shooting hand and just used that with the pistol still resting on the bag. That put the sights farther from my eyes which gave a sharper sight picture. The pistol was dead steady on the bag. I used this hold for the remainder of the test.

Sometimes this Qiang Yuan Training pellet does very well and this is one such time. I shot five into 0.679-inches, but the lone pellet on the left was a called pull. Now let me explain what I mean by that. When the trigger is as nice as the one on this pistol, you aren’t going to pull it by mistake. The “pull” in this case was that the gun fired when I could see slightly more light on the right side of the front post than on the left side. I didn’t want to fire at that moment, but the trigger was ready to go. That happens during matches all the time and the trick is to prevent it from happening to the best of your ability.

The other 4 pellets landed in a group that measures 0.285-inches between centers. This is a pellet to watch! 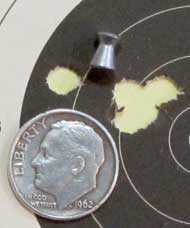 Next to be tried were RWS Meisterkugeln Rifle pellets. Once again four landed in a tight group and a fifth hit outside — this time lower. Four are in 0.381-inches and five are in 0.647-inches. This was not a called pull. 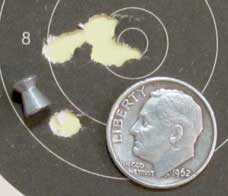 The last pellet I will show you is the Vogel target pellet with a 4.50 mm head. Five went into 0.65-inches, which isn’t that great compared to the other pellets — but three of the pellets are in 0.20-inches. That’s trime territory! I tested this pellet twice and got the same three-shot group inside of 5 shots. That told me that this is a pellet to consider and also that I was tiring out. 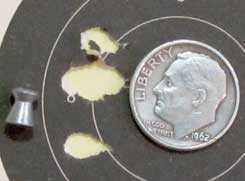 The trigger on an airgun is revealed during accuracy testing, and the one on the pistol I’m testing is gorgeous! There is no creep in stage two — something every IZH-46 I’ve ever shot cannot say. It also adjusts easily and stays where it is put. This is a trigger to admire.

Other pellets I tested but have not shown in this report are JSB Match S100 with 4.52 mm heads, H&N Finale Match Heavy with 4.50 mm heads and H&N Match Green with 4.50 mm heads. Their groups were just too large to consider.

I’m not done testing this pistol. I shot it so much today that I got tired and didn’t give the pistol a good chance to shine, once I figured out how best to hold it.

Why can’t I shoot better ?