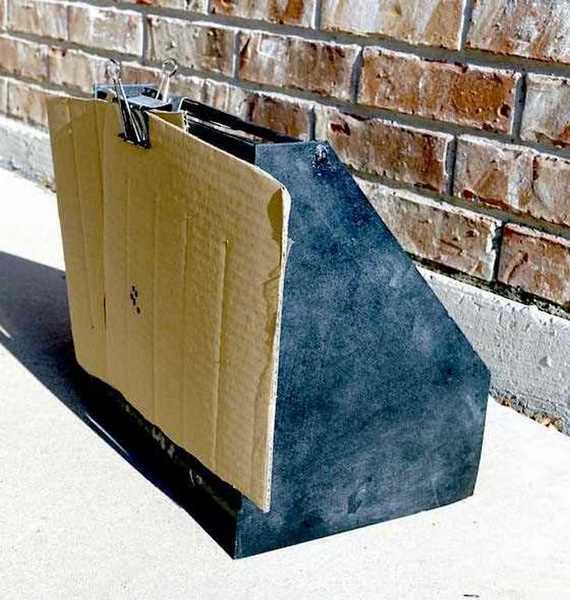 Every airgunner needs a pellet trap — period. If you shoot indoors like I do, a trap is so essential that I just ordered my second one. My first one I have owned for 28 years and it has withstood almost a million shots, including shots from big bore airguns that approached 200 foot-pounds and lots of .22 rimfire rounds.

If you only shoot outdoors, here are a couple things that substitute for a trap.

Let’s talk about both of those.

Packed earth is the best way to stop bullets and pellets. It has been used for centuries and rifle ranges that are constructed today still use it. However, it has to be packed earth!

The M1 Carbine remains one of the most aggressive firearm development and production programs mankind has ever undertaken. Over six million carbines were produced in just 38 months during World War II, when severe rationing was in place.

One of the ten prime contractors, Standard Products, had an indoor test range in their factory to test the functioning of the completed firearms. Remember — they were producing hundreds of carbines each day!

Their bullet trap was constructed of 10 feet of wet sand that was backed by a concrete wall.  I’m sure they felt it was overkill for stopping a carbine bullet. However, soon after the range was opened, a night watchman outdoors saw bullets exiting the wall of the building and ricocheting off a fence outside, next to the street. He went inside and stopped a group of enthusiastic Standard Products employees shooting carbines after hours. When they investigated, they discovered it had only taken a relatively small number of shots to eat through the ten feet of wet sand and then through the concrete wall behind it. Shots that hit in the same place repeatedly can eat through many materials, regardless of their thickness, and when shooting at a target you tend to hit in the same place.

An earth berm, in contrast, is constructed outdoors of packed earth. If it rains the earth gets wet. But no artificial plan of wetting it is needed. I say packed earth because if the dirt is just piled up in a heap, it won’t stop bullets well. My gun range has a new berm that we had to stop using because the bullets ate through it in one year. Every several years the other berms have to have more dirt piled on them and then packed down by a front-loader.

The other great outdoor bullet trap is distance. In Las Vegas there is a rifle range that is good for everything up to and including the .50 caliber  Browning machine gun (BMG). That’s because there is nothing for 20 miles behind the targets that are placed out to 1,000 yards and even farther. There are no roads, trails or any human habitation.

In Germany, where land is at a premium, there is a tank range called Grafenwoehr that is roughly shaped like a huge cough drop, though all the dimensions are in kilometers. In the 1930s the Nazis evicted thousands of people from some 35 villages to expand a small artillery base into the monster it has become. And the ranges all shoot from the perimeter in toward the center. At Grafenwoehr the huge distances are combined with selected earth berms, to include one hill that’s large enough to be classified as a mountain. That’s for stopping the long rod penetrator from a tank sabot round.

But you don’t have miles ands miles of nothing in your back yard. In fact, you have neighbors. Or you shoot inside the house and there are no earth berms there. What do you do then?

You get a .22 bullet trap — that’s what you do! Yes you can make all sorts of traps to stop pellets and I have even written several reports about that very thing, but bottom line, a .22 bullet trap is your very best bet. Like I said, mine is more than 20 years old with half a million pellets and bullets and it’s still in great shape.

Why am I telling you this? Most of you know it already, though some are still struggling with boxes filled with rags and old phone books (that are getting increasingly hard to find!). Let me tell you a little story.

Next week I will be writing Part 5 about reloading .22 rimfire cartridges. And I had to test the results of my work, which will be in Part 6. I have a silent pellet trap in my office that I have used for 12 years when I test velocity, but I would now potentially be shooting it with 100+ foot-pound projectiles, and was my little pellet trap really up to it? I thought not, so I dragged my heavy steel .22 bullet trap from the garage into my office and while doing that I wondered whether a second bullet trap was something I might use.

I went on the Pyramyd Air website and looked at their bullet traps. Wow! The Champion Heavy Duty Metal Trap that is identical to my obsolete Outers bullet trap now sells for $76. And used Outers traps on eBay sell for $100 and up. I remember balking at paying $48 back in 1993 for my trap when I started The Airgun Letter. Ouch! Well, the times have changed and things cost more in 2021 than they did in 1993, which was 28 years ago. Has it been that long? Be careful, or I will break into strains of, Sunrise, Sunset from Fiddler on the Roof.

Well, I did want the additional trap to make things more convenient, so I looked at the customer reviews for the Champion trap. There were 102 of them. When I read the reviews I like to read the worst reviews first, and I look for common complaints. When I look at the great reviews I’ll be watching for kinder comments that support those complaints. Here is what I saw as the chef complaint for the Champion trap. It is from the only 3-star review, which was the lowest.

“The pellets bounce back out of the trap.”

That was it. One complaint. Well, duhh! Every bullet trap that doesn’t cost a fortune has that problem. Sure you can buy a snail trap from Savage (go to Savage range systems) for as little as $590.00 and not have that problem. Or the Bullet Bunker for plinkers is a rubber trap for .22 rimfires that only costs $764.00. Pardon me but when I pay that kind of money I want to get a new stove or a water heater — not a pellet trap!

I have been cleaning up lead dust and shattered pellets from in front of my Outers metal bullet trap for 28 years because I was too stupid to know that some fraction of the pellets and bullets aren’t supposed to bounce back out. Why didn’t “they” design it right?

Oh, there was one other complaint from someone who gave it 4 stars. I’ll let him tell you what it is.

“Stand back if you’re going to use this for BB guns. Mine hasn’t trapped a single BB yet. I shoot my CO2 BB pistol from 15 feet, and I have had BBs sail back past me. So far every BB I have fired at it are somewhere on my basement floor. I’m going to try placing shims under the back of the trap to see if I can find an angle that will work better for the BBs. They don’t come out with enough force to be dangerous, for the most part, so I still recommend this to the indoor shooters out there.”

Does anybody read this blog anymore? How many times have I told you to NEVER shoot steel BBs into a bullet trap (please, Siraniko — this is not a test.)? We call the Champion a pellet trap because Pyramyd Air sells pellet guns, but in truth it was made to stop .22 rimfire bullets and Pyramyd Air doesn’t even call it a pellet trap on their website. It’s a bullet trap that works well for pellets. But it ain’t no BB trap!

Today’s report is not about BB traps. If that is what you want here is a blog that tells how to make one. If you would rather buy one, I recommend the Air Venturi Quiet Pellet Trap with a steel backstop. You will be buying the same thing that I show you how to build in the other report. There is a Quiet Pellet Trap for ten dollars less that has no steel backstop, but I prefer the insurance of the steel. I have a hole in my office closet door that was put there by a 30 foot-pound pellet rifle that shot pellets in the same place ten times and blasted through a 2-inch layer of Impact Putty and then a cookie sheet backstop. Get the steel! I retired that pellet trap and went to a much stronger one that has thick steel plates inside — see Stop that pellet! But when shooting .22 long rifle rounds I wanted a wider trap to preclude any small aiming errors. So I used the steep bullet trap and decided to switch to it for everything except BBs.

Buy once, enjoy for a lifetime

Stuff like a bullet trap isn’t at the center of what we do. We want to see the latest pellet rifle or perhaps some vintage BB gun. We will sometimes tolerate an accessory like a scope, a chronograph or a dot sight. Well, bullet traps are like washing machines. You don’t sit and stare at them for hours like a flat screen TV, but when you need them that TV will not suffice. When was the last time you proudly showed off your hot water heater to your best friend? But I bet you like a hot shower!

130 thoughts on “Pellet and bullet traps”