Today we have another guest blog by reader Ian McKee who we call 45Bravo. He shows us how to reseal a Crosman 38T revolver. The revolver he reseals is the same .22 that I am about to test for you and also the same gun whose grips he fixed for us, so I linked to all the previous Crosman 38T links, because this is a large series.

The 38T is a vintage all-metal (except the grips, rear sight, and the rotating pellet cylinder) CO2 replica revolver that closely mirrors the lines and grip of a 1980’s Smith & Wesson revolver.

In the firearm world, most revolvers are considered a simple design, and they do have relatively few parts.  But when you make a airgun replica of a firearm, you have to work within the envelope (profile and dimensions) of the original.

That means you have to get creative with your engineering and layout as to where you can place your necessary components such as the CO2 cartridge, the valve, and the way to feed the intended projectiles. Typically, on a piece-by-piece count, an airgun will have more internal parts than its firearm twin. Today we look at such an animal.

I apologize in advance that it is a long blog, but there are a lot of steps to cover.

TIP:  I would suggest leaving a cartridge in the gun, but not pressed into the CO2 face seal. Just tight enough to hold the grip in place.  You sometimes see these pistols listed for sale without the left grip as it has become lost over the years.

These grips are thin, and tend to break and crack around the alignment pins and also where the CO2 clip is attached. The gun I’m resealing had those issues, and the repair has been covered in the GRIPS & TIPS BLOG. 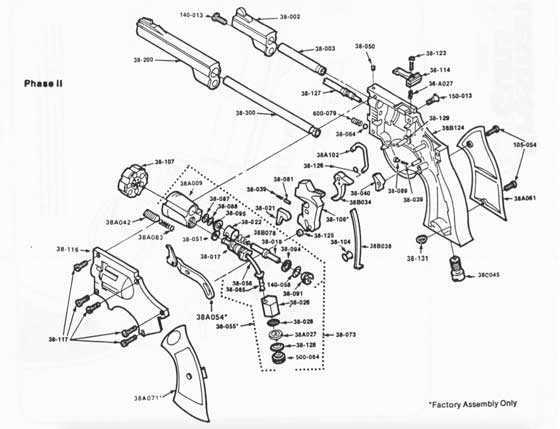 Included with this blog, are a few different exploded views of the pistol, please use them to guide you in removing the parts, which I will list as we go.

The above parts diagram is for a Phase II gun, which is what I am working on, so the part numbers will match. There are a few differences in this gun from a Phase I gun, but the differences are minor. I will include a Phase 1 parts diagram at the end of the blog for those that have the earlier gun. I believe the Phase 3 guns will have the same parts as the Phase 2 guns.

Remove the outer barrel shroud by removing the single screw that is under the barrel in the end of ejector shroud (140-013), then with a slight wiggle, slide the outer shroud off of the barrel.

There are 5 screws on the left side of the gun, that hold the cover in place. They are all the same length, and it does not matter which hole they go into when the gun is assembled.

Slowly lift the left side cover, there is only 1 spring that will want to pop out (38A083), and it is the spring that pushes the sliding loading gate into its forward position.  The spring is relatively weak, and not under much tension. 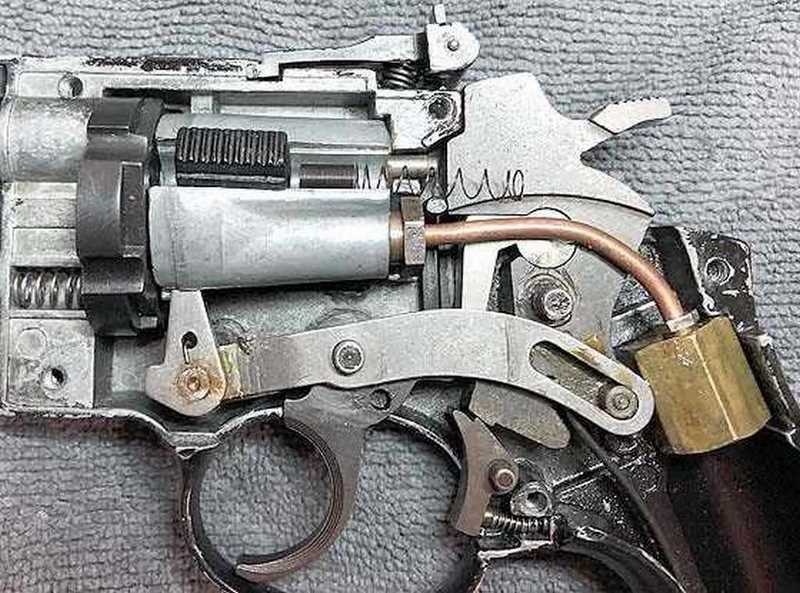 Here are your thousand words.

Remove the hammer spring (38-B038). It is a long flat spring that goes from the bottom of the grip to the hammer. Use needle-nosed pliers to remove this spring by lifting the bottom straight up out of its resting place. It is not under much tension.

Depending on which phase your pistol is, there MAY be a small ball detent that is under the rear sight elevation screw, be careful not to lose it if yours has one. You may remove the rear sight and spring now, but it is not necessary for the reseal, or you may cover it with masking tape to hold it in place while working on the gun — your choice.

You will see a large flat lever assembly (38A054) that goes from the trigger to the front of the gun. On the right side is a small roller (38-125) that is in a raceway, remove this roller.

Congratulations! You have now removed all of the springy bits that are likely to take flight easily.

Place your hand over the exposed components, turn the revolver over and remove the valve body screw (150-013) from the false “cylinder” on the right side of the gun.

Turn the gun back over, unscrew the base pin (38-127) on which the cylinder rotates.

The lever assembly (38A054) is factory assembled with special jigs to assure proper timing and should not be disassembled.

Now for the reason we are here. This airgun leaks and we need to stop that foolishness. 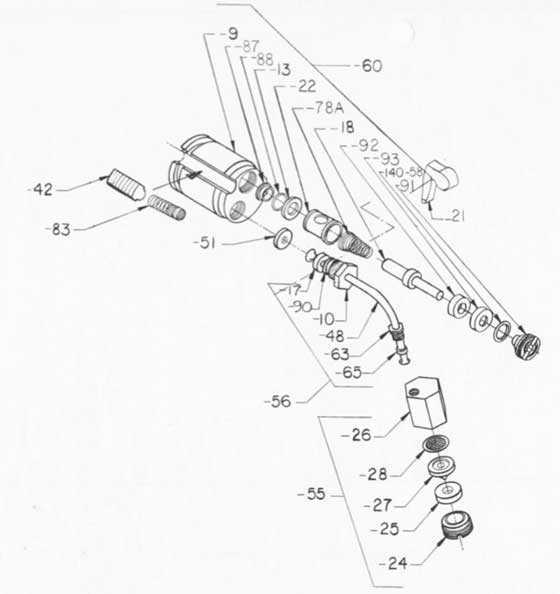 The diagram shows the valve is broken down in 3 sub-assemblies, 55 (the piercing assembly), 56 (the tube assembly), and 60 (the valve assembly).

TIP: The factory service manual says not to separate the 3 assemblies unless absolutely necessary, but since you will be replacing a seal on each end of the tube, you have to separate them.  It is also better to take them apart so you do not inadvertently bend the tube.

(I tried it their way first, and DID accidentally bend the tube, and had to correct that problem when putting it back together).

Using 2 small adjustable wrenches, unscrew the copper connector tube and piercing assembly from the valve body, being careful not to bend or break the tube assembly.

A small metal washer (part 51 in the diagram) may come out with the tube assembly, but that is ok, just make sure it goes back in first.

The seal kit Tom ordered for this pistol came with all the parts necessary to reseal the pistol including a small bottle of lubricant I will call Pellgunoil.  It is a very complete kit, and the seals are very good quality compared to others that are sold online. 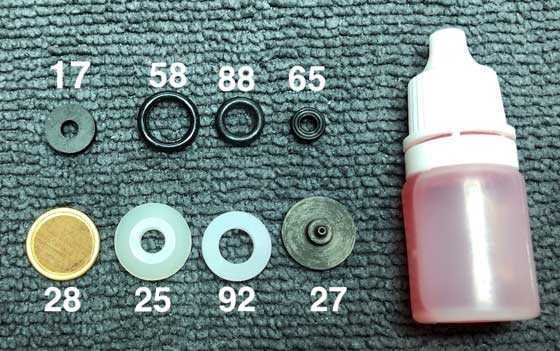 I have labeled the parts to match the part numbers shown in the diagram.

Clean the assembly with alcohol and a Q-tip. Using the new parts from the reseal kit, lubricate them with the Pellgunoil, or your choice of lube, and reassemble in reverse order and set aside.

Remove the old small seal (part 65) and lube the new seal and carefully put it over the flared end of the copper tube.

Remove the old larger seal, (part 17) and lube the new one and carefully put it onto the other end of the tube. Set it aside.

Using a spanner wrench, or needle nosed pliers, or a wide blade screwdriver modified for this purpose, remove valve seat (91), being careful to keep finger or thumb pressure on as it is under spring tension.

Pay special attention to the parts orientation as they come out.

Clean the assembly with alcohol, let it dry, and then lube the parts as you reassemble.

Lay the cylinder (part 9) large end down on a rag or towel, lube the parts with the Pellgunoil as you assemble them.

The o-ring (part 88) goes in first, valve washer (part 13) goes in with the small lip down toward the o-ring, and the flat side up toward the valve spring.

The valve spring (78A) is tapered, and the large end goes in first.

Being careful not to cross-thread the top valve seat (91), tighten until contact is made with the valve washer. Then tighten 1/8 – 1/4 turn more. This will squeeze the o-ring a little to make it seal against the valve body.

Now we are ready to put it all back together.

Wherever there is metal-to-metal contact, lube lightly with moly lube or your choice of lubricant.

TIP: The key word is LIGHTLY, since the speed the hammer falls does have a direct effect on the velocity, and excess lube could slow the hammer fall.

Insert the flat hammer spring (38B038) into the lower part of the frame, and into the hammer.

The trigger spring goes over the trigger pin, the short leg sits on top of the trigger, the long leg rest on the lower part of the frame as shown in the photo. 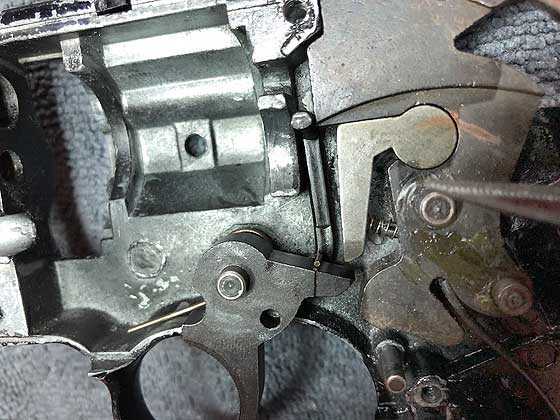 Carefully screw the tube bushing into the piercing block, taking care not to damage the new seal. But do not tighten it yet.

Insert the metal washer 51 into the valve, and screw the other end of the tube assembly into the valve taking care not to damage that new seal. Again, do not tighten this end yet either. 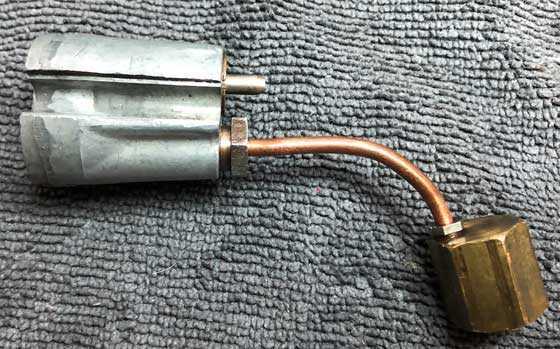 As one complete unit, install the cylinder (38-107) (the plastic part that holds the pellets), the valve group (38-073) (the valve, tube and piercing block, and the lever assembly (38A054) (the long silver bar with the spring loaded hook on one end.)

NOTE: the piercing block fits into a matching recess on the right side of the frame, the gas tube should be in the position farthest from the hammer.

Carefully holding everything in position with the palm of your hand, install the valve body screw (150-013) that holds the valve to the right side of the frame.

Check that the gas tube is not rubbing on the hammer, and then tighten both ends of the gas tube. Check the clearance again.

As it sits, the springy things should not want to fly out.

Double check the bushing on the hammer/lever assembly is in place, the cylinder ball detent and spring are in place, and the sear spring/plunger are in place as indicated by the arrows in the photo below. 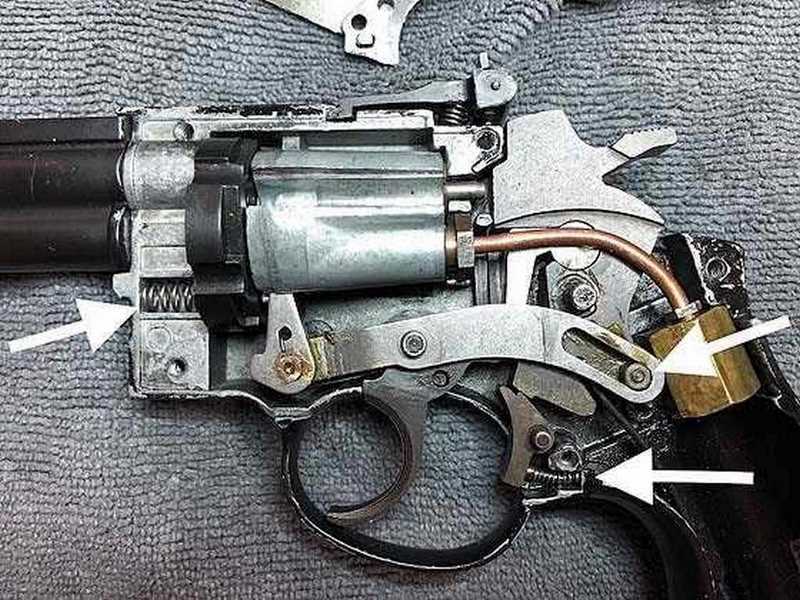 The springs have been installed (arrows).

Place the pellet loader (part# 38-42) in the loading tray of the main valve body with the rounded or tapered end toward the pellet cylinder.

We will install the loader spring after the side cover is installed.

Install the side cover with the 5 screws, they are all the same, so it does not matter where they go.

Double check the trigger and hammer function in both single action and double action to ensure there is no binding.

At this stage of assembly, if it is binding, the tube is probably rubbing on the hammer, or you forgot to tighten the valve body screw on the right side of the gun (part# 150-013).

The barrel and shroud

Install the spring (38A083) for the pellet loader in the grove with the end that is tightly coiled toward the back of the gun, and using tweezers or a similar tool, put the front of the spring under the rear of the loader.

Install the right grip panel with the 2 screws.

Hopefully, you have no leftover parts.

Now you can function test the gun again, checking that everything moves freely. Install a fresh CO2 cartridge, and check for leaks.

Here is the Phase 1 parts diagram I promised. 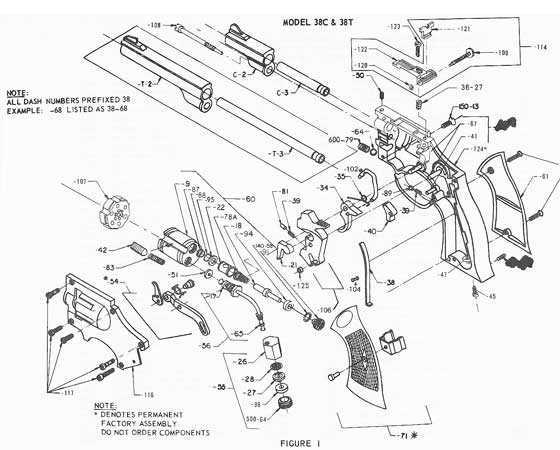 ONE FINAL TIP: The manual suggests using a coin to tighten the piercing screw, because a screwdriver could provide too much leverage and may possibly damage the gun.

If you are into revolvers you should have one of these very neat replicas in your collection.