Today I take the Crosman 362 out to 25 yards. This should be an interesting test.

I shot 5-shot groups with each pellet test. The rifle was pumped 6 times and rested directly on a sandbag. I shot with the peep sight and I will describe the adjustments as we go.

Naturally I shot at 10-meter pistol targets. At 25 yards they are the only bullseye I can see good enough to aim at.

It has been three months since I last shot this air rifle so I had to relearn everything — including the caliber. I couldn’t get any of the three .177-caliber pellets I selected to group at all. I wondered if the .22 caliber 362 was more accurate. Then, as I was returning from downrange, I had an epiphany. Wasn’t the 362 the one that was only offered in .22? Well, then — why was I shooting .177 pellets in this one?

Why do I tell you things like this? I guess it’s to show you that there ain’t nothin’ special about BB Pelletier. He’s just as goofy as the rest of you. Only he does it in public!

First up was the .22 caliber Crosman Premier. Five went into 1.423-inches between centers at 25 yards. At 10 meters five went into 0.917-inches, so this is about what to expect. 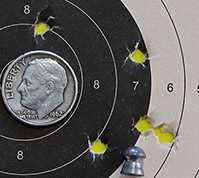 After seeing where this group landed I adjusted the rear sight to the left. The 362 rear sight adjusts by loosening one screw and sliding the sight left or right. I slid this one slightly left.

I have to observe that the 362 trigger isn’t bad. It’s heavy but crisp. That’s something I can work with.

The next pellet tested was the H&N Baracuda 15. Had I paid attention to the test in Part 3 I wouldn’t have chosen it, but it’s a good thing I did because it gave the best group of today’s test. In Part 3 five pellets went into 1.271-inches at 10 meters. Today at 25 yards five of the same pellets made a group that measures 1.149-inches between centers. Yes folks — the 25-yard group is smaller than the 10-meter group! 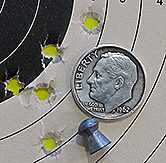 The final pellet I tested was the 18.52-grain H&N Baracuda Hunter Extreme. I haven’t tested this pellet very much in the past and I wanted to include it in the 362. If it is accurate it would make a fine hunting pellet for this rifle. I also included it because it is the heaviest pellet I’m testing in the 362.

Five pellets went into 1.252-inches at 25 yards. The pellets did move over to the left this time, so apparently it took a lot of rear sight adjustment to affect things. 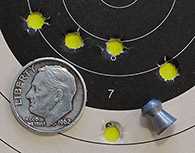 I’m not finished testing this rifle. I will continue to test it as it came from the factory — no steel breech and I’ll use the sights it came with. The only thing now is, I will remember that it is a .22.

I want to test it with other pellets as well as other numbers of pump strokes. I have read Part 3 again and see that I missed testing the 362 with at least one pellet that I said I would come back to.

The Crosman 362 offers a lot of value for the money. Readers have been steadily praising its virtues so I have resumed testing.