Today we start testing the 25-yard accuracy of BB’s Goldie, which is a .22-caliber Air Venturi Avenger that has been custom Cerakoted to BB’s tastes. But before we do that there are some things that must be done first. I said at the end of Part 3 that I wanted to detune my rifle that was set up a bit too hot for my liking. To do that involves lowering the regulator pressure and backing off on the hammer spring.

To lower the regulator pressure I went to Part 3 of the Avenger report that was written on June 18 of 2020. I followed the detailed directions given there but because we need to discuss this step I will talk about it now. The first step is to exhaust all the air in the reservoir and then turn the reg adjustment screw in all the way. Then you are supposed to turn the adjustment screw back out a quarter turn. I did that but when I pressurized the reservoir again the reg gauge went up to over 2,000 psi. 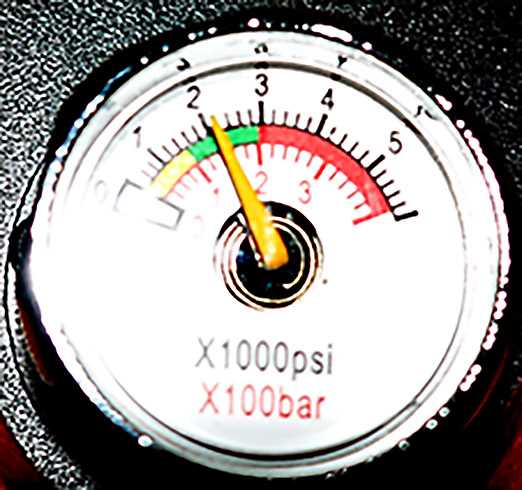 After turning the reg pressure adjustment screw out just a quarter turn, the reg registered 2,200 psi when the rifle was filled.

Each rifle will be different, And apparently my Goldie is a hot rifle! Too bad that’s not what I want. Once again I released all the air in the reservoir and this time I only backed the adjustment screw out an eighth of a turn.  When I filled the reservoir this time the reg. needle went up to the bottom of the green. Perfect! 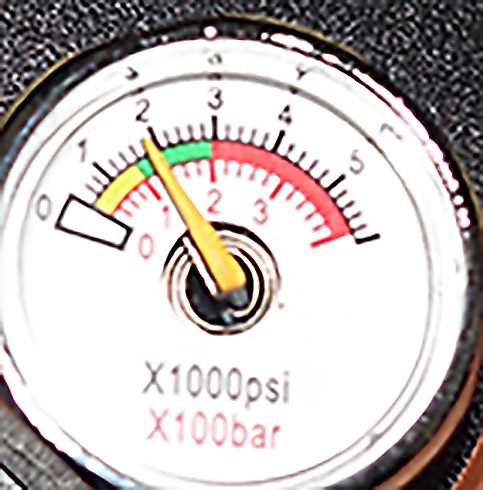 After the second reg adjustment the needle went up to the bottom of the green. Well, maybe it’s a bit higher than that, but I’m not adjusting the reg again.

The reg is now set to 1,800 psi at this time. Next I backed off on the hammer spring adjustment screw about one and one-half turns. That should be fine, but until I chronograph the shots I won’t know. I’m doing too much today to also chronograph, so I’ll save that for next time. And when I do we’ll already know what sort of accuracy these settings give us.

Today I’m shooting 10-shot groups off a sandbag at 25 yards. I am using the 10-shot magazine since I thought I remembered that it doesn’t affect the accuracy. Upon more research I wasn’t able to find that stated in any past tests of the .22-caliber Avenger, so next time I’ll shoot it for accuracy with the single shot tray. That being said, today’s best group of the first pellet was nearly as small as the best Avenger group ever shot from a single-shot tray.

First to be tested were Air Arms 16-grain domes that have proven to be the best pellets in an Avenger. The rifle was sighted for 10 meters in Part 3 so I just shot the first group with that scope setting. The pellets landed about two inches above my aim point. Except for the first pellet that hit lower, nine shots went into a quarter inch. All ten shots are in 0.606-inches.

I adjusted the scope and shot a second group. I took out the 10-dot with the first shot of the next group. Of course I did! So for the rest of the group I had to guesstimate where the center of the target was. And yet I still managed to put 10 pellets into a group that measured 0.248-inches between centers. That’s pretty darn good!

Even with the center of the bull blown away I managed to put 10 Air Arms 16-grain into a 0.248-inch group at 25 yards. I might do better if I could see the aim point, but it wouldn’t be that much better!

The Air Arms 16-grain dome is still the best pellet for a .22-caliber Avenger. Now let’s see about some others.

Next up was the Baracuda Hunter Extreme pellet. I remember recently where this pellet surprised me by being the most accurate of all in a certain airgun. In BB’s Goldie ten of them went into a group that measures 0.50-inches between centers. It’s the largest group of today’s test and, in light of all the other accurate pellets there are, this one isn’t for my Goldie.

I said I would measure the discharge sound in this report. It registered 90.8 decibels, which is pretty quiet for a PCP that’s putting pellet out in the 30 foot-pound range. 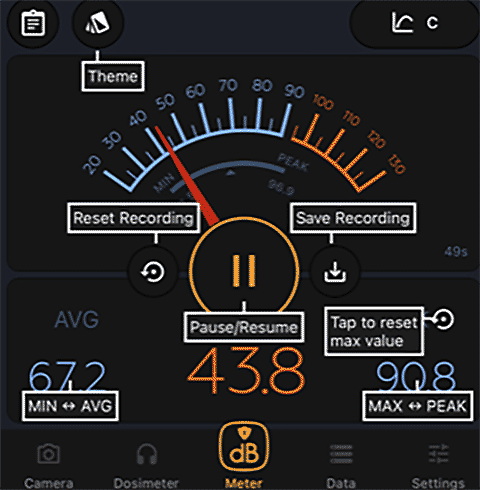 The last pellet I tested today was the JSB Exact Jumbo Monster Redesigned. Ten of them went into a group that measures 0.231-inches between centers at 25 yards. This time I barely preserved the aim point and, thanks to the clarity of the Meopta scope, I was able to see and use it for all 10 shots. This was today’s most accurate group, though in the past Air Arms 16-grain pellets have done better in a different Avenger. But this pellet will be one to retest.

I did adjust the Goldie trigger a little lighter this time. The pull is a definite two stage with some movement but no creep in stage two. Stage one stops at 11 ounces. Stage two breaks at 2 pounds 6 ounces.

BB’s Goldie is holding up quite well in testing. As this is the third Avenger I have tested and they have all been accurate I have to say that this model is a winner. In 2020 I said the Avenger is the best airgun I have tested this century! Nothing has changed since then.