Today I shoot the Umarex Air Javelin airbow for accuracy. I know that a lot of readers have been waiting for this! This will be an accuracy test, but as I said before, the AJ is such an important shooter that this report is going to proceed along different lines.

Before we begin — the inside diameter of the gas tube

Oh my, have some readers obsessed over this! They are busy redesigning the AJ the way it should have been, if only Umarex engineers were smart enough to have recognized it! I hear from AirForce all the time that they wish they were as clever as the people who redesign their airguns. But they know they aren’t, so they just let it ride. read more

That doesn’t mean I can’t shoot the Air Javelin (hereafter called the AJ) indoors. In fact, by shooting it indoors I will get a really good idea of how loud the report is. Remember that I could not hear it when I shot it at Industry Day at the Range in January. I’m making this report up as we go, so let’s get going! read more

This is a different kind of blog. I hope it’s one you will enjoy.

When I was at Media Day at the Range at this year’s SHOT Show, I stopped by the Mission Archery booth, where they were displaying the Sub-1 crossbow. It looked cool and they engaged me in conversation right away, so I asked where the name came from. They told me this bow can shoot 3-shot groups at 100 yards that measure less than one inch between centers. That caught my attention!

This is what Media Day is all about. Of course I would like to try. I wondered what the draw weight was? Two hundred pounds, I was told. Okay, deal me out. Maybe when I was 50 I could draw 200 pounds — certainly not today. Then the representative told me that his 13-year-old daughter could cock it. Well, with that I puffed out my chest and tried to cock it. When it comes to cocking crossbows, anything a 13-year-old girl can do…

Surprisingly, the bow cocked with relative ease! Just grab both handles of the cocking assist rope and stand up. The dynamics have been worked out and once the heaviest weight of about 100 lbs. (half the draw weight because of the cocking assist) has passed, the bow becomes quite easy to draw. At the end of the draw you are holding 20-40 lbs of force. It’s not that different from cocking a mega-magnum breakbarrel and learning to hold the barrel at the muzzle for the best leverage.

I shot the Sub-1 two times from a bench at a target 90 yards away. To my surprise, both arrows landed close to each other! This thing really works! And by the way, the bench I shot from is the same one I bought and will be showing you later this month! 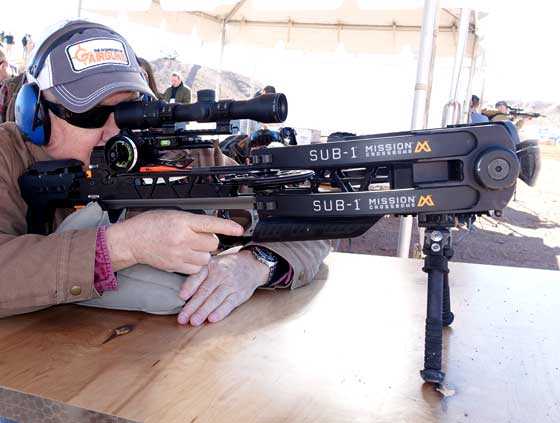 When I shot the Sub-1 at Media Day, I was impressed! 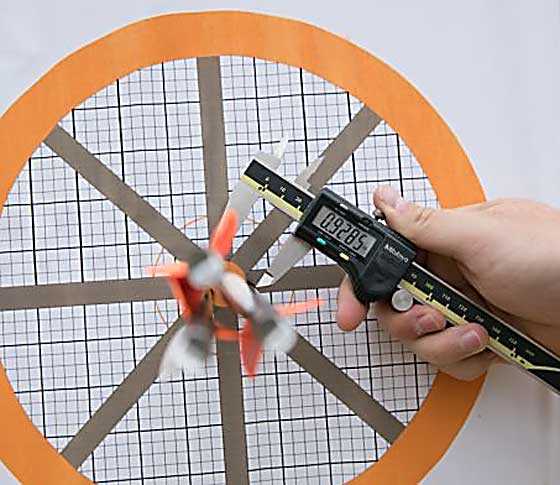 Three arrows into less than an inch at 100 yards is a feat, but not a one-time deal. With care and a little luck, it is possible. Remember, a Robin Hood will destroy either or both arrows, so this is risky!  Photo with permission of Mission Archery.

When I sent my SHOT Show report to Firearms News several weeks ago the editor asked if I would like to write a feature about the Sub-1. Sure I would! Today is the first step in that process. I contacted Mission Archery and they sent me the Sub-1 package deal. That’s the bow, a 1.5-5X32 Hawke crossbow scope with rings, a cloth carrying case, a quiver, a bubble level and three 20-inch carbon fiber bolts (arrows) that weigh just over 400 grains. That package retails for $1699, which is on the high end for crossbows, but not at the top.

I weighed one of the arrows (they are called bolts when used with a crossbow) and got 417.8 grains. The bow is rated to shoot these around 340-350 f.p.s. That may not sound fast to a airgunner but in the world of crossbows it’s pretty brisk.

We have seen airbows like the Air Venturi Wing Shot that they now call the Seneca Wing Shot II in the past few years, and we know they will launch a 430-grain Air Bolt at 550-600+ f.p.s. As far as the application of launching arrows, they aren’t that different, but the operation of this crossbow is entirely new to me. And the Sub-1 crossbow has technology that makes it new to almost everyone.

The Sub-1 weighs 7.5 lbs. without the scope. No other sights are provided so some kind of optical sight is required, and the little Hawke they sent with it is lightweight and compact. We know Hawke quality from their airgun scopes, and it appears to have crossed over to this one. I say that from an initial examination. Even more than a pellet gun scope, I’m going to have to learn to use this one, because an arrow’s trajectory is enormous! So there’s more to come.

The bow is 30.25 inches long and the width, axel to axel, is 13.8 inches uncocked and 10.7 inches cocked. The pull is adjustable to one of six positions, ranging from 14.5 to 15 inches. It came set in the middle at 14.75-inches, but I found 15 inches to be the most comfortable. I find that holding a crossbow is different than holding a rifle and the longer pull feels fine. It brings my cheek to the right place for the scope.

There are 24 patents pending on the Sub-1, but the most significant must be the ability to uncock the bow. All other crossbows require you to shoot an arrow to safely uncock them, but the Sub-1 has been designed to make unckocking easy and safe. You put the safety on, remove the arrow, push the decocking button, pull the bowstring back about 1.5 inches with the cocking assist rope until you hear a click, then let the string go forward under control (you hold both cocking rope handles). This is a very big deal, because good arrows can cost as much as $20. You don’t want to shoot them into the ground too many times.

The decocking button (arrow) is a first for crossbows. The automatic safety is just above it.

The pistol grip looks like one from an AR-15. Indeed, any AR-15 grip will fit, as long as it doesn’t have a beavertail.

I’m not kidding — they sent me a bubble level for the crossbow. The sight line of the Hawke scope is about 2.75-inches above the arrow rail, so we will have the same difficulty with canting at distance that we have with any airgun or firearm. I’m right-handed so the bubble mounts on the left side of the bow. I told them about the Leapers UTG Bubble Leveler scope, so maybe they can work out a deal for crossbows.

Here is a rule you will recognize. Crossbows are not to be fired without an arrow. In other words — no dry-firing! It’s bad enough for a spring-piston airgun, but it’s death for a crossbow! In fact, the Sub-1 manual specifies that only arrows weighing 400 grains or more are to be shot, so they must need the resistance for the bowstring.

The arrows have a half-moon nock that engages the bowstring. Many crossbow bolts have flat ends without a nock. The Sub-1 requires 20-inch arrows with the half moon nock.

The trigger is what Mission Archery calls a match trigger. It releases at 3 lbs. 6 oz. In the firearms world that would equate to an AR-15 National Match trigger that breaks under 5 lbs. I had one on my AR for several years and thought it was nice until my Geissele was installed. Of course airgunners are used to triggers that take only grams to release, so please understand we are talking about a different technology. I got to squeeze this one twice at SHOT (remember — no dry firing) so I will have to wait until I shoot to give you more on the trigger.

The safety goes on automatically when the bow is cocked, and you can appreciate that because you then have to put an arrow on the bowstring! Don’t want the bow to fire while you are doing that! You know about beartrap “accidents” when breakbarrel spring guns fire while they are being loaded? Crossbows have the same danger in a triangle that’s defined by the cocked and uncocked bowstring.

You’ll laugh at this one. The manual says to lubricate the rail (the deck upon which the arrow is launched) with rail lube every 5-10 shots. The bowstring runs along this rail and has some downward pressure, so there is constant friction. The lube helps prolong the string’s life. But here is the deal. You can go too far with lubing, just like you can with oiling a spring gun.