Before we start, a little announcement. Many of you are already aware of this, but Pyramyd Air has purchased the assets of Compasseco, a Kentucky-based airgun dealership with strong ties to Chinese airguns. In fact, Compasseco could be said to be the company that helped guide Chinese airgun makers into the modern American airgun market.

Pyramyd Air plans on keeping the Compasseco warehouse for the foreseeable future, and they plan on continuing the sales and support of Compasseco-branded guns, especially those under the Tech Force brand name. Now, on to today’s report.

I wanted to subtitle this report “A look at the inside” because today I’m going to show you the inside of most scopes. It just happens to be on the outside of the scope I just mounted on my .43 Spanish Remington Rolling Block rifle, which affords me an excellent opportunity to show you how scope adjustments work. 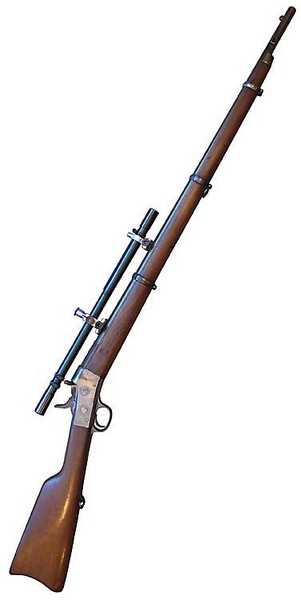 My .43 Spanish Remington Rolling Block rifle looks right with this vintage Unertl scope mounted on it. From what I’ve read, 25 percent of the buffalo rifles were scoped, so scopes on these old guys is not such a foreign thing. When the rifle recoils, the scope slides forward in its mounts. Actually, when set up correctly, the scope never moves–the rifle simply moves out from under it in recoil!

This Unertl scope is unusual because its adjustments are all on the outside of the scope tube. And it slides under recoil. When the rifle comes back, the scope remains in place, appearing to move forward in the mounts. Though the scope moves, it returns to absolute zero every time, which is why it is so repeatable.

No erector tube
Many of our more advanced shooters are familiar with what I’ll be showing today. Essentially, these scopes are ones that have no internal erector tube, because the entire scope tube is being used as the erector tube. I’ve talked about how the erector tube works in many reports, but today I have the chance to show it to you. I think seeing how it works will solidify its construction and operation in your minds.

Older scopes are viewed today as vintage designs, which many newer shooters see as somehow limited in capability. Certainly, they’re not as advanced as the most modern optics we see today. They don’t have the nitrogen-filled internal optics of today’s best scopes, so they can fog up in certain climatic situations. And, they certainly don’t have all the high-tech lens coatings that aid in light transmission. So, you’ll be seeing darker target images and some flaring from reflected light. Compared to a modern scope, they contain from one-half to as little as one-third the number of parts to do the same function as a modern scope.

In their simplicity, they have one advantage that most modern scopes cannot equal, and that’s ruggedness. They are not unbreakable, because no optical instrument is that, but they are tough beyond the boundaries of today’s scopes, and they are easy to repair when they do break. They are the scopes that were used by military snipers in wars past and they delivered a remarkable performance under the most hostile conditions. 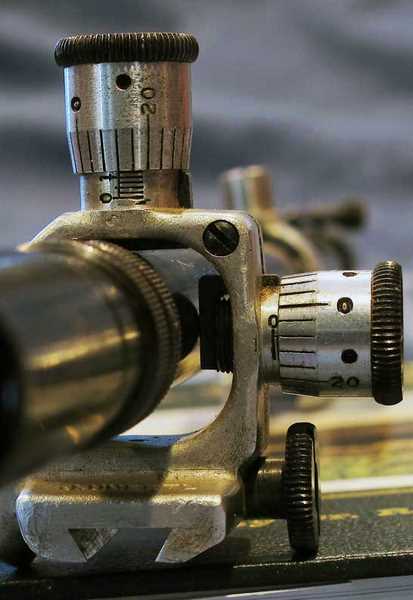 Here you have a very clear picture of the horizontal adjustment knob and a little of the vertical knob. Both are identical and work in the same way. These knobs have very precise clicks, and the knobs can be set to be very stiff to turn, so there’s no making a mistake. This scope is not mounted, so pay no attention to where the adjustments are set. 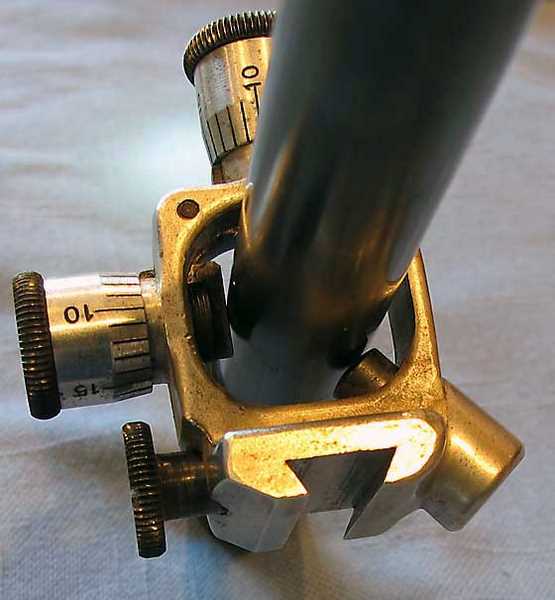 Looking at the back side of the scope mount, you see the return spring. The way this mount is designed, one spring acts on both the vertical and the horizontal adjustment knobs. It pushes against the scope tube, just as an internal spring system would do against an internal erector tube. The tension on this spring can be adjusted by the user, something that’s impossible with an internal erector tube. The dovetail fits on a machined steel scope block, and the screw has a shoulder that fits into a hollow in the top of the scope block. It positively will not move. But the scope itself is free to move back and forth under the control of these adjustment knobs and the return spring. 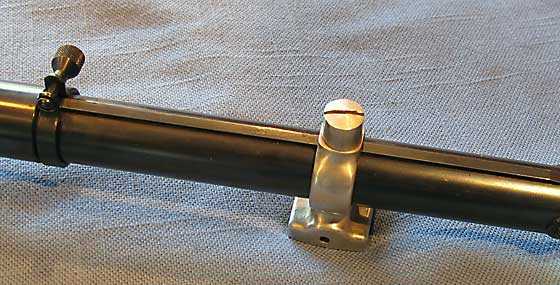 The front scope mount allows a steel rail on the scope tube to move through the mount backwards and forwards. The rail’s shoulders prevent any sideways twisting. At the left of the picture is the adjustable scope stop. The spring tension in this mount is set to compensate for the recoil of the specific rifle it’s mounted on. Talk about a practical application of the artillery hold!

How the outside-adjustable scope operates
When the rifle recoils, the scope remains in place while the rifle moves rearward underneath it. After every shot, the shooter slides the scope all the way back against the preset scope stop, making it ready for the next shot. If you forget, the scope eyepiece will be too far forward for you to aim, so you’ll be reminded. Some outside-adjustable scopes have large, coiled springs around the outside of the scope tube to return the scope to the starting point. Because the scope tube is precisely made, each time the scope is brought back to the start, it is in the exact same position as before. That’s why benchrest shooters use this type of scope to set world records.

The sliding motion is what scopes with internal erector tubes don’t have. They must suck up all the recoil and remain rigidly in place regardless of what hits them in terms of force. Scope makers have gotten very good at ruggedizing modern scopes so they don’t have problems with recoil; as you may know, spring airguns gave them some of their biggest challenges. Because they recoil in both directions when shot, springers put a strain on scopes in both directions. An externally adjusted scope like the one you’re looking at here wouldn’t be bothered by this two-way movement, but scopes that have to remain rigid certainly are. 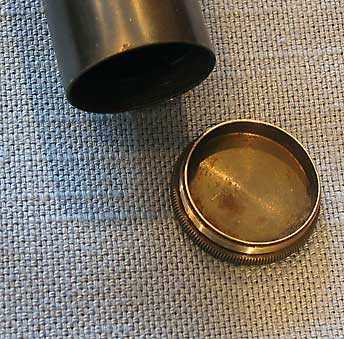 The scope caps are steel caps with extremely fine threads cut into their edge. They fit the scope tube precisely.

I’ve used this excursion into scopes to illustrate how a modern scope works. By seeing the adjustments exposed, you should be able to better visualize how they must work when hidden inside the outer scope tube.