How fast does black powder burn?
What is lock time?
Why does lock time matter?
Lock time for firearms
Rimfire cartridges were the problem
Summary

I’m writing this report because of a discussion we had on the blog a couple weeks back where readers were using the term lock time inappropriately. Don’t fret — most shooters do the same.

They were talking about the time a pellet stays inside the barrel of an airgun when it fires and calling it lock time. It isn’t. I promised then to address the subject and today is the day. Lock time relates only to a flintlock firearm.

How fast does black powder burn?

Hakim
The Egyptian Hakim 8mm battle rifle was an adaptation of the Swedish Ljungman 6.5mm rifle. It’s a gas-operated semiautomatic that has close-fitted parts (the Swedish heritage) and an adjustable gas port to adapt the rifle to different ammunition. It’s been called the “poor man’s Garand” and the “Egyptian Garand,” but its operational history tells us it was anything but. Where the Garand operated well in a dirty environment, the Hakim jammed quickly when sand was introduced into the mechanism. Not a gun for use in the desert!

In 1954, Egypt contracted with both Anschütz and Beretta to make a number of training rifles. Anchütz made .22-caliber air rifles, and Beretta made a 10-shot .22 LR semiauto. Navy Arms wound up buying most of the air rifles and importing them to the U.S. in the 1970s. They ranged from a few that had apparently seen little use to the majority that looked like they had been stored in a sewage ditch.

I acquired a Hakim air rifle through a newspaper ad. After discovering what it was, I went on a buying spree that netted me more than a dozen rifles over the next few years. I’ve cleaned and rebuilt them exactly as they came from Egypt, and I’ve also seen a couple that others have cleaned up and tuned. The least I’ve paid for one was $60 and the most was about $150, but the price has risen considerably since those days a decade ago. Today, a good shooting specimen should sell for about $250-300, while a nice one will command considerably more. But beware of the ones that have been reworked, because they’re out there. I see one on Gun Broker that has parts missing, and the starting price is about twice what it’s worth, in my opinion. 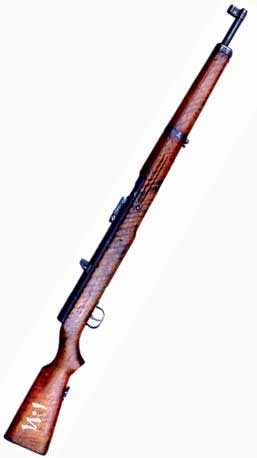 The Hakim pellet rifle was made by Anscütz in 1954.

The 8mm Hakim battle rifle is closely fitted and not suited to a dirty battlefield.

The Hakim action is based on the Falke 90 air rifle that I showed you last year. And the Falke 90 is based on the BSA Airsporter. The rifle is an underlever spring-piston action that’s loaded through a tap. And like the Falke, the Hakim is doing very well to make it into the mid-500s with medium-weight, .22-caliber pellets. They can be tuned to shoot faster, but in doing so you lose the calm demeanor the rifle was designed to have and get a bucking, snorting headache machine in return. It isn’t worth it, in my opinion.

Because it’s a taploader, the Hakim will do best with oversized pellets and with those that have thin skirts. I’ve always found RWS Superpoints to be the most accurate in my rifles.

As far as accuracy goes, I had no problem putting 5 shots into a dime at 10 meters. I never really shot the rifle at longer distances, but I think the accuracy would hold together out to 25 yards or so.