The full title of the rifle we are looking at today is the Diana AR-8 Professional Success. That’s right. Apparently the Germans have hired Koreans to name to their airguns. Remember Shin Sung — Good Luck for Dignified Masterworks?

The rifle I’m testing is a .22, but it also comes in .177. The serial number I’m testing is 20067725. The name AR8 is derived from the Blaser R8 Professional bolt action rifle, though that firearm bears little physical resemblance to this air rifle. Perhaps they mean similar in performance within the airgun world.

The AR-8 has a gas piston unit — the Diana N-TEC piston. That is a unitized piston assembly with an internal gas spring. I tested one before in the 340 N-TEC, and I know how nice it can be. Let’s hope the AR-8 tests just as well.

The AR-8 is a large air rifle. It’s 48 inches long and weighs 7.2 lbs. You know you are holding something when you heft this air rifle. The stock is black synthetic, shaped with the rounded forend Diana is putting on many of their rifles these days. There’s the hint of a schnable at the tip. Fine stipple-like texturing on the forend and pistol grip is too smooth to give any grip, and the stock feels slippery in my hands.

I find the cross-section of the forend too wide for comfort. The pistol grip is very vertical and thin, so it feels good to me with my medium-sized hands. The butt has a thumbhole cutout that’s ambidextrous, and I like it. I’m not a fan of thumbhole stocks, but for a airgun this inexpensive, I think it compliments the rifle.

Why does B.B. think $350 is inexpensive? Because this is a Diana! You get their accuracy, an adjustable trigger (no, I don’t think it’s T06, or if it is, everyone is sworn to keep it a secret), and reputation for build quality. Plus it has a gas piston/spring. Just because it’s a Diana you know I.m going to test for barrel droop! But, yes, at $350, this could be a terrific bargain.

The sights are unlike any I’ve seen! I wish I had designed them.

The front sight adjusts for elevation. A thumbwheel raises and lowers the sight element, and the pellet moves in the opposite direction. 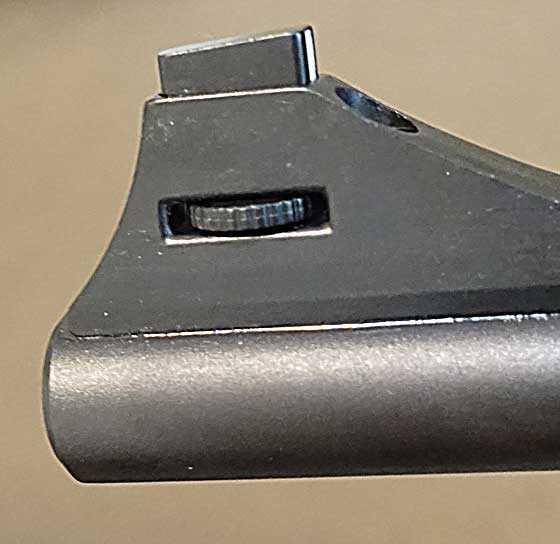 The front sight adjusts for elevation, via a thumbwheel!

The rear sight is unique. A broad white stripe points to a shallow squared notch where the front sight should be centered. But that white stripe causes me to want to center the green front fiberoptic dot above it, in a “snowman” configuration. My Taurus 1911 pistol has something similar and once I got used to it, I liked it a lot! The jury is out on this one, but at least the engineers at Diana are trying.

The rear sight has a locking screw on either side of the sliding notch. Loosen them both and slide the sight in the direction you want the pellet to go. Then lock them down. I haven’t seen this arrangement on a pellet rifle in a long time! 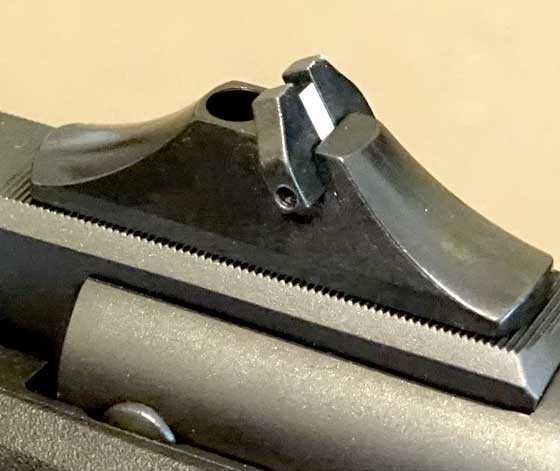 The rear sight has a small Allen locking screw on either side. Loosen both, then slide the sight in the direction you want the pellet to go.

The AR-8 has a traditional Diana scope base atop the rear of the spring tube. All your recent Diana scope mounts will fit it. Will you need a drooper base? I will test for that.

OMG!!! Trigger fanatics are going to love this adjustable trigger! It is extremely crisp and very light. Details in Part 2. I am betting it is breaking at under 2 lbs. out of the box.

There are three adjustments the user can make. The first stage travel is adjustable and the factory sets it at the minimum. I don’t care for it, but those who like single-stage trigger certainly will! And I can adjust it to suit me. 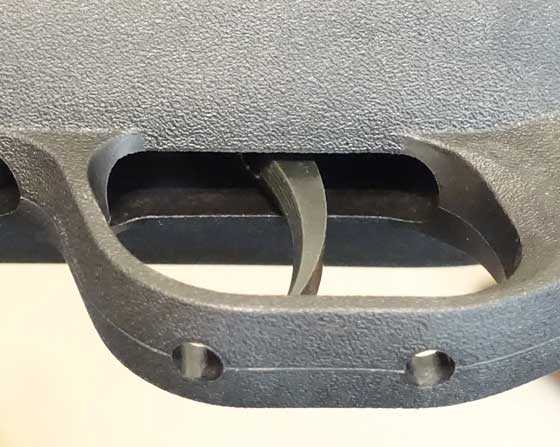 The trigger adjustment screws are so deep inside that I couldn’t capture them. There are three — one behind the trigger and two in front. Note the straight trigger blade.

Both the stage one and stage two pull weights are also adjustable. I have seen some Rekords that couldn’t be adjusted this nice. And the blade is very straight, which is my personal preference.

I cheated, like I always do, and fired a couple shots. The stock slapped my face like a woman, when I got too fresh on the first date! I really hope that goes away (the stock slap — not the women).

The rifle is detonating right now, and the firing behavior should change when that ends. I really hope it does, because this will be painful to shoot for accuracy, if not.

The Diana AR8 has many differences. It’s not just another breakbarrel with a new name. This is one to examine carefully. That’s what I plan to do.