Does the pivot point of a breakbarrel rifle make it potentially less accurate? (February 2010)

Every now and then, I get asked this question: By repeatedly breaking open a breakbarrel rifle, could that lead to accuracy issues due to possible misalignment of the barrel with the action? There are some customer reviews on this site where shooters have stated that they know their rifle could never attain great accuracy because it's a breakbarrel. We also get similar comments on the blog. In fact, nothing could be further from the truth!

One of the most accurate long-range spring rifles ever made is a Whiscombe, and it's been made as both a breakbarrel and a fixed barrel...with no discernable accuracy advantage for either.

This Whiscombe JW 75 comes with all four smallbore airgun barrels. 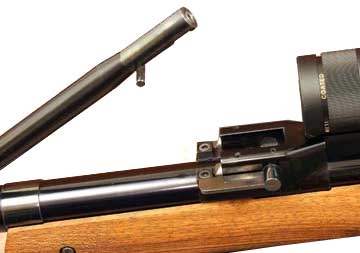 Although it's a breakbarrel spring gun, the Whiscombe JW 75 is as accurate as a fine precharged air rifle.

There have been any number of accurate breakbarrel target rifles throughout the years, but the epitome must be the Diana 65. It could hold its own with any target rifle of its time, but RWS decided to change the configuration by transforming the action to a fixed-barrel sidelever when they created the rifle that finally became the model 75. I doubt that any accuracy was gained through this conversion, but that was the way the market was headed, so it was a good business decision.

The Diana 60 and 61 are precision target rifles, yet they're breakbarrels, too. They won't lose accuracy, even after hundreds of thousands shots have been fired.

Breakbarrels have a pivot bearing that serves as the barrel's axle when the rifle is cocked. This bearing is of large diameter to spread out the load. There's also some kind of lock to keep the barrel closed during shooting. This can be a spring-loaded ball bearing, a spring-loaded chisel detent catch or even a mechanical catch that's unlatched by the shooter prior to breaking open the barrel. On a gun with a mechanical lock, there's also a spring-loaded detent, but it's usually smaller and uses less spring force than the detent on a gun that has no lock because the mechanical lock serves to keep the barrel closed. The purpose of all locks, mechanical or spring-loaded, is to prevent air loss on firing and to return the barrel to the same place every time. It's the reason breakbarrels are just as accurate as fixed barrels. 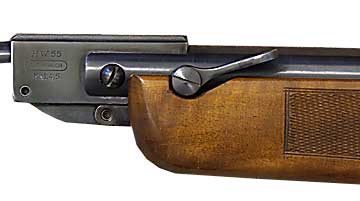 The barrel latch on this Weihrauch HW55 target rifle locks the barrel in perfect alignment with the rear sight...every time. The HW55 won the 1969 World Championship.

Another fallacy regarding breakbarrels is that the continuous action of cocking the rifle will eventually bend the barrel. In truth, barrels can be cocked hundreds of thousands of times with zero deflection. However, by letting the barrel slam shut just once, you can easily bend it. Airgun barrels are made from dead-soft steel and can be bent by hand if you know what you're doing...in fact, that's how they're straightened!

The final fear about breakbarrels is that the scope is mounted on the receiver and the barrel moves independently. Can the barrel come back into alignment with the scope time after time? Yes! It can and it does. Many target-class breakbarrel air rifles have shot 10-meter groups measuring less than one-tenth of an inch between centers of the widest shots. They don't have a scope, but their aperture rear sights are also mounted on the receiver and should, therefore, have the same alignment problems. Yet, they don't.

The simple truth about breakbarrel spring-piston rifles and pistol is that their designs are both robust and potentially accurate. The "problems" we've looked at here are not really problems at all.