There was a good response to my question about a scope primer, so I will do it. I’ve probably written most of this stuff before, but this time I’ll write it with an eye toward chapters in a small book. Thanks for your input.

Scopestop asked me for links to all the scope posts I’ve made. Here are about half of them:
Sighting in a scope – Don’t get carried away
Where (and how) to locate a scope
Scope mounting height
Adjustable scope mounts
Another problem with scopes: Not mounting them correctly
Shooting with a pistol scope
Adjusting a scope
At what range should you zero your scope?
What causes scope shift?
Another cause of scope shift: over-adjusted scope knobs
More about sighting-in: How to determine the two intersection points
How to optically center a scope
Scope mount basics – part one
Scope mount basics – part two

On to the rifle!
Reader KTK advised me that the rear sight element can be switched to a square notch, as well as the U-shaped notch I criticized yesterday, and indeed, it can. Diana used to put four different notches on the outside of the rear sight, so you could see what was available, and I never thought to look closer on this one. A tiny Allen screw on the left side of the scope holds the notch plate. Flip it over and enjoy the other notch. Thanks, KTK!

I mounted a scope on the RWS Diana 460 Magnum using a prototype of the new RWS Diana scope mount I’ve been talking about that solves the scope stop situation. It works well, but there are a few more details to refine before it goes into production, so I wouldn’t put off scoping my rifle if I were you.

One thing I can tell you. When this new type of mount does become available, you’ll be able to scope any RWS Diana spring rifle in less than 10 minutes, not including sighting-in! It’s that easy.

I used two scopes for this test, because I was also testing the mount. The first was the UTG Tactedge 4×40 sniper scope that I think is such a great deal. The other was a Leapers 3-9x40AO scope with red and green illuminated reticle.

First shots
The first few shots were at a target in my backyard, where I’m limited to about 20 yards. Right off the bat, the accuracy was superb, because I started shooting with Beeman Kodiaks, and, as my testing later revealed, they’re the No. 1 pellet for this rifle. 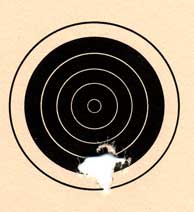 This group of 5 Kodiaks at 20 yards got me excited and sent me off to the big range, in spite of the wind. It measures 0.407″ center-to-center.

The rifle kicks pretty hard and buzzes a little. But the T05 trigger is great – both light and crisp. I used the artillery hold, but this rifle isn’t as sensitive as a breakbarrel. There is no dieseling to speak of and the Kodiak pellets are definitely not supersonic.

At the big range, I initially started shooting at 35 yards. The 4×40 Tactedge scope was still sighted-in from home, but I did have to adjust it up a little. The wind was gusting 10-15 m.p.h., but those heavy Kodiaks flew true just the same. 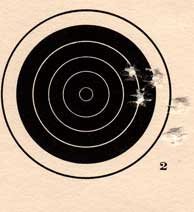 Then, I switched scopes to the 3-9x, but the groups didn’t get any tighter. Maybe farther out the more powerful scope would have been an advantage. I also tried JSB Diabolo Exact pellets, Crosman Premier 7.9-grain pellets, Logun Penetrators and Gamo Tomahawk pellets. None of these others were nearly as accurate as the Kodiaks.

While this was transpiring, the cocking became smoother, though not necessarily any lighter. I measured it again at home after 125 shots, and the scale now says it takes 44 lbs. of force, so just a quick shooting session dropped 3 lbs.

Finally, I pulled back to 25 yards and shot another group with the Kodiaks and the 3-9x scope. 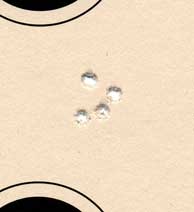 This 25-yard group of 5 Beeman Kodiaks measures 0.379″ center-to-center. That’s smaller than the 20-yard group that got me started! This rifle can really shoot. The group looks like only 4 holes, but that hole on top passed 2 pellets. In your hands it appears larger and cleaner.

So, the 460 Magnum can shoot. It’s such a pleasure to shoot a rifle that actually helps you shoot well, rather than one that takes all the technique in the world to deliver adequate accuracy. Tomorrow, we’ll look at the velocity.