Today’s report is the result of a lot of research I’ve been doing for a large article that will be coming out in Shotgun News in May. Having examined the powerplants of spring rifles of the 1970s, when the 800 f.p.s. barrier had just been broken, I’ve uncovered some interesting things I’d like to pass along. I was alive during the period when the biggest news in the airgun world was which rifles were capable of 800 f.p.s., the first so-called “magnum” velocity threshold, so this stuff probably impacts me more than most of you.

I don’t want to get into which guns were in that category, because that’s the subject of the SGN article, but a couple that weren’t in that category came to the forefront while I was studying. The first was the Diana model 27. 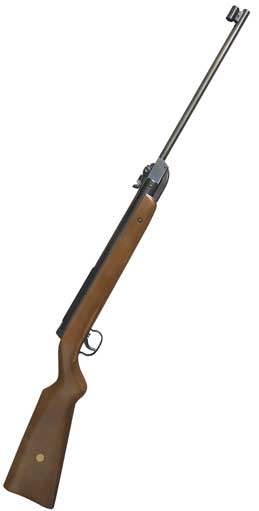 The Diana 27 is a fine vintage breakbarrel

I reported on the Diana 27 back in 2005, but I didn’t give much technical information then. I just told you how much I liked all three of the guns I had owned – especially the one I own now. It’s a .22 and as far as performance goes, this one will put most of you to sleep. It averages 450 f.p.s. with .22 caliber Crosman Premiers.

The trigger is somewhat tricky to adjust until you know the secret, then it adjusts as easily as a Rekord, if not as crisp. But, it’s a long sight better than the triggers on today’s crop of breakbarrels, for the most part.

Cocking is only 14 lbs. and firing is dead-calm with a small forward jump. In short, the Diana 27, when properly tuned and adjusted, is about as nice an airgun as you’ll ever find. It’s very similar to a tuned R7.

Back in those days, I knew Diana made a more powerful rifle known as the model 35. I never came across one while they were new. When Diana changed their lineup, the 35 became the 34. After years of looking at airgun shows, I finally snagged a 35 for myself. The years of wanting one had caused me to project all the wonderful attributes of the model 27 onto the gun, in addition to its extreme power. Remember, I’m coming from the time when 800 f.p.s. was considered a magnum air rifle. To me, a 35 that shot 725 f.p.s., as advertised for the 35, was simply a rifle that hadn’t yet benefitted from my expert tuning!

Well, owning is a lot different than imagining! First, the 35 was a larger rifle in all dimensions. The stock was thicker and deeper and the whole rifle was heavier. While the little 27 is a joy to hold, the 35 is about as sculpted as a floor joist. And, it vibrates like crazy when fired! I used to say that shooting a S&W model 29 revolver with full-house .44 Magnum rounds is like hitting a fastball with a cracked bat. The 35 feels that way when it shoots. For those of you who haven’t played baseball, the vibration stings your hands.

So, being the “guru” of spring guns that I was, I tuned the 35. The cocking effort went down but so did the power! I couldn’t get it to shoot .22 Crosman Premiers faster than 542 f.p.s.! Before my tune, it shot them 7 f.p.s. faster. I thought I was incapable of tuning this great rifle up to even its advertised velocity, to say nothing of making it a magnum.

That was back in 1998. Ten years later, I’ve discovered in my research that the Diana 35 never did live up to its advertised potential. In .177, it topped out at 675 f.p.s. instead of the 725 advertised. The much lighter and easier-to-use 27 went 650 in .177. In my earlier post, I said they would be around 600, but that was based on the .177 I owned, and I guess it must have been tired. At any rate, a difference of 25 f.p.s. is nothing, so why bother the larger rifle with the harsher firing characteristics?

The difference between the two rifles was the stroke of the piston. The 27 was just about maxed out for the stroke of its piston. When Diana made the piston fatter but didn’t stubstantially lengthen the stroke, the rifle didn’t increase in power. A heavier mainspring added after the 35 was in production only made cocking harder; it did nothing for the velocity. Which brings me to the point of today’s report.

So what?
Knowing that there’s a relationship between the piston bore and stroke helps explain the performance of certain spring rifles. For example…why the Gamo Whisper is such a little sweetie in .177 and why Gamo doesn’t even bother bringing it out in .22. And, why the Gamo CFX gets 950 f.s. with a light .177 pellet and only 600 f.p.s. with a light .22.

Look at it from a different perspective. The Webley Patriot is a smasher in .25 caliber but a pussycat in .177. It cannot use its power in the smaller caliber. I once owned a handmade spring rifle made by a hobbyist who spent thousands of dollars to create the world’s most powerful spring rifle. He took a Beeman R1 and supersized it by 25 percent – building an 11 lb. spring rifle that took 75 lbs. of force to cock. When all was said and done, his monster was slightly less powerful than a tuned Beeman R1. I see that I haven’t reported that one yet, so I’ll add it to the list.

The bottom line is that there are balanced spring rifles and there are rifles that are not balanced. A TX200 is balanced, as is an R7. The Gamo Whisper in .177 is very balanced, but a CFX in .22 is not balanced as well. While it’s a fine airgun with respect to handling and accuracy, it doesn’t have the power potential for .22 caliber.