Update on Tom/B.B.: Things are still progressing smoothly. He’s being fed intravenously and is now allowed to drink some water. Today’s blog came from B.B.

Here’s a little teaser: Pyramyd Air will be revealing something new and exciting on Monday, May 3. A lot of people have been working on this surprise for months. No more clues. And don’t even think of trying to get any info out of Edith!

Ever wonder which airgun you’d want if you were on a deserted island (think “Gilligan’s Island”)? 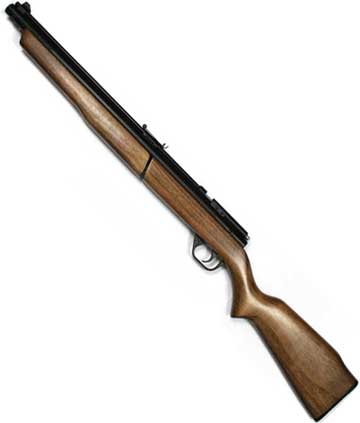 On a deserted island and hunting for food? Hope you have the Sheridan Blue Streak with you!

The Sheridan Blue Streak, which I got in 1978, is my choice as a survival gun on a deserted island. Does that surprise you? You probably thought I’d pick the Discovery or the Beeman R1 (my personal R1 is an older model and has open sights, the current one does not). They’re great rifles, but each rifle and all other powerplants just can’t bring to the table the reliability and flexibility of a Sheridan Blue Streak.

Why I picked a multi-pump
Imagine the variety of critters you could dispatch with a multi-pump. Put 2-3 pumps in the gun, and you could easily take a rabbit at relatively close distances. A few more pumps, and birds (head shots, please) would be on the menu. Put in 7 or 8 pumps, and you’ll be taking larger lizards and even some snakes. Again, head shots.

I suppose I could take a wild pig with 8 pumps. While I don’t consider this humane, I’m talking strictly about a survival situation. And, you’re well aware of a large airgun manufacturer that already advocates taking a wild pig with a head shot with a .177 cal. rifle. A Sheridan air rifle is .20 caliber, which offers a bit more punch.

The only thing that might need regular maintenance on a multi-pump is a seal. As I’ve stated for years, keep one pump in the rifle when you’re not shooting, and you’ll protect the seal. My 32-year-old Blue Streak still has the original seal because I’ve followed this procedure religiously.

What about oiling the pump lever? Pellgunoil is the best thing, but what if you didn’t bring any with you? How about coconut oil? (I expect to find coconuts on my island!) That ought to do it for maintenance. Sounds simple. And that’s the point. I don’t want a gun that needs to be handled with kid gloves or has lots of areas that could fail or that might need special attention to keep it functional. The gun has to take care of me, not the other way around.

Spring-piston: I own quite a few spring guns and have extolled the virtues of this dirt-simple powerplant. However, there’s one hitch. The mainspring could break. While it IS a remote possibility, I’m totally out of luck if that happens. Gas springs don’t usually fail, but this is a life-and-death situation, and I don’t want to risk even the slightest chance something could go wrong if I’m depending on an airgun to survive. Plus, the piston seal could get nicked, and the piston would lose compression. There’s very little you can do once that happens.

Single-stroke pneumatic: This powerplant just doesn’t have enough power to take small and medium game. While I could use the stock to club an animal, that’s not really what I had in mind.

CO2 gun: My deserted island is warm enough for CO2, but where will I replenish my stock? Plus, I’ll need Pellgunoil or the gun will start to leak after a short period of time. I don’t think coconut oil will be a good substitute.

Precharged pneumatic: For those of you who thought my choice would be the Condor or Marauder, I’m sorry to disappoint you. I won’t have air to replenish a scuba tank or electricity or gasoline to power a compressor. I could take a hand pump, but that’s just one more piece of equipment that could break or need maintenance. Remember, I’m trying to make this as simple as possible with the least number of things that could go wrong.

The variable power of a multi-pump was one of the deciding factors. I don’t want a gun so powerful that my pellets rip through a critter and exit the other side. I want the ammo to stay inside and create a larger wound channel. This ensures that the animal will die faster.

One final thing that no on talks about is the shooter’s ability to operate the gun at lower levels that involve less stress. The Blue Streak (and the Benjamin 397 and 392) is already a very under-stressed airgun. But you have an ace up your sleeve if you own one of these in a survival situation.

What else would I want/need?
Pellets! I can easily pop out 1,000 pellets on a weekend, but I could make that many last a year or more. My first choice would be Crosman Premiers, as they deliver very consistent velocities.

I’d also like to take a sharp knife, a multi-tool and a flashlight. I could get along without these, but they’d be nice to have.

Which gun and what equipment would you take to your deserted island?