Unlike most of us, Vince gets to look under the hood of a lot of strange airguns. Today, we’ll get a peek at two that are related but separated by years.

Yup. BB was right. Pointy is a TS45. But I’m getting ahead of myself.

Let me back up a bit. Some time ago I blogged a older no-name sidelever Chinese airgun I bought in a bunch with some bottom-feeder Industry Brand stuff. Normally, I wouldn’t have given any of those pea-shooters a second thought, but this particular rifle demonstrated one unexpected quality that really caught my attention: It shot GOOD!

Not talking about velocity, mind you. It’s amazing how being relegated to basement shooting will make you less concerned about that. This little gun, with less-than-precise open sights, was routinely shooting 10-meter groups of less than 3/8 inches. That’s not bad, especially for a rifle that, shall we say, doesn’t exactly represent the cutting edge of air rifle design. But, whatever shortcuts were taken in building this gun, the barrel sure wasn’t one of them.

The gist of that blog was (1) What the heck is it? and (2) What does its family tree look like? The second question was answered pretty easily. The gun shared many details with the old BAM/Xisico XS-B3 and XS-B7 rifles that were still available until at least a couple of years ago. But what was it?

One reader identified the logo for me. The gun (whatever it was) was made “EMEI,” a Chinese factory that is apparently a notch above the Shanghai factory that makes Industry Brand stuff. Based on B.B.’s description of a TS45 he bought many years ago, I dismissed that because the trigger is different. But B.B. had another TS45, an even earlier one, and THAT’S the gun that B.B. thought was the same as mine. When he tested it, he sure didn’t get the same sort of results I was getting.

B.B. sent me his TS45, I plunked them down side-by-side and started comparing the two. Pointy is on the bottom:

The lengths of the barrels and actions, the cocking lever, and the location and size of the loading port seem to match. The front sights are of the same type (AK47-style, adjustable with a special tool) but different in detail: 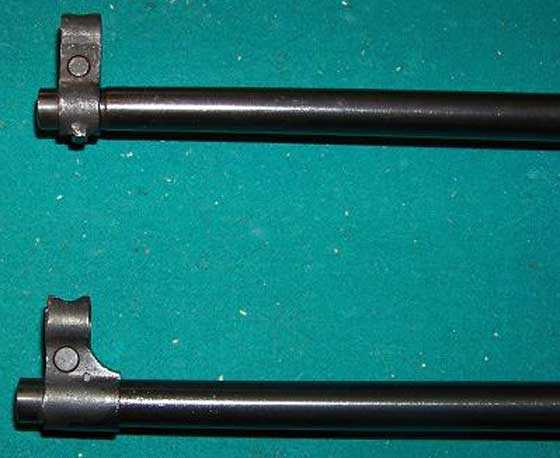 Again, Pointy is on the bottom, and its sight appears to be made a little better.

The wood finish on my gun is also a bit better overall, as is evident at the front of the stock (my gun is on top): 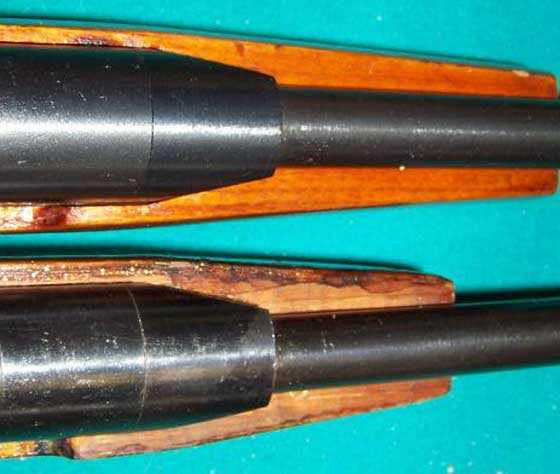 Moving back on the rifle, we come to the rear of the actions, Tom’s gun (bottom one in the first picture, top one in the next one) is again finished a little more sloppily. Behind that the stock is also thinner and shaped differently: 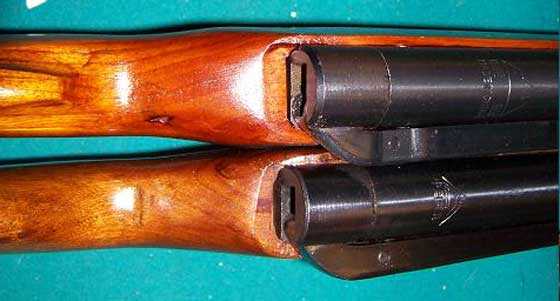 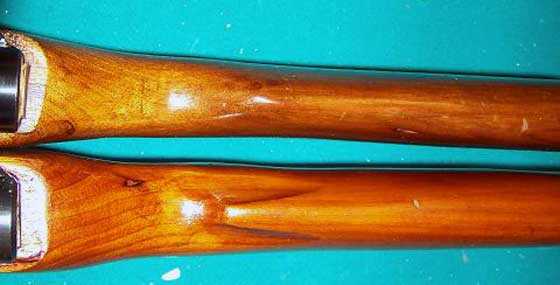 The rear sight details are similar, but not identical: 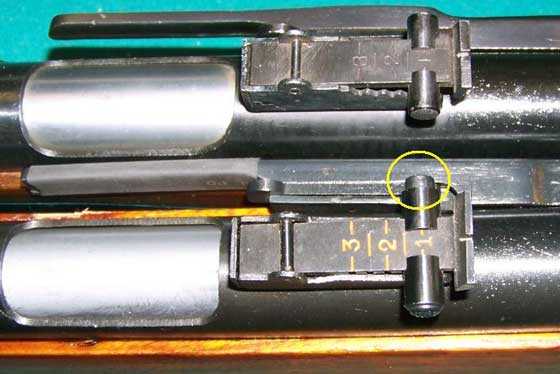 The biggest differences are in the painted numbers and in the little push-button that unlocks the slider on my gun. That button is a nice feature, as it makes it harder to accidentally move the elevation adjuster. Oh, and one other thing. They don’t use the same font for the numbers! That’s an important detail, you know.

I’m gonna make a bit of a leap here and try swapping stocks. This will tell me with fair certainty if the chassis of the guns are the same. I popped my action into Tom’s stock:

It’s a perfect fit, and the gun operates just fine.

So, now I’m 99% certain that these guns are more or less the same, but I’m going to tear down Tom’s gun and compare the parts, just to make sure.

When I pulled out the actions, I can see that they’re virtually identical, differentiated only by sloppier machining on Tom’s gun. Note in particular the uneven edge circled in the second picture: 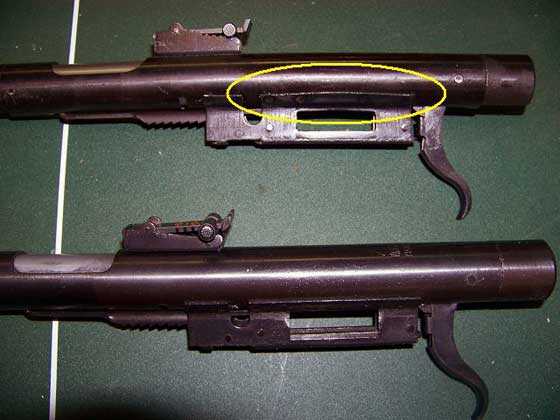 A note about the safety mechanism that both guns use.That ratchet is NOT really an anti-beartrap. All it does is prevent the lever from slamming closed if you let it go while cocking it. You’re not likely to have your fingers in the loading port at that time. As soon as you finish the cocking stroke, the ratchet toggles and disengages so you can close the lever.

However, there IS a proper beartrap that prevents the piston from releasing. It works directly on the trigger and blocks it from moving. This first picture shows the beartrap disengaged, as when the lever is in the firing position:

This is what happens when the lever starts coming back. The tang pointed out in the previous picture moves rearward and blocks the trigger, preventing it from moving. 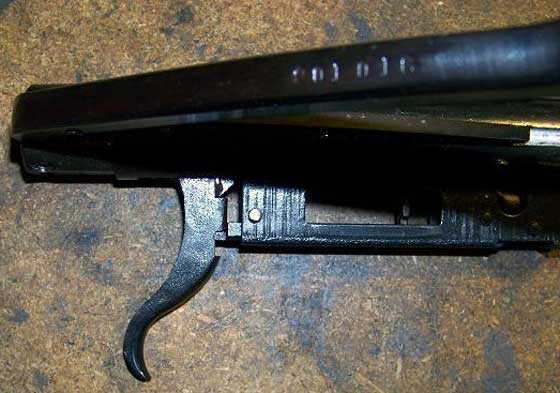 On a lot of guns, this sort of anti-beartrap is iffy at best. Some of the more sophisticated trigger mechanisms can still theoretically fire in case of mechanical failure even if the trigger is blocked. I actually had that happen to me with a Daisy Powerline 1000.

But, that’s far less likely on this gun. The direct-sear trigger has a lot of drawbacks, but its simplicity translates into a very predictable mechanism. If the trigger can’t move, the gun isn’t going to fire without a massive and very unlikely structural failure, such as the piston rod breaking or the pivot pin shearing. Even if it wears to the point where there’s no positive engagement angle between the mating faces, the worst it will do is go off when the lever is closed. But, while that lever remains open, that trigger — and, thus, the sear — ain’t goin’ nowhere!

Back to comparing the guns. That cocking lever does look a little different, and I tried installing Tom’s cocking lever into Pointy:

It fits fine, even though they’re not identical. Oddly enough, the lever on Tom’s gun is milled from a solid piece of steel while mine is stamped (Tom’s on top): 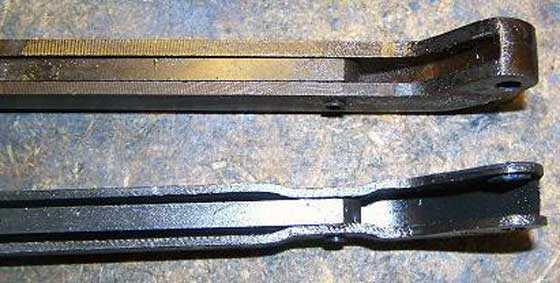 And the guts? Top picture is Pointy’s innards, the bottom is Tom’s innards (I mean his gun’s innards):

As noted before, more views of the stock show that while Pointy’s woodwork would look out of place on a Gamo, it’s still better than Tom’s: 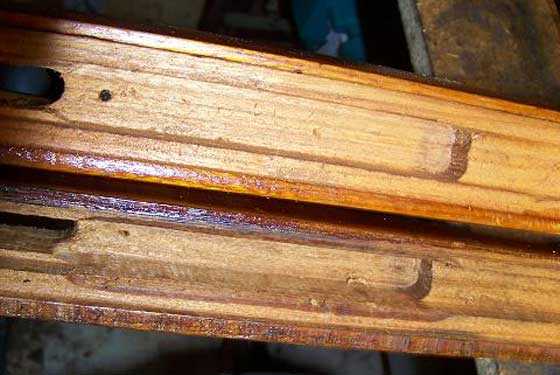 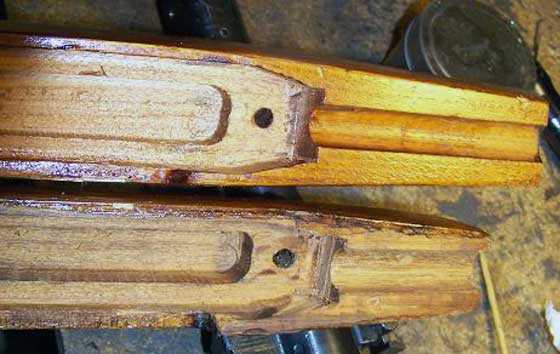 The fit of the action to the stock is also better on Pointy (on the right), but neither is anything to brag about: 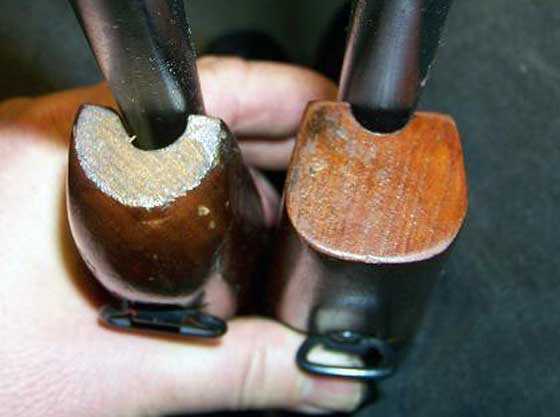 The one on the left is from Pointy; and while they’re physically interchangeable, the ones on Pointy are better made with a thicker, welded loop and a larger screw holding it in.

We’ve finally established with certainty that this gun is, indeed, a very close relative of Tom’s, and there’s little doubt that it is of the TS45 family. Different factories, certainly, and different factories might have almost inconsequential detail differences like those noted here, even when they build a gun to the same specification. But, maybe there are some consequential differences, as well.

Next step, of course, is shooting them. I’ll try them side-by-side using 6 different economy wadcutters. These are lower-powered guns, they’re cheap guns, so I’m using pellets that seem consistent with what would normally be fed to these rifles.

First, some impressions. In my opinion, Tom’s gun is actually nicer to shoot despite the shorter pull length. The firing cycle is smoother, and the slender stock seems nicer to hold. When I reassembled Tom’s rifle, I used a different lube on the inside — something a little thicker than I used on Pointy. Maybe that’s why the firing cycle is calmer. And, the milled, solid steel cocking lever on Tom’s gun…much nicer to hold and pull back. Pointy’s is sharp and still a bit uncomfortable after I covered it with a piece of heat-shrink tubing. But, Tom’s gun has a lever handle that’s rounded, smooth and not objectionable in the least.

Ultimately, we have to get back to where it counts: holes. Pointy’s targets are the top row on each paper. The first target shows the results with (left to right) Beeman Coated Wadcutters, Crosman Copperhead Wadcutters and Daisy Precision Max: 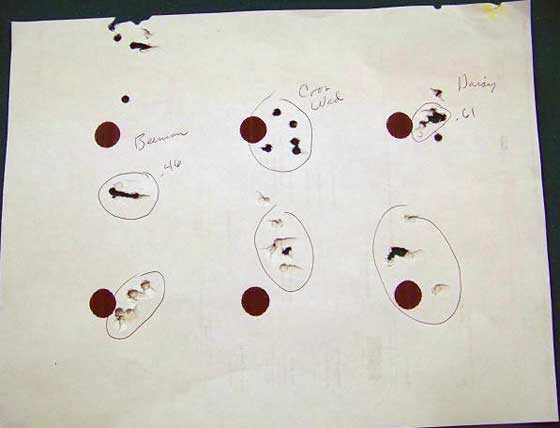 Pointy did fair with the Beemans and a little worse with the Daisys, while Tom’s gun didn’t do well with any of them.

The next three pellets are, left to right, the NEW Gamo Match pellets, RWS Basic (formerly Geco) and the OLD Gamo Match. 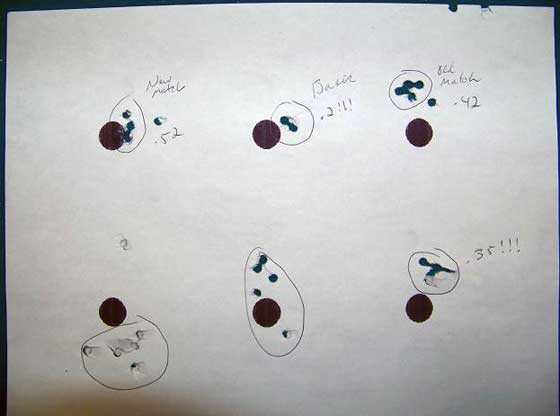 Pointy, oh, Pointy — How do I love thee? Let me count the ways: 1, 2, 3, 4, 5 into almost the same hole. You really were a lucky find! About two-tenths of an inch with the RWS pellets. But look at the third column for Tom’s gun. That ain’t bad, especially considering the oinker groups it tossed with everything else. Tom had also found that this gun performed fairly well with these pellets, while scattering others to the four winds.

Of course, the irony of these results isn’t lost on me. The only pellet that Tom’s gun seems to like is the one that’s been discontinued and is no longer available. Sheesh!

I suspect that Tom’s gun was really made for home market Chinese surplus of some sort, while Pointy was intended specifically for the export market. The English wording stamped into the tube and the fancier stock would seem to suggest that. As a side note, I’ve read a number of complimentary comments on the internet about the EMEI guns. If you happen to come across one, it might be worth a gander. You just might get lucky!