Today is accuracy day, when we see how well this Beretta 92FS air pistol can shoot. Let’s get right to it.

The range was 30 feet, and I shot 8 rounds per target because of the clip capacity. I also did an interesting experiment that may impress you. All shots are holding with two hands and off a rest. The gun never touched anything but my hands.

Sight-in
The pistol shot high and right at 30 feet, so I had to move the rear sight slightly to the left to compensate. The job went quick because once the Allen screw is loose, the sight moves easily in its dovetail. There was no solution to the high shooting, of course. This is with a six-o’clock hold on the 10-meter pistol bull. 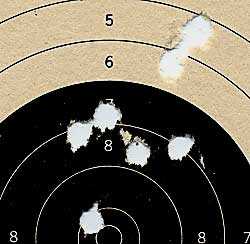 Eight Beretta Target pellets at 30 feet. A decent target, but not a screamer.

RWS Hobby pellets
The second pellet I tested was the RWS Hobby. It’s often quite accurate in various airguns, and showed some promise in this Beretta. 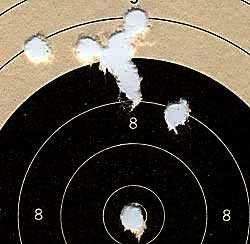 Eight RWS Hobbys went into a fairly tight group, save the one that pinwheeled the bull. Many inexperienced shooters will see that as the best shot, but of course it’s the worst. 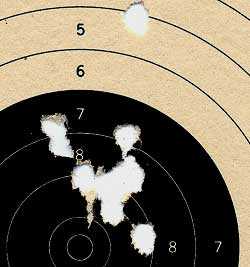 Beeman H&N Match High-Speed pellets were also promising, but, again, there was a stray.

Why all these stray shots?
I don’t know where these stray shots are coming from. I’m holding the pistol dead on the target, and I’m not calling any fliers. Up to this point, there seem to be one or more shots per clip that wander away from the main group. That seems to indicate a bad chamber in the clip…except for what happened next.

What happened next — the grand experiment
I know that the first few shots out of a CO2 cartridge or immediately following a bulk fill will be significantly more powerful than those that follow. That’s because some of the liquid CO2 is flowing into the firing valve and vaporizing there instead of inside the cartridge itself. The result is significantly greater power and recoil that you can feel. It’s a bad situation if you want consistency from the gun.

JSB Exact RS
Next, I loaded some JSB Exact RS domed pellets. I also changed the CO2 cartridge so the shots strings would all be at their maximum potential. In a lazy move, I didn’t exhaust the first three shots, so the gun was shooting with far greater power for those shots. The group I got shows the result. 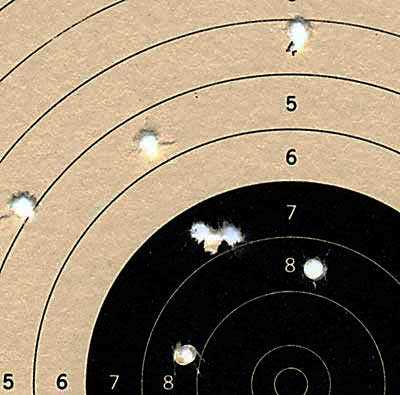 The group I got was surprisingly large; and since the first three shots had been so dramatically different than the last five, I decided to run a second target with the JSB RS pellet. 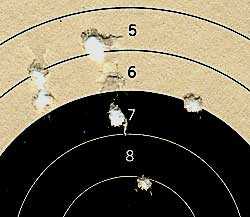 And, this is the same JSB Exact RS pellet just eight shots later. The pistol has calmed down, and real accuracy is now possible. This was the best group of the test, and it measures 1.086 inches across the centers of the two widest pellets. So much for the bad clip theory!

RWS R10
The last pellet I tried was the RWS R10 target wadcutter. This was the heavier rifle-weight pellet weighing 8.2 grains. 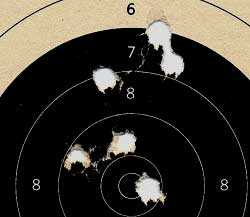 Eight RWS R10 pellets made only a slightly larger group than the JSB RS. Definitely a pellet worth pursuing.

Bottom Line
The Beretta 92FS air pistol from Umarex holds few surprises. It’s highly realistic, as are most Umarex airguns, and it performs flawlessly. I was hoping it might also be a sleeper in the accuracy department, like the Desert Eagle and the S&W 586, but no surprises there. It’s right in line with the majority of the Umarex action pistols, shooting 1- to 1.25-inch 8-shot groups at 30 feet with the best pellets. It was a fun pistol to test, and I hope I addressed all your questions.