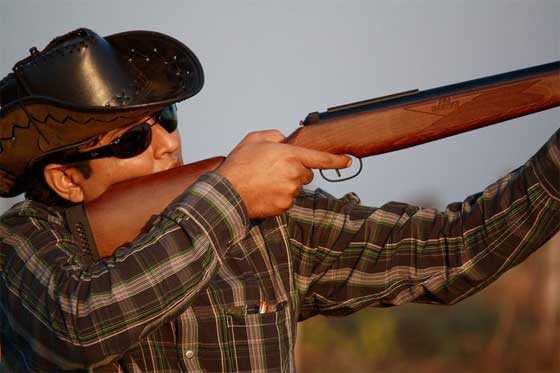 Even if you don’t live in California, this bill has the potential to affect you. Many of these guns are imported from China, Japan and Taiwan, and their ports of entry are in California. If the law passes in its current form, it will impose fines on those who distribute these guns if they aren’t clear or brightly colored. If this passes, it will embolden legislators in other states to pass similar bills — and perhaps even more stringent ones. To paraphrase an old saying, as California goes, so goes the nation. 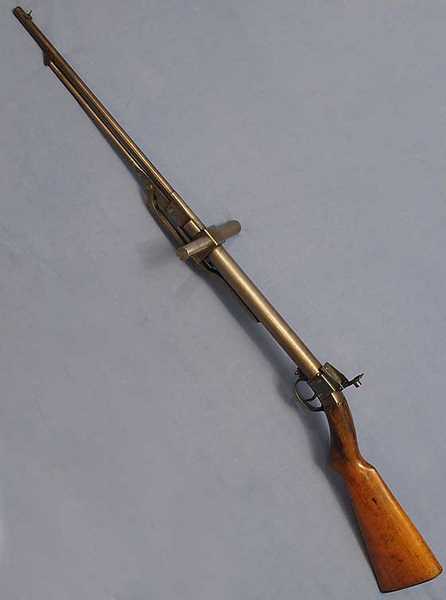 Have you ever seen anything like this? It’s a single-shot breakbarrel modified into an underlever repeater.

Blog reader Kevin asked for this report, but several other readers have also indicated their interest. It was Kevin who also gave it the nickname pogostick. It’s really a homemade repeating spring-piston airgun that was created by a mad-scientist airgunner more than 30 years ago.

In fact, almost the only historical information I have on the airgun is that it was bought over 30 years ago by the man I bought it from. It was always his plan to get it working again; but now that he’s in his 80s, he has other priorities and was open to an offer.

I visited him just before the Malvern airgun show, and I was in his gun room looking at both firearms and airguns this past April when the odd shape of this long gun attracted my attention. The owner brought it down and handed it to me, telling me a brief tale of how he came to own it. Like me, he was attracted to the strange mechanism, and I think after you see it today you’ll feel the same.

Description
The airgun began life as some model of a Diana breakbarrel, probably an old model 27. The Diana trademark and name can just be made out on the spring tube, but I haven’t been able to pin down the exact model yet. I’m guessing it’s a model 27 because of the size. Of course, I’m referring to the pre-war 27 that was made without a forearm, as most pre-war Dianas were.

No doubt who made the gun originally. The model will be harder to determine, though.

And yes, it was originally a breakbarrel. You can see that the person who modified the gun started by brazing the breakbarrel joint shut and grafting in a new mechanism. 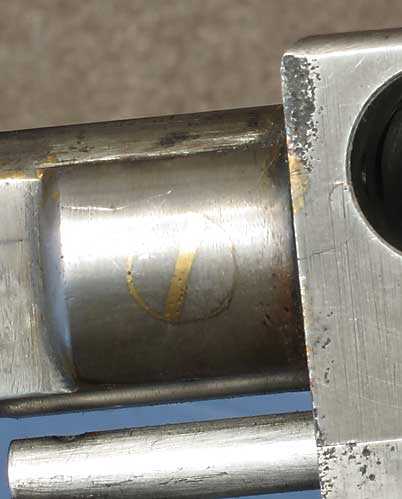 The pivot bolt was brazed in place. 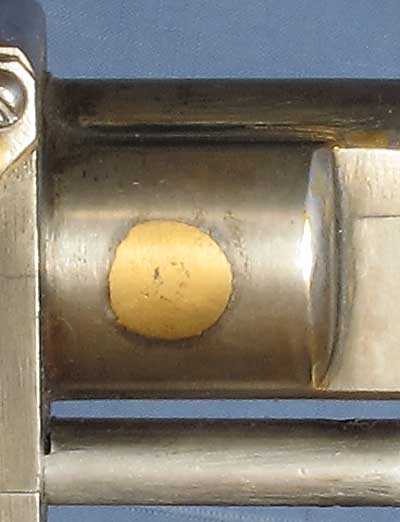 Right side of the pivot bolt.

After brazing the joint, it appears to me that he cut the compression tube and spliced in an action block that houses both the repeating mechanism and the magazine. You machinists will appreciate the level of skill it takes to cut a spring tube, graft in a block of steel, then reattach the front of the spring tube and keep the whole assembly in perfect alignment. It has to be aligned pretty well because the air transfer port in the back part of the tube has to shoot air through the sliding magazine and into the rear of the barrel that’s grafted on. If my descriptions don’t explain it well enough, the photos will.

Then, he had to create a separate underlever mechanism, find a way to attach it to the gun and rig a link that connects the underlever to the piston while bypassing the new block he’s grafted in. Once again, the pictures show this very well. 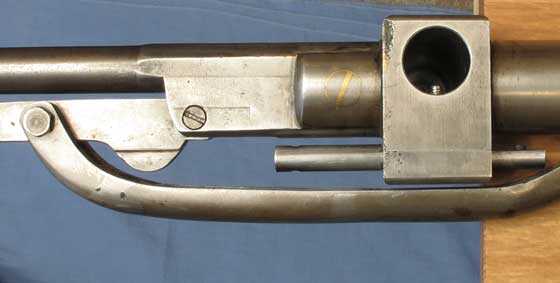 When the underlever cocks the gun, the cam on the lever presses the steel shaft straight back. It acts on one of the three pins inside the action. That detail is shown later. The straight shaft is missing a spring to return it to the front when the cocking lever goes back to the stowed position.

Now, we come to the difficult part! This mechanical genius, and I mean that as a compliment, devised a way for the spring-loaded magazine to advance every time the gun is cocked. That’s where the pogostick look comes from.

To the right side of the action, he attached a steel magazine housing for the cylindrical magazine that holds 6 pellets. The magazine fits into the mag housing under spring pressure, and an escapement mechanism of two separate pins allows the mag to advance to the left, indexing the next pellet each time the rifle is cocked. I call it an escapement mechanism, because a watch escapement is the closest thing I’ve seen to it. One pin drops down out of the way when the underlever is retracted all the way during cocking. That allows the mag to advance to the next pellet hole. When the underlever returns home, the pin that dropped away pops back up to lock the mag securely. A spring that is missing from the mechanism’s shaft takes care of moving the shaft.

The other pin behind this middle pin must also move for the mechanism to work properly, but I haven’t figured out how it works yet. It’s spring-loaded, so maybe that alone is all it needs. There’s a headless screw in the front of the mechanism to keep the cylindrical magazine on its track.

The magazine has detents cut into a track in the base. These detents are angled, so the pins that work the action can slide over them under spring pressure when the action is working. 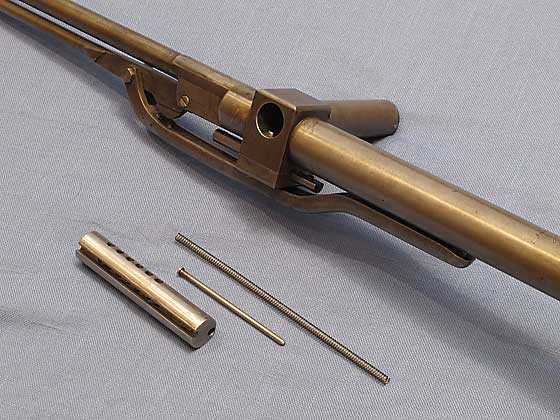 The magazine is shown out of the gun. The coiled spring and steel guide keep tension on the magazine when the gun is cocked. 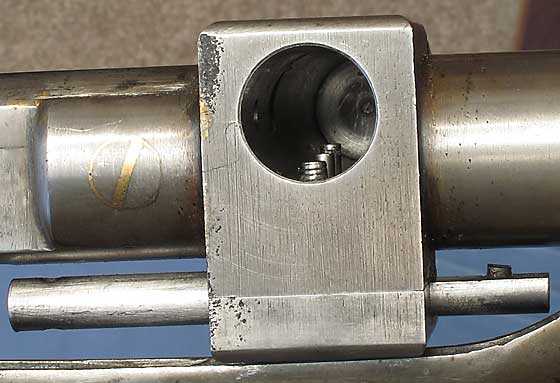 A look at the operating escapement mechanism. The front pin is solid and is just there to guide the magazine in its track. The middle pin is connected to the straight shaft under the gun and retracts when the gun is cocked, allowing the magazine to advance to the next pellet. The rear pin is under spring tension alone, and I’m not quite sure of its function.

This track in the bottom of the magazine keeps it on track. I took the photo on this angle to show the detail of the detents. You can see how they’re sloped to permit the magazine to advance under spring tension every time the gun is cocked and the middle pin drops out of the way. 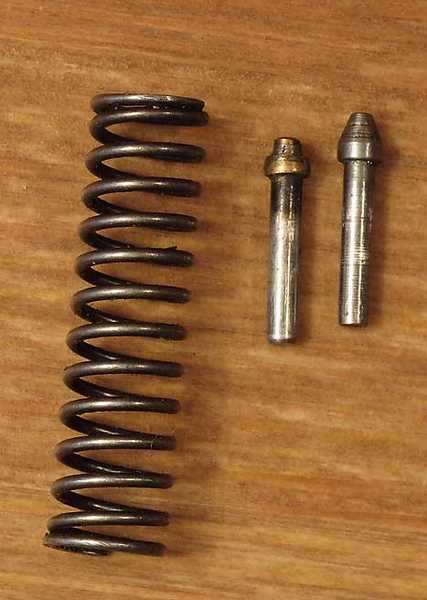 The gun is 42.25 inches long. A Diana model 27A that was made from 1936-1940 is 41.3 inches long, so this could be made from that gun. But there’s no way of knowing for certain without a lot of comparison with similar Dianas that are in original condition. This rifle weighs 7 lbs., 4 oz. with the magazine and spring installed. The magazine itself weighs 6.2 oz., being made of solid steel bar stock.

At the current time, the magazine is outside the gun and will not install because the inner spring-loaded pin stands too tall and will not compress out of the way. My buddy Mac thinks the mag is supposed to be captive and has to be installed from the right side of the gun; if so, that’s a cumbersome way to reload a repeater. I don’t think the guy who could dream up this contraption would leave a detail like that unaddressed.

The gun cocks with 22 lbs. of effort. The sear does catch. Since the magazine cannot be inserted, there’s no way to shoot a pellet. The trigger does release nice and crisply, though. There isn’t the hint of an anti-beartrap mechanism, so the gun can be uncocked.

But wait, there’s more!
Our mad scientist wasn’t satisfied just building this impossible mechanism. He also made both the front and rear sights. While the folding rear sight is crude compared to the rest of the work, it’s an aperture that adjusts for both windage and elevation, though the elevation adjustment is nothing more than a sliding part held by friction. It’s an extremely tight fit, so once you get it to the correct positio it won’t shake loose. 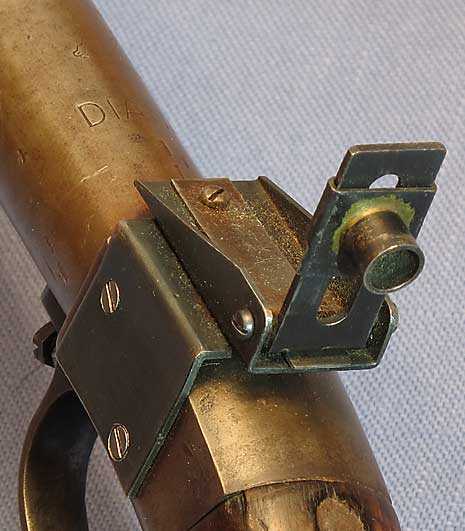 A simple yet quite effective adjustable peep sight. It adjusts in both directions and also folds flat.

The front sight is a tall, slender pin in a dovetail. The bead on top is small enough to do careful work, though I think the designer’s mind was more focused on getting the gun to work at all rather than on accuracy. 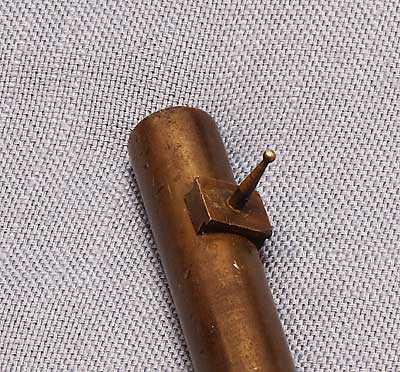 A tall, graceful front sight with bead. This is also homemade.

I cleaned the barrel, to see if there’s any rifling. As near as I can tell, there isn’t. This is a smoothbore. The Blue Book of Airguns, 9th edition, says the model 27A did come as a smoothbore. The sights are nice, but the gun doesn’t warrant them. The difference between a gun and a rifle is the presence of rifling, so this doesn’t qualify as a rifle.

Harmonica gun
Although I call the gun by the name Kevin gave it, the correct name for a repeater of this kind is harmonica gun, for obvious reasons. They exist as black powder firearms, as well as other airguns like the IZH 61 and certain target air pistols.

What to do next?
I bought this gun because I was compelled to own it. I just had to be able to examine this mechanism closer, to report on it and maybe even get it working again.

Well, I’ve examined it as far as I can without disassembly. Then, I took a long, introspective look at my schedule and realized that this is as far as I am probably ever going to go. Contrary to popular belief, I don’t sit around all day with screwdrivers, just taking apart airguns for my pleasure.

Like most of you, I would enjoy knowing if this gun can be made to work and would love to be able to give it a complete test with velocity and accuracy. Then, we’d really find out if our genius knew what he was doing. Short of voting eight days into a week, I don’t see it happening any time soon.

So, maybe in 20-30 more years, one of you younger collectors can add it to your collection.

148 thoughts on “The “pogostick” repeater”