Over to you, Fred!

by Fred of the Peoples’ Republik of New Jersey

When we left off in Part 1, I had made an aluminum pillar for my Nitro-Piston rifle stock and glued it into the stock. With my pillar installed, it was time to turn my attention to the bedding. Reading the kit instructions revealed something none of my research on YouTube brought up. First, there are three areas recommended for bedding – just behind the barrel where it connects to the action, by the trigger, and also at the tang or rear of the action.

The Battenfeld instructions said these are the principle areas to bed and would return the best results. They also recommended not doing the entire length of the action initially for another very important reason – you need the rifle to sit in the stock at the same height as it was designed to sit. If you tried to bed the entire length at the same time, you would need to remove material from the entire length of the stock. The action could then sit lower in the stock and could even sit unevenly, providing a tilt to the action. The kit instructions suggested going back after the initial bedding to modify the rest of the stock if desired.

You need to remove the finish from the stock so the bedding compound has optimum adhesion and build up a strong layer. With a marking pen, I drew lines where I would remove material from the inside of the stock. Kit instructions recommended removing at least one-sixteenth inch of wood. 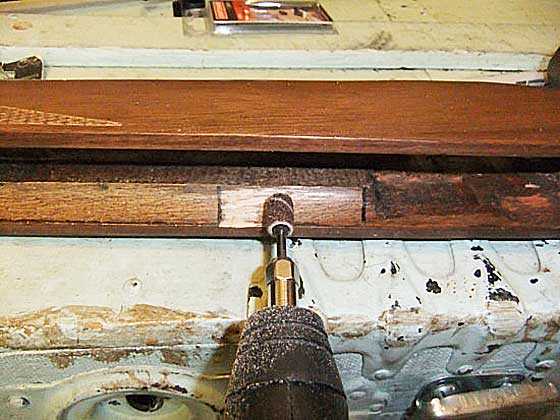 This is perhaps the handiest tool I own. A rotary tool used for sanding, grinding, carving and cutting.
[Note from B.B.: I don’t find it that handy, except for making firewood out of perfectly good stocks :)]

I used a Dremel with a sanding drum for the work. This really made short work of removing materials from the Chinese mystery wood from which the stock is made. 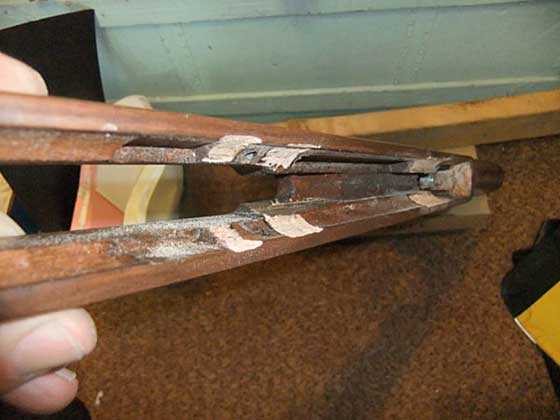 The three areas are now carved out of the stock and ready to receive the resin. The closest bare wood is where the stock forearm screws are located, the next area is just forward of the trigger, and the area that’s farthest away is the tang or very rear of the action.

Some adhesive tape was applied to the exterior of the stock near the areas that would receive the resin. This prevents any of the resin that might flow out from adhering to the stock.

Next was the preparation of the action. All fittings and trigger openings and other holes on the action were taped up with electrical tape. I could have used the modeling clay that was included in the kit, but this might have entailed more of a clean-up. The kit states that either precaution is fine. Following the masking, the action was entirely coated with a releasing agent. 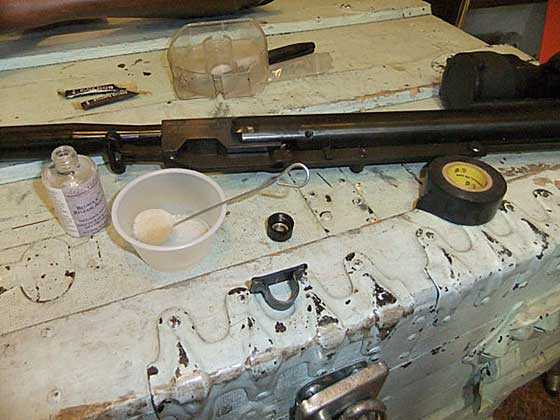 The releasing agent and applicator in the plastic cup. In the exact center is the recoil lug that fits around the rear action bolt and slides into the rear of the stock.

Then, I mixed the two-part resin. While the kit gives an approximation of how much each part of the stock should take, I mixed a teaspoon full of resin and hardener and still had mixture left in the cup when the whole job was done. It took less than the estimate.

The kit itself contains enough resin for several more rifles, should you decide to bed another rifle. Another ingredient in the kit are microscopic glass beads that are mixed into the resin. This is used to thicken the resin. The recommended viscosity is similar to warm peanut butter. I needed this thickness because the mixture was being applied to vertical surfaces, and I didn’t want it running down into the cocking lever chamber.

It’s recommended you use a dust mask when handling the glass beads because you don’t want to inhale this stuff. It probably wouldn’t ever come out of your lungs! The kit also provides dye for the resin, and I found that a single eyedropper-sized drop of resin provided a dark brown color. 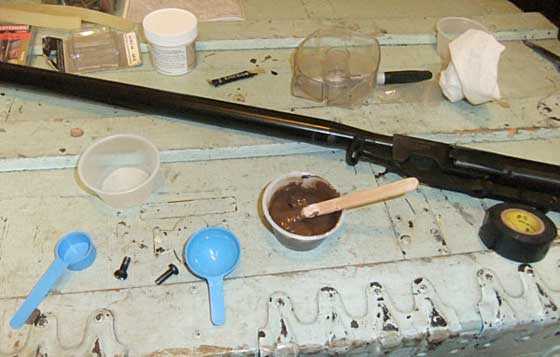 Here, you can see the measuring spoons provided with the kit and the resin mixed, dyed brown and ready to apply to the stock. The kit even contained the wooden mixing stick. Action openings were all sealed with electrical tape and coated with releasing agent, as mentioned in the text. 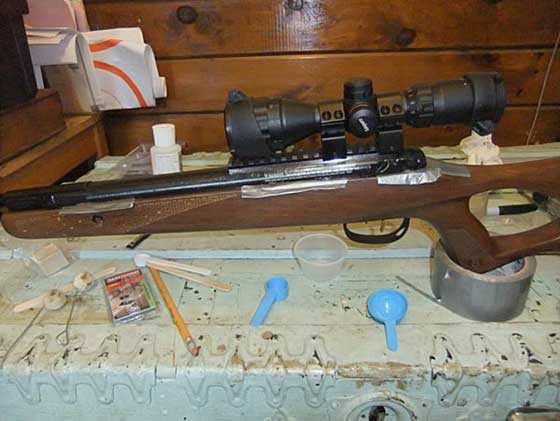 Action resting comfortably in the stock with the stock screws tightened. Duct tape has been applied to the stock to keep any oozing resin from contacting the stock. 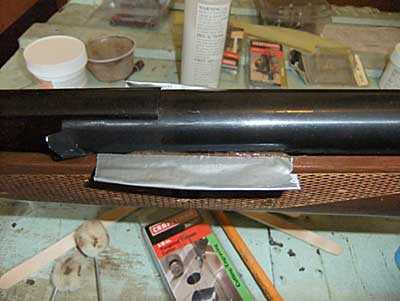 If you look closely, you’ll see some resin peaking out between the action and stock.

I removed all three screws; grabbing the action in one hand and the stock in the other, I pulled against the two. Nothing happened. The action was stuck tight in the stock! This is the very fear everyone imagines when starting a glass-bedding project for the first time.

After several minutes of pulling along different parts of the stock and action, I grabbed one of the forearms of the stock and pulled it away from the action. I was rewarded with a loud crack. It wasn’t the stock cracking, but the bond between the stock and the fiberglass giving way. I grabbed the other forearm with the same result. A bit more pulling and tugging and out popped my action! With the exception of the recoil plate which wasn’t coming out without some work with the Dremel and pliers, everything looked good.

Look how the resin flowed down the inside of the stock. That lug did not want to come out and seeing no reason it had to, I left it in place.

The action slid right back into the stock and, even without screws, did not move around. After cleaning off the little fiberglass compound that had adhered to the action, I assembled the rifle and tightened the screws. But I had to wait until the following Sunday to get to the local range.

After the bedding, I had to wait a whole week to get to my local shooting range, where I could test the rifle again from 30 yards. Once I got there, the results were a major disappointment, as the best group I could manage was 1.50 inches. That was no improvement whatsoever! 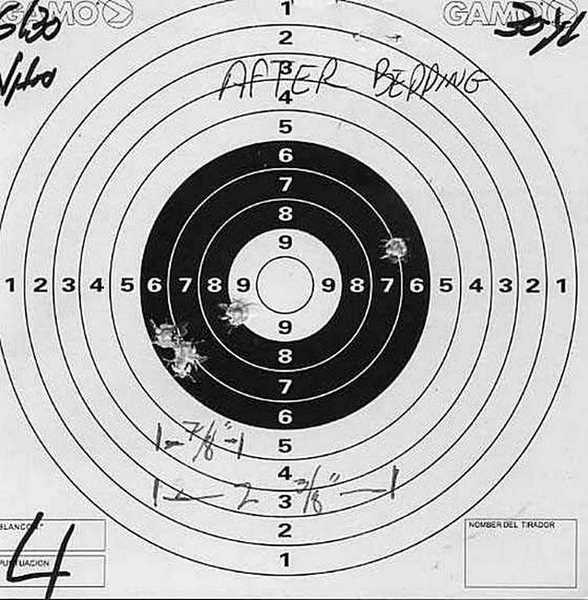 Like Mac in his review of this rifle, I was getting 3 or 4 pellets almost in a single hole or very close together, and then one or two pellets would ruin the group. I thought perhaps I had reached the limit of what this inexpensive Chinese made rifle can produce but I’ll explore a bit more. I’ll remove the shroud again to see if I have better groups with it off.

I’m wondering if the barrel pivot may have some play allowing a different barrel position to the action every time the rifle is cocked? Perhaps some shims might help?

I’ll let you all know if anything changes. What this has shown me, at least with this rifle, is that the action was already well-secured in the stock. While the glass bedding kit was an education and can be used again on other rifles with accuracy problems, it was no help with this particular rifle.

More to come
That was all Fred originally wrote for this report, but since then he’s done some additional exploring and has more to tell. Part 3 is coming! 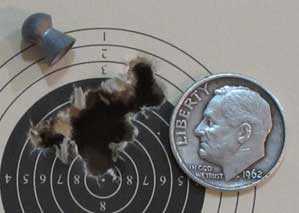