Announcement: Pyramyd Air’s facebook site was running a special Father’s Day Edition of the Big Shot of the Week contest. The winner is Holly Thoman Hearn, who posted the following, which we assume is her husband and son. Holly will receive a $100 gift eCard from Pyramyd Air. 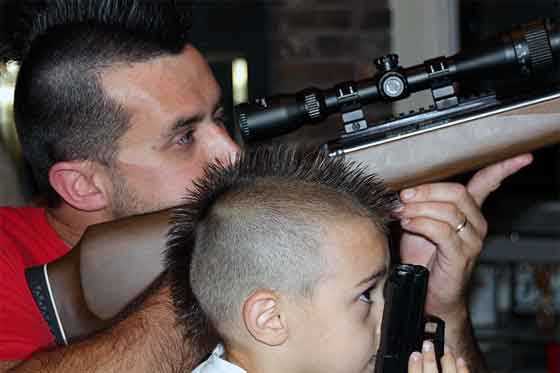 With the above photo, Holly Thoman Hearn won the 2011 Father’s Day Special Edition of the Big Shot of  Week contest.

Today’s guest blogger is Fred. If you’ve spent any time at all reading this blog and the comments, you already know that Fred is deeply involved in airgunning and loves to modify and improve his guns to get the most out of them. This time, Fred’s going to show you how he glass-bedded one of his Nitro Piston rifles.

by Fred of the Peoples’ Republik of New Jersey

In my last blog, I detailed how I did a recrowning job on my Benjamin Trail NP XL. This is a gas-spring rifle made in China for the Benjamin Company. I was able to reduce a 5-shot group from .80 inches to .40 inches. That was at 28 feet and was considered a successful modification by many who read the blog. However, at 30 yards, I was getting 1.50-inch groups. Not quite good enough for hunting at this distance. 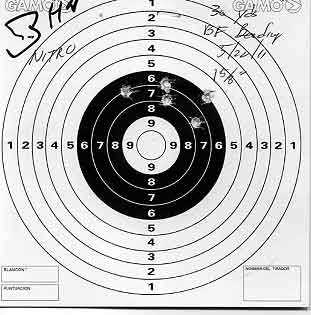 A representative target of what I was getting with the Benjamin Trail NP XL at 30 yards.

Our favorite Russian blog reader, duskwight, who has designed his own air rifle and is hoping a manufacturer will decide to take his design and bring it to life, suggested that my next step should be to glass-bed the rifle to prevent any movement between the action and the stock. Due to manufacturing tolerances, there’s normally ample room for play between the action and stock. The cheaper the rifle, the less care is taken in holding manufacturing tolerances to the engineers’ specifications and the less accurate the rifle. The process involves introducing a liquified fiberglass compound to the rifle stock and allowing the action to bed in as the compound flows around it and hardens, creating a custom fit that prevents the action from moving within the stock.

I started my research by going to YouTube and watching different gunsmiths – some pros, some amateurs, glass-bed their rifles. Next, I researched the glass bedding kits. After reading product reviews and the product manuals, I decided on  Miles Gilbert Bedrock kit from Battenfeld Industries. I selected it mainly because of the claim that their kit contained “the most comprehensive, illustrated instructions ever offered to take you from start to finish with your bedding project.” I was sold on this kit when I read that their kit included everything I could possibly need to bed my rifle.

To remove the Trail’s action from the stock, I have to remove 3 screws, one on either side of the stock, plus the rear triggerguard screw. With the screws out, the action fell out of the stock and my first confusion arose. When glass-bedding a centerfire rifle, all the YouTube videos showed the action typically resting on the bottom of the stock. There were no moving parts to be concerned with. Not so with the Trail. As with any breakbarrel rifle, you have a cocking lever and a guide for the lever moving within a channel carved into the bottom of the stock. In the Trail’s case, there was an additional lever connected from the end of the cocking link to the trigger assembly, which serves as the anti-beartrap device. The stock has a semi-circle inlet above this channel, and that’s where the action rests.

The curved part of the stock where the action rests. Below that is the channel for the cocking lever. 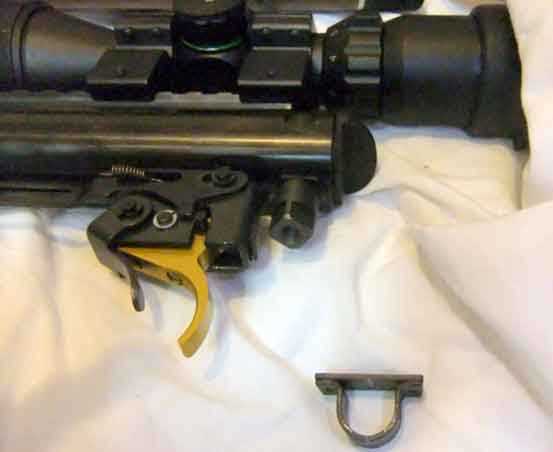 The rear of the action with the bolt that secures the trigger group. Foreground is the recoil lug that fits around that bolt and then slides into the rear of the stock. 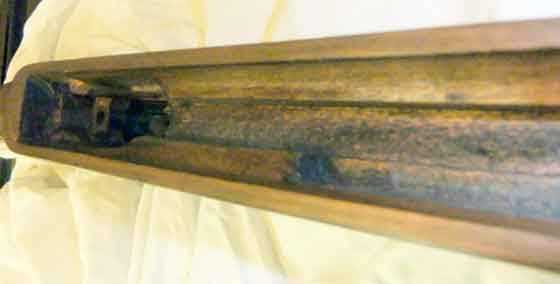 A closer look, front to rear, at the inlet for the cocking lever.

Where to put the bedding compound?
Another question. Many of the YouTube videos talked about pillaring the action. What this entails is drilling out the screw holes and inserting a piece of aluminum roundstock with a pre-drilled hole in it, with the end curved to fit against the rifle action. If you look again at the screw holes, only one — the rear trigger hole — has any potential for this improvement. The forearm screw holes are too thin for a useful pillar.

That rear screw hole is the only place to put an aluminum pillar.

First, I drilled a half-inch hole to enlarge that screw hole. Of course, the wooden piece forming the right (forward) part of the hole fell out. Next, I cut a piece of half-inch aluminum round stock using a mitre box to keep the cut end as square to the length as possible. 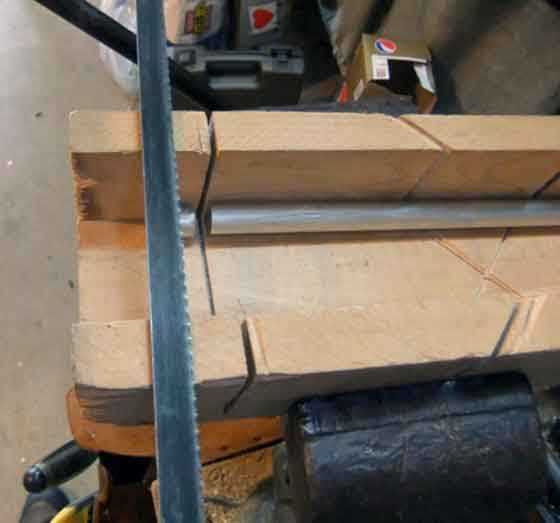 Aluminum round stock cut with hacksaw.

Using my handy dandy mill file and a T-square, I filed the end as flat as possible…at least within my set of skills. 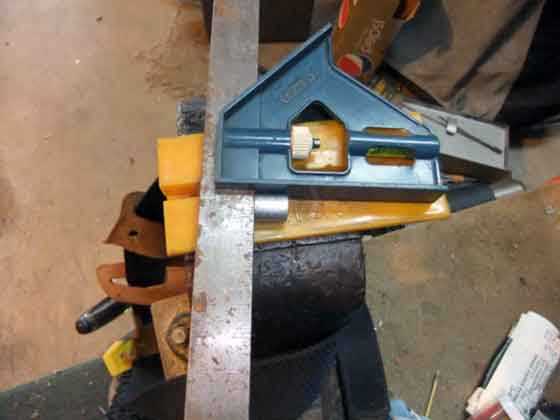 I actually got pretty close to making this surface perfectly perpendicular to the axis of the round stock.

Finally, I drilled an off-center hole (not by design), and my pillar for the rifle was complete. Using some epoxy, I glued the pillar into the enlarged screw hole in the stock. I figured I could always make another pillar and this time drill that hole centered — but wonder of wonders, everything fit! 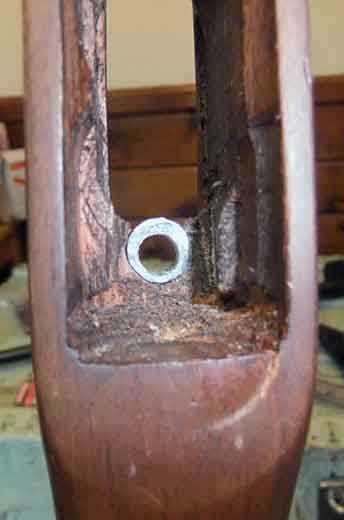 I used JB Weld to hold the pillar in the stock. Darned thing worked. Notice on either side of the pillar and toward the rear of the rifle is a slot for the recoil lug to slide into.