This report is a poignant one for me, because I also tested one of the first TF89 Contenders that came to this country. That was for the Compasseco website back in 2003, and I still remember that rifle. I said that the Chinese were finally nipping at the heels of Weihrauch, and that the Beeman R1 had reason to be concerned.

It’s now eight years later and the .177-caliber TF89 Contender I am looking at today (serial number 08638455) isn’t quite the same gun I saw in 2003. For starters, when I took this gun from the box, it was covered in thickened oil that had to be removed. I haven’t seen that in many years. A quick spritz of Ballistol over everything, followed by a thorough wipedown with a cotton rag removed the old oil and got the rifle to a clean, dry state; but it was something I haven’t had to do in a long time.

Fit and finish
The metal is no longer deeply polished like that first one was. This one has a matte finish on all the metal parts and an even black oxide over that. You could call it a hunter finish.

The wood is very well shaped, and I can find no spots of wood filler that used to be the forensic evidence of a Chinese airgun. The cheekpiece is low and looks melted into the butt like most European stocks these days. A Monte Carlo profile on the comb raises your eye to the requisite height for using a scope, though the rifle comes with open sights.

The wood stain is a very dark reddish-brown that is even everywhere. The stain is so dark that the grain is difficult to see outside of bright sunlight; but when you do see it, it appears to look like beech — a very tight grain.

There are panels of pressed checkering on both sides of the pistol grip and forearm. They’re shallow and the diamonds are small with rounded tops, so the effect is not very grippy.

The buttpad is not finished even with the stock, which is a surprise when everything else is done so well. It stands slightly proud of the stock in places and is separated from the wood by a thin black plastic spacer. At least it isn’t white! The pad is soft and gummy and looks like it will provide a smooth, non-slip surface for standing the rifle in the corner and on your shoulder.

As for the fit, it’s very nearly perfect. Where the Chinese breakbarrels used to fall down was their actions were always rotated a few degrees in the stock, so the cocking link rubbed one side of the cocking slot. Nothing like that here. Every place you look, the wood is fitted just as well as a European air rifle.

The triggerguard is the one piece of plastic that stands out on the whole rifle. It’s wide and well-shaped, so it doesn’t look bad — but a touch reveals what it’s made of.

Size and handling
This is a large air rifle. It’s certainly in the magnum class for length and weight. The rifle weighs almost 7-3/4 lbs., which is not heavy by magnum air rifle standards; but it’s big enough that you know you’re holding something substantial. The stock is wide, filling your hands and conveying the big-rifle feel. The length is a hair past 46 inches, which puts it two inches past the 03-A3 Springfield. Because we have a fair number of new readers coming over from the world of firearms, I think it’s important that they realize just how large these magnum spring rifles can be.

The pull of the stock is 14-7/8 inches, which makes it feel great to me, but may be a trifle too long for many shooters. The 03-A3 Springfield, by comparison, is only 12-3/4 inches, but they always did have a reputation for being too short in that department.

When I hold the rifle to my shoulder, it balances fine for me. It reminds me of an RWS Diana 350 Magnum, which is another rifle that feels great in the offhand position.

The ball detent that holds the breech shut has a very powerful spring behind it, requiring you to slap the top of the muzzle to break the barrel open for cocking. The specs say the cocking effort is 28 lbs., but it feels like a little more to me. I’ll measure it when I test the velocity.

Although the rifle is designed for a right-handed shooter, the stock is shaped to fit a left-handed shooter, as well. Since it’s a breakbarrel with a central safety ahead of the trigger, lefties should find it relatively comfortable to shoot.

Sights
The front and rear sights are fiberoptic, and the front has no protection for the red fiber element. Too often, I’ve seen these get damaged from normal handling. The front sight that holds the element is aluminum instead of the much more common plastic, so it may be a bit more rugged; but I’d still like to see a hood over the sight. There’s no groove in the ramp to accept one, however. 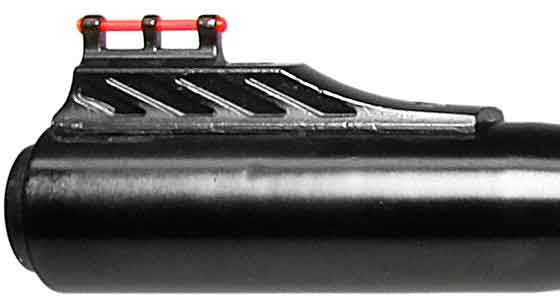 The rear sight is all metal, and both adjustments have clicks that can be felt if not heard. The elevation is a wheel that needs no tools, but the windage does require a screwdriver. That isn’t so bad; because once you get the rifle sighted in, you don’t want that adjustment to move, anyway. 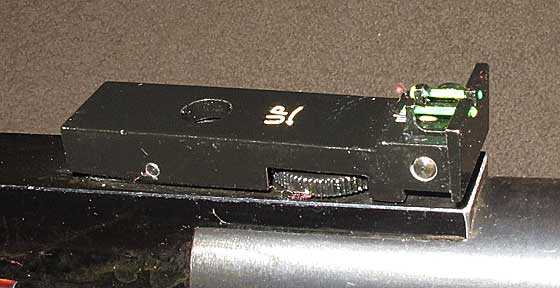 The rear sight adjusts in both directions with positive clicks.

Because it has such nice sights, I’m thinking that I’ll do an accuracy test at 10 meters with open sights before mounting a scope for a separate second accuracy test. That will give the rifle more of a chance to break in and me a better opportunity to become familiar with it.

A pair of 11mm dovetails is cut directly into the top of the spring tube. Tech Force provides a mounted scope stop from the factory. A rifle like this is expected to be scoped, so the presence of good open sights is a pleasant plus.

Safety
The safety, which is a short blade in front of the trigger, is automatic; but by cocking the barrel lightly, you can actually cock the gun without setting the safety. If that happens, it means there’s no anti-beartrap device; so it’s imperative that you hold the muzzle when loading the rifle. If you put your finger near the trigger when the barrel is open, the action could snap shut faster than you can react and damage or even remove digits from your hand.

I couldn’t resist shooting just a few shots to see how the rifle feels. There’s a lot of forward recoil and some vibration on the shot, though not as much as the power would make you believe. This rifle is advertised as 1,100 f.p.s. in the .177 caliber I’m testing. We’ll see how close it comes in part two.

The final observation I’ll make today is that the price of the rifle has dropped by $30 from 2003. That’s a plus you don’t see that often. If this turns out to be an accurate air rifle, it could easily move to a position of great importance, based on that price.

Best pellet of all?