The Tech Force TF99 Premier underlever air rifle is a large, powerful spring gun. This model has evolved a lot over the years.

Before we begin today’s report, I have a special sale to announce. Pyramyd Air has a super special deal on two spring air rifles.

Today, we’ll look at the accuracy of the Tech Force TF99 Premier underlever air rifle. Some assumptions I made in Part 2 have to be changed after today’s test, but I’ll get to that.

Short scope dovetail
For starters, the TF99 has a very short dovetail for the scope mount, so one-piece mounts are mostly too long. I had to use a two-piece BKL one-inch, double-strap, high-profile ring set to mount the Leapers 3-9x50AO scope. The high mount gave me good clearance for the 50mm objective, but I had to hold my head higher on the comb to see the image in the scope.

Cleaned the barrel before shooting
I decided to go ahead and clean the barrel before testing with J-B Non-Embedding Bore Cleaning Compound on a brass brush run through the bore 20 times in both directions. Since this rifle has a sliding compression chamber, I had to enter the barrel at the muzzle. I put a cleaning patch over the air transfer port hole when the breech was slid back to prevent any dirt or cleaning compound from entering the compression chamber. The bore was loose and did not resist the brush like most new barrels do, so this bore is on the large side of normal.

Sight-in
I then sighted-in the rifle at 10 feet, prior to backing up to 25 yards. I used my special 10-minute sight-in procedure that works so well.

Some difficulties encountered
The rifle I’m testing has a lot of barrel droop, but the scope mount is not set up to compensate for it. Rather than spending another hour to re-do what I’d already finished to get to this point, I used a writer’s trick that works very well. The next time you think you have a scope problem, try doing this.

My groups were spread out laterally, and in a couple cases were falling into two distinct groups. That’s a classic sign of a weak erector tube spring, the cure for which is to adjust the scope’s elevation downward. So, I adjusted the elevation knob down 40 clicks and the lateral spread went away. Of course, my groups are nowhere near the point of aim. Since this test is just to determine the relative accuracy of the rifle, all I care about is how tight the groups are — not where they land. If I were going to shoot this rifle at targets, I would have to mount a drooper scope ring set to compensate for the droop so the scope could be adjusted normally.

Another difficulty I had was discovering how to hold the rifle. I tried it several ways with the off hand back by the triggerguard, but the TF99 doesn’t seem to want to be held that way. Then, I slid the flat of my palm out to the beginning of the cocking slot and that was where the rifle shot best. I remember when Mac tested the Browning Gold a few weeks ago that he found the same thing. Sometimes, you just need to play with the rifle until you discover its secrets.

Pellets tested
I tested a lot of different pellets while learning the secrets of this rifle, and I shot 10-shot groups with each pellet at least one time. With several of the pellets, I shot more than one group. Rather than show a bunch of large groups that were used to diagnose how the rifle likes to be held, here are the pellets I tested:


Right off the bat, I’ll tell you that the RWS Hobbys are not the right pellet for this rifle. All other pellets tested seemed to group about the same, and the Beeman Kodiaks were the best of all I tested. But even with all the techniques and tricks, the TF99 is not a tackdriver. It’s capable of producing about a one-inch, 10-shot group at 25 yards under the best conditions. And, only Beeman Kodiaks were able to do that. The others seemed to group into 1-1/8-inch groups or slightly larger at the same distance. 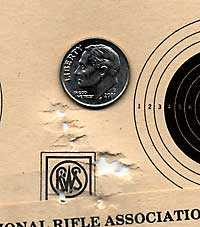 Ten Beeman Kodiaks made this group that’s 0.946 inches between centers at 25 yards. The aim point was at the top of the target, about four inches above the impact point because the scope was adjusted down to eliminate erector tube bounce.

Velocity
I said I would retest velocity after the accuracy test because the rifle was dieseling during the initial velocity testing. Well, the dieseling continues after this test as well, and the 7.9-grain Crosman Premiers that averaged 956 f.p.s. in the first test now average 961 f.p.s. The spread went from a low of 951 to a high of 965 f.p.s., so the rifle hasn’t changed much even after 100 more shots have been fired. I think this is a rifle that needs a 1,000-shot break-in.

Firing behavior
The rifle has low recoil for its power, but it vibrates more than a little. I got used to a buzz after each shot.

The flat underside of the stock allows this rifle to lay very well on your off hand. It felt very neutral during accuracy testing, once the correct balance point was found.

The trigger is a single-stage and surprisingly crisp, though very heavy at the same time. I didn’t appreciate how it felt during velocity testing, but it came through loud and clear in this test. It’s a bit too heavy for the absolute best work, though I don’t think it cost me more than 1/8 inch in any of the better groups.

General impressions
The bottom line is that the TF99 underlever is a well-made, powerful underlever with reasonable accuracy if you do your part. It certainly isn’t a tackdriver, but it’ll hit a walnut or a cookie at 25 yards every time when the right pellet is used.

The right pellet, among those I tested, turned out to be the heavy Beeman Kodiak that I said I would not use in part 2. I said that because a spring-piston airgun generally likes medium and lightweight pellets best, but that was what I got wrong. This rifle likes the heavy pellets best, and it only came out when it was shot for accuracy.