You readers have been very patient waiting for the next installment on this report! For that, I thank you. This project is taking a long time because it isn’t on the front burner (it probably isn’t even on the stove!) and because this is the kind of project in which you must “make haste slowly.”

Last time, I described the gun (it’s a smoothbore, so it’s not a rifle) and told you some of the general, as well as some specific, history of this particular example. Today, I want to honor Mr. Duskwight, our Muscovite blog reader who’s actively building a recoilless spring-piston rifle of his own design! Duskwight became fascinated with the performance of the Whiscombe air rifle and decided he could build one. Many of us have said similar things, but in this case the conviction remained even after he sobered up; and he’s spent many long months and a LOT of money making his dream come true.

By watching what happened to him, we’ve learned just how difficult and risky it is to build something from scratch. You don’t just tackle the technical job with all its intricacies and challenges. You also take on the entire socio-economic profile of your society, enduring substandard work, business failures, technical incompetence and on and on.

What I’ll show you today has one additional complexity added to the story. The builders didn’t have access to modern machine tools! Most of what you are going to see was made with files and hand labor. The metal hardening was done using a forge and eyeball, carefully judging the state of the metal by its color. If anything had to be timed, they did it with a pocketwatch instead of a digital timer linked to a time standard.

And the design came from someone’s head! There probably were no drawings in the “factory,” which was really just a quiet workshop. If they required anything to go by, there were possibly pattern parts that journeymen makers copied. While it’s true that what you are going to see is very simplistic, don’t make the mistake of thinking that it’s simple to do! Each part has to fit, and each part has a specific job to do if the whole item is to work as intended.

Enough talk, let’s see what this baby looks like. The first thing I will show is the new crank that Dennis Quackenbush made for the rifle.

Like the gun itself, this crank looks deceptively simple. It’s just a gear and a handle to turn it. Yes, but that gear isn’t as simple as it appears. Dennis has made cranks like this before, so he thought this one would be straightforward. He asked me for the width of the hole the gear fits into, as well as the width of a second hole on the inside of the gun that serves as a bearing for the crank once it’s inserted. I gave him those two dimensions, and within a month he sent me a pinion gear with instructions to try to fit it to the rack gear inside the gun.

I did, and it was a no-go. Dennis thought it would simply be a case of cutting a new gear that had more teeth; in his experience, these gears had one of only two different numbers of teeth on the pinion gear. Unfortunately, that wasn’t it, either! We were stumped. He had to see the gun.

We met at this year’s LASSO shoot, and he got the chance to examine the gun. When he did, he discovered that the rack gear in my gun is different from any other he’s seen. Apparently, David Lurch, who made the gun, had a better idea. He filed the rack gear teeth on a bias; as the crank is turned, the handle is also pulled tight against the mechanism because of the angle of the meshing teeth. A straight-cut gear cannot mesh with teeth cut on a bias, even when the number of teeth are the same because they aren’t set at the correct angle.

This time, Dennis took the gun home with him so he could cut the new pinion gear to the corresponding angle. He delivered the new crank assembly at the Malvern airgun show, and as you can see, it fits perfectly. He intentionally did not harden the new pinion gear because he wanted it to be the sacrificial part on the gun. The gun’s rack gear is hardened. If anything fails in operation, it’ll be this gear, which can always be remade. But he didn’t stop there. 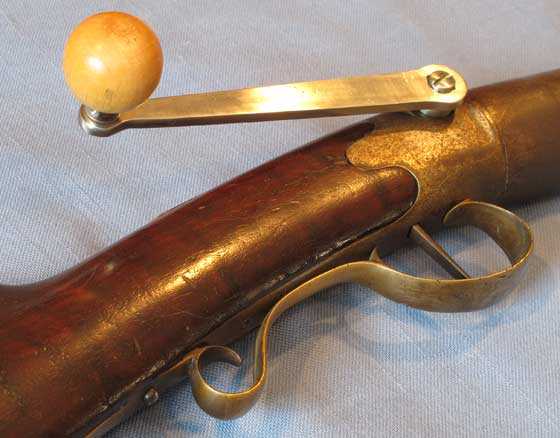 The crank Dennis made fits the gallery gun very well. It’s still shiny, but I will take care of that with a browned finish later.

The crank turns the pinion gear, which engages the rack gear attached to the piston, withdrawing it as the springs are compressed.

Dennis contacted collector Larry Hannusch, who was kind enough to disassemble one of his Primary New York City gallery dart guns and remove the double volute spring mechanism so Dennis could have a look at it. Larry had seen my gallery gun at the Malvern airgun show the year before and was quite taken by it — as most collectors are. It’s not that this is an especially beautiful example, or that it’s extremely rare. It’s just that each one of these guns was made by hand, so every one is a collection unto itself. Just as Duskwight will be forever proud of all the effort he puts into his new rifle, so we can appreciate all the labor and skill that went into making one of these dart guns in the 1860s.

Larry brought the spring mechanism from his gallery gun and Dennis took measurements. He plans on making a new double-volute mainspring assembly for my gun. This will be the first time he’s made one of these springs; and to my knowledge, it hasn’t been done in recent times. It’s very possible that someone has made one and just not written about it, of course; but as far as I know, this will be the first time a double-volute mainspring has been made and documented in modern times. The documentation is important. How are we going to know about these old dart guns if we can’t test them? And nobody seems to be writing about them, so I guess I’m going to be the first one.

Last year at Malvern, Larry Hannusch showed me how to disassemble my gun. It proved about as easy as disassembling a Garand, but I had shied away from trying because of the age of the airgun. I really thought the gun would be fragile. But after seeing how things go together and how robust the parts are, I have confidence that I can work on this gun just as easily as I would a modern spring rifle.

A gallery gun works just like any other spring-piston airgun. The piston is driven forward by springs, rapidly compressing air in front of it that pushes the dart out the barrel. The big difference in this Lurch gallery gun is that the piston is very large (over 1.5-inches in diameter), and the piston stroke is quite long (about three inches). Those volute springs I thought were so fragile are probably far more robust than coiled steel wire springs. Seeing them up close and examining their potential travel gave me a new appreciation for the ingenuity of these old gun makers.

This is a gallery gun piston with its two volute springs and a spring guide that you cannot see. Notice that this piston seal doesn’t look like mine, which you’ll soon see. Mine is a replacement that needs to be trimmed.

The rear spring has been removed, and you can now see the spring guide that sits between both springs. Notice the piston rod is the rack gear that the crank works with to cock the gun.

Here you see how a volute spring works. It’s a coiled steel bar that’s pulled into this cone shape before hardening. It’s incredibly strong, plus it has a huge length of travel before becoming fully compressed.

This is the piston assembly with springs and spring guide. The tiny notch seen on the side of the piston rod opposite the rack gear teeth is the sear notch, properly called the “bent” at the point in time this gun was made. That’s what the trigger holds onto!

Are you enjoying this so far? Well, there’s more to come. Now, I’ll disassemble my gallery gun and show you the parts we’ve been talking about. 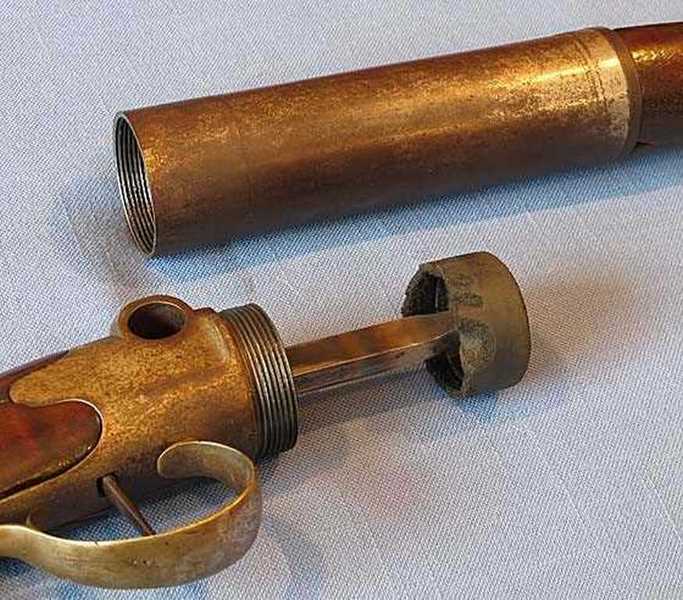 The compression chamber simply unscrews from the action of the gun. There’s no fastener holding the two assemblies together other than the threads seen here. You can actually see the color-hardening of the piston rod that has the rack gear teeth, but I’ll show it closer. 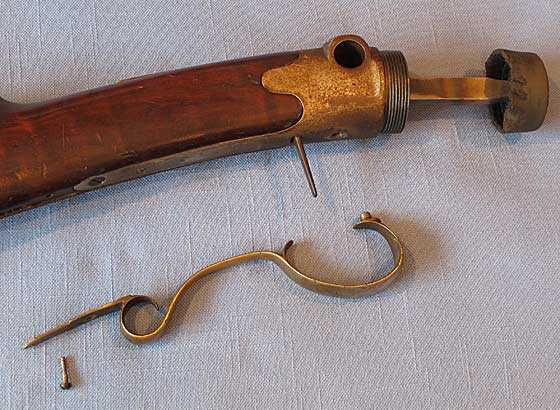 The rear screw is removed from the triggerguard, which is then unscrewed from the action. The front of the hand-filed brass guard is a screw!

Two screws are removed, and the wooden butt is separated from the action. You can see the rear of the piston rod in this view.

In this view, you can see the entire piston rod. The sear notch is also visible, opposite the rack gear teeth. Each gear tooth was filed by hand. Notice how much excess leather hangs down from the piston head. 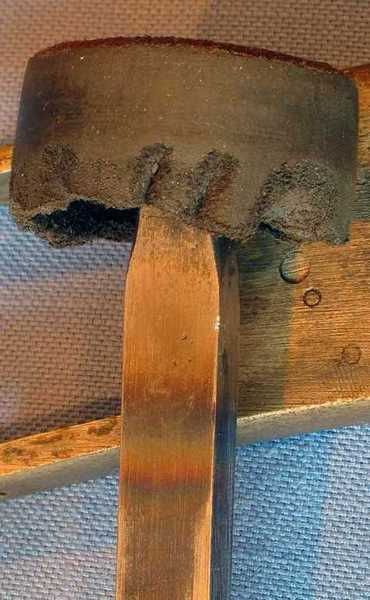 The piston rod was hardened to a medium blue, which is pretty hard! The excess leather on the seal really stands out.

Here you can see that the gear teeth were cut on a bias to pull the cocking crank tight into the gun when it’s wound.

The side of the brass triggerguard still shows the marks of the maker’s file that shaped the piece to fit the gun after it was cast.

Well, that’s what the inside of a 150-year-old handmade airgun looks like. Dennis is going to make a pair of volute springs for me, but in the meantime I may try to get the gun operational with a coiled steel spring. It won’t be ideal, but it may provide me with a platform for testing the darts that I’m going to have to make.

The caliber appears to be exactly .25, as a .256 bullet will stop after entering the breech. So, I may be able to find large .25-caliber pellets that fit, and there may even be a .25-caliber dart I can find.

The bore is pretty ugly from the neglect of more than a century, so that will be my next task. I don’t know when I will return to this airgun again, but you can rest assured that it’s in the queue.

I found my silver dime!
In other news, my silver dime has returned! It was hidden under a Post-It note on a desk I’d used temporarily when changing computers several weeks ago. So, you will be seeing silver soon.